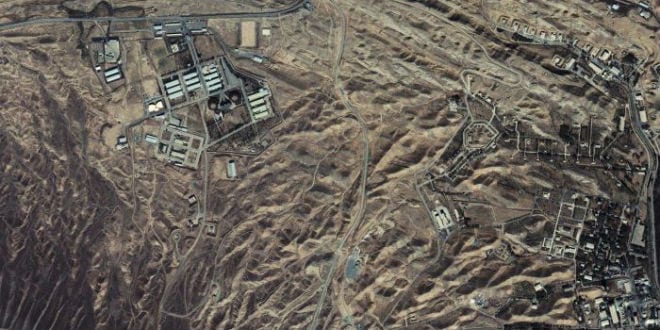 A large explosion was reported in the Parchin military base on Thursday night at 11:21 p.m. local time about 20 miles southeast of the capital Tehran. Defense ministry spokesman Davoud Abdi told state TV the blast happened at a gas storage facility in a “public area” of Parchin rather than the military base. The fire had been put out and no casualties had been reported, he added but gave no details about the cause of the blast.

“Our colleagues are present on the ground and investigating the incident carefully,” Abdi said.

First video report of a massive explosion with red light around Tehran, heard by many residents. Reports of a military outpost around there. #Iran pic.twitter.com/lQT4CPFLUC

At about the same time on Thursday night, a large explosion at the local power station left half of the city of Tehran without electricity.  Some Iranians speculated on social media that the explosions were caused by Israeli cyber attacks.

Just as a side note, we had explosions of power stations in Shiraz an hour ago. Whether it has anything to do with it I do not know.

Some rumours talk of a cyber attack by Israelis on power infrastructure in Iran.

In July 2015, there were claims based on satellite imagery that there was activity in the Parchin military complex associated with nuclear weapons.

UN and international inspectors were denied access to the sit and Iran denied the claims saying the satellite photos were fabricated. In 2014, the New York Times reported that a large explosion at the site was a case of sabotage by foreign intelligence agencies.. In 2018, Israeli intelligence captured an archive in Tehran with proving the Parchin site was a key part of Iran’s ongoing nuclear weapons research and development program. This archive contained documentary evidence that in 2003 Iran was operating a nuclear weapons program, codenamed the AMAD Plan, which aimed to build five nuclear weapons and prepare an underground nuclear test site. Parchin was a key part of that program, used for a specialized, difficult to develop, neutron initiator to start the chain reaction in a nuclear explosion. Some of the equipment is believed to be held ready for later use, potentially when Iran’s 2015 nuclear accord with the six world powers expires.