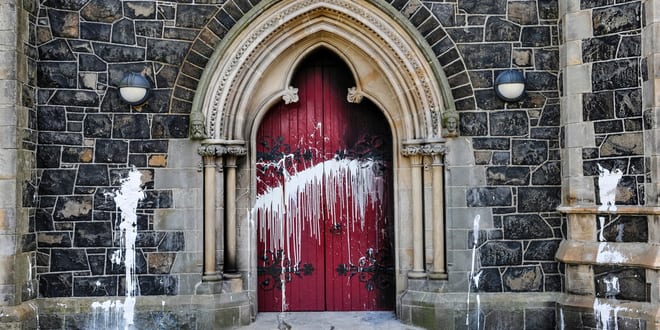 Yes, I think the statues of the white European they claim is Jesus should also come down.

They are a form of white supremacy.

In the Bible, when the family of Jesus wanted to hide, and blend in, guess where they went?

King tweeted again. calling for the destruction of stained glass windows, murals, and other parts of churches and buildings that depict Biblical figures as white. In yet another tweet, King posted what he thought was a likely portrayal of a decidedly swarthy yet non-negro Jesus.

Experts have long since said this is likely the most accurate depiction of Jesus.

White Americans who bought, sold, traded, raped, and worked Africans to death, for hundreds of years in this country, simply could not have THIS man at the center of their faith. pic.twitter.com/Mn1pOCR233

“White Americans who bought, sold, traded, raped, and worked Africans to death, for hundreds of years in this country, simply could not have THIS man at the center of their faith,” King wrote.

King is a writer, civil rights activist, and co-founder of the left-wing Real Justice PAC. After college, he worked as a high school teacher and later pastored at a church he founded in Atlanta called Courageous Church.

Though King claims to be racially black, the man listed on Shaun King’s birth certificate as his father was revealed last year to be white. King responded by saying that his mother had confided in him that he was the result of an extramarital affair and his real biological father was a light-skinned black man.

King has been accused of raising funds for causes that were never received by those he was fundraising for. In 2019, King led a social media campaign to find the drive-by killer of seven-year-old Jazmine Barnes. Initially portraying the killing as racially motivated and posting a photo of a white man, it was later discovered that the men allegedly connected to Barnes’ death were black.

In May 2018, King led a campaign against a white Texas state trooper, spreading the false claims of a black woman arrested for drunk driving who lied about Hubbard raping her during a traffic stop.

King played a major role in the “Hands up, don’t shoot movement” that came in response to 2014, shooting of Michael Brown in Ferguson, Missouri. When the evidence revealed that there was no evidence that Brown was in the act of surrendering and was, in fact, attacking the police office, King insisted that the actual circumstances were irrelevant to his claims.