UN Tries to Hide their Support for Antifa

Home » UN Tries to Hide their Support for Antifa 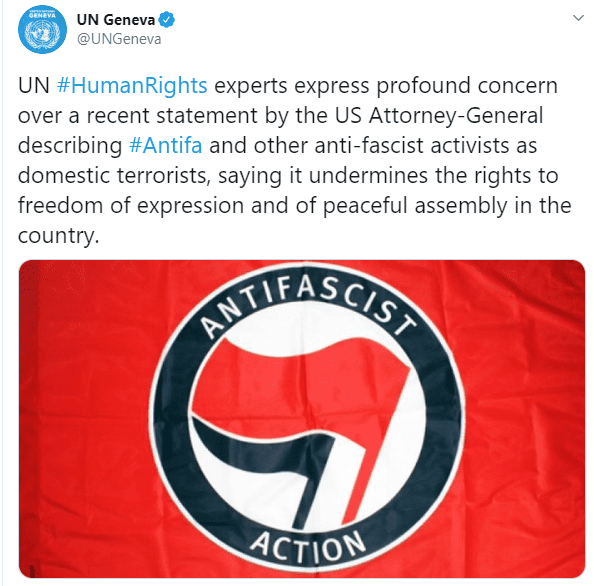 On Friday, United Nations “experts” released a statement criticizing the decision by the Trump administration to label the violent Antifa protests as domestic terrorism. The UN claimed the violent riots, looting, and armed takeover of a large section of Seattle were protected by  “rights to freedom of expression and of peaceful assembly

“International human rights law protects the right to freedom of expression, association and peaceful assembly,” said Fionnuala Ní Aoláin, the UN Special Rapporteur on the promotion and protection of human rights and fundamental freedoms while countering terrorism.   “It is regrettable that the United States has chosen to respond to the protests in a manner that undermines these fundamental rights.”

The tweet was initially posted on the UN’s Twitter page along with an image of the Antifa flag but after a wave of negative reactions on the social media platform, the image was removed. It is interesting to note that last week, Facebook removed a post by President Trump which included the Antifa symbol. Facebook justified the move saying the symbol was used by the Nazis.

During the ongoing George Floyd protests and the coincidental riots and looting, President Trump and Attorney General William Barr blamed Antifa for orchestrating the mass protests, repeating the call to label the group as domestic terrorists.

“It is time to stop watching the violence and to confront and stop it. The continued violence and destruction of property endangers the lives and livelihoods of others and interferes with the rights of peaceful protesters, as well as all other citizens,” AG Barr stated last month.

In the UN letter, the current High Commissioner  for Human Rights, Michelle Bachelet, expressed concern “regarding structural race discrimination in the US, particularly in the realm of policing.” She noted that labeling the violent Antifa movement as domestic terrorism would “only sharpen divisions and accentuate tensions, fuelling further human rights violations.”

Following the statement, the United Nations Human Rights Council agreed on Friday to commission a report on systemic racism and discrimination against black Americans.

“If the Council were serious about protecting human rights, there are plenty of legitimate needs for its attention, such as the systemic racial disparities in places like Cuba, China, and Iran,” Pompeo said in a statement Saturday.

In 2018, the Trump administration withdrew from the UN Human Rights Council. America’s then-Ambassador to the United Nations, Nikki Haley, said at the time: “This step is not a retreat from human rights commitments. On the contrary, we take this step because our commitment does not allow us to remain a part of a hypocritical and self-serving organization that makes a mockery of human rights.”

While claiming to oppose fascism, Antifa, actually a loose conglomeration of informal autonomous groups, does not attempt to conceal their agenda of violent direct action rather than policy reform. This action involves property damage, physical violence, and harassment against those they deem to be fascists, racists, and the far-right. Individuals involved in the movement tend to hold anti-capitalist views, subscribing to a range of left-wing ideologies such as anarchism, communism, social democracy, and socialism.

Nancy Pelosi, then-House Minority Leader for the Democratic Party, condemned the violence of Antifa activists in Berkeley in August 2017 and in July 2019, Republican Senators Bill Cassidy and Ted Cruz introduced a resolution that would designate Antifa a domestic terrorist organization.