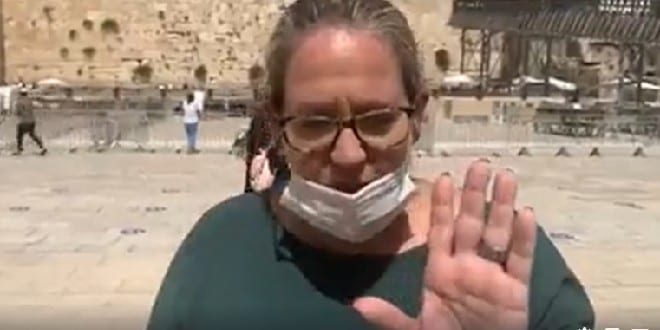 The global Luciferian movement called for events all over the world on Sunday during the solar eclipse. Most notably perhaps was the event scheduled to be held at the Western Wall in Jerusalem which called for a Satanic Third Temple as part of the process to bring peace between Israel and the Palestinians.

The marches, held in dozens of locations around the world, are intended to create chaos. Most of the protests will take place at city capitols and it has been speculated by some that demonstrators may even try to erect satanic monuments at existing sites where Confederate and other allegedly racist statues have been torn down.

The organization has chapters all over the world and marches were held in multiple locations on Sunday. The invitation for the main march for the US in Raleigh North Carolina calling for a New World Order did not mention the Temple in Jerusalem or peace between Israel and the Palestinians.

The event coincided with a rare ring-of-fire annular solar eclipse just hours after the annual summer solstice. Luciferians believe that a solar eclipse is a good omen portending the rise of evil since it a chaotic event in which the regular laws of nature are subverted. It is in fact and in ideology the victory of the moon and darkness over the sun and light.

The summer solstice marks the beginning of summer in the northern hemisphere and the beginning of winter in the southern hemisphere. It marks the point at which daylight is at it most extreme longest.  many Satanic and idolatrous rituals are related to the lunar and solar cycles. Summer solstice is a high holiday for Luciferians, a celebration of the Roman god Saturnus.

The Western Wall Heritage Foundation which administers the site responded to an inquiry about the event, saying, “We have no knowledge of the group or the event but anyone can come pray at the kotel (Western Wall).”

A group of Israeli believers in Jesus were at the Western Wall, waiting to confront the Luciferians however none appeared at the appointed time. One of the Jewish participants explained that Christian eschatology as described in the New Testament describes a subversive attempt to create a unified world order in the end-of-days. For this reason, they were on hand to pray for the Luciferians and to try to convince them “through love” to abandon their goal.

Breaking Israel News reporter was on-site to report on the event. He saw a group of fewer than ten people wearing black t-shirts with satanic symbols. The Luciferians did not enter the Western Wall Plaza and it is unclear whether they held their event.

In its discussion of eclipses, the Talmud (Sukkot 29a) specifically described solar eclipses as being a bad omen for the nations who base their calendars on the solar cycle. At the end of this section describing the omens contained within eclipses, the Talmud states a disclaimer: “When Israel does the will of the place (God), they have nothing to fear from all of this,” citing the Prophet Jeremiah as a source.

Though associated with Satanism, a philosophy based on the Christian interpretation of the fallen angel, Luciferianism differs in that it does not revere merely the devil figure or Satan but the broader figure of Lucifer, an entity representing various interpretations of “the morning star” as understood by ancient cultures such as the Greeks and Egyptians. In this context, Lucifer is a symbol of enlightenment, independence, and human progression and is often used interchangeably with similar figures from ancient beliefs, such as the Greek titan Prometheus. In The Satanic Bible, Lucifer is described as one of the four crown princes of hell, particularly that of the East, the “lord of the air“, and is described as the bringer of light, the morning star, intellectualism, and enlightenment. For Luciferians, enlightenment is the ultimate goal. The basic Luciferian principles highlight truth and freedom of will, worshipping the inner self and one’s ultimate potential.