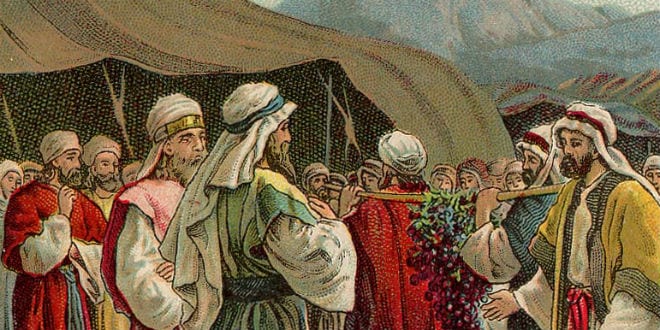 The first solar eclipse of 2020, a rare annular eclipse, will appear in the heavens over Israel on Sunday, precisely coinciding with the anniversary of the day that Moses sent 12 spies into the Land of Israel.

The eclipse will be visible for a very short time in a 60-kilometer wide path traversing Africa and the Central African Republic, Congo, Ethiopia, Pakistan, India, and China. The eclipse will begin to be visible in Israel at 7:26 AM local time, reach its peak one hour later, and disappear at 9:26. The sun will be 99% obscured by the moon, making the sun’s corona appear as a ring of fire around the dark circle of the moon. Israel experienced a very brief ring of fire eclipse last December during the holiday of Hannukah.

An annular eclipse occurs when the Sun and Moon are exactly in line with the Earth, but the apparent size of the Moon is smaller than that of the Sun.  Hence the Sun appears as a very bright ring, or annulus, surrounding the dark disk of the Moon. This is, essentially, the opposite of a supermoon, when the moon is close to the earth making it appear larger. Sunday’s annular eclipse is especially rare as it comes in the summer. The Earth’s orbit around the Sun is elliptical, making the Earth’s distance from the Sun vary throughout the year. This affects the apparent size of the Sun. When Earth is at its farthest distance from the Sun in early July, a total eclipse is somewhat more likely, whereas conditions favor an annular eclipse when Earth approaches its closest distance to the Sun in early January.

SUNDAY’S ROLE AS AN OMEN

Rabbi Yosef Berger, the rabbi of King David’s Tomb on Mount Zion, emphasized that eclipses, both solar and lunar, are described in Jewish tradition as being powerful omens.

In its discussion of eclipses, the Talmud (Sukkot 29a) specifically described solar eclipses as being a bad omen for the nations who base their calendars on the solar cycle.

At the end of this section describing the omens contained within eclipses, the Talmud states a disclaimer: “When Israel does the will of the place (God), they have nothing to fear from all of this,” citing the Prophet Jeremiah as a source.

Indeed, the complete solar eclipse that transversed the continental United States in August 2017 ushered in the most devastating hurricane season in US history.

“Indeed, a solar eclipse on Sun-day, the Christian sabbath, is particularly concerning,” Rabbi Berger said. He noted that Saturday night begins the 29th day of the Hebrew month Tammuz, marking the 3,332nd anniversary of Moses sending 12 spies into the Land of Israel (Talmud Taanit 29a, Seder Olam Rabbah). Their subsequent ‘bad report’ was the basis for all of the Children of Israel, save Joshua and Caleb, being forced to wander in the desert for 40 years until they died in the wilderness.

It is interesting to note that in a paper published in the scientific journal Astronomy and Geophysics in 2017, researchers from England’s Cambridge University confirmed a theory that Joshua’s miraculous ‘stopping of the sun’ during a battle to allow the Israelites more time to defeat their enemies was actually an annular solar eclipse identical to the one that will appear on Sunday.

“Normally, this would be an internal concern, a time for Jews to introspect on their connection with the Land of Israel,” Rabbi Berger said. “The sin of the spies was their rejection of the Land of Israel. Jews who refuse to come to Israel despite the obvious benefits of the country are certainly reenacting the sin.”

“However the eclipse adds an additional element clearly intended as an omen for the nations,” Rabbi Berger said. “Joshua made two errors. He did not entirely conquer the land, choosing to relinquish some parts, The Gibeonites sent emissaries under false pretenses, thereby tricking Joshua into making a treaty. This is similar to nations and leaders who are making alliances or gestures of friendship with Israel with the intention of tricking us into going against Biblical law by giving up land in Israel.”

“This eclipse is clearly a warning to the nations that the Jew were commanded to live in all of Israel,” Rabbi Berger said.