Can Pro-Israel Democrats Hold Off an AOC Clone?

Home » Can Pro-Israel Democrats Hold Off an AOC Clone? 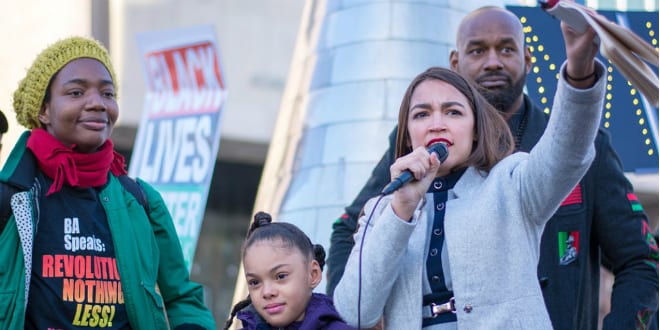 Up until now, the Democratic Majority for Israel has had a pretty good year. The ability of former Vice President Joe Biden to defeat Vermont Sen. Bernie Sanders and a number of other candidates who were less than sympathetic to the Jewish state was a major accomplishment for the group.

That victory buttresses the group’s claims that talk about the Democrats drifting away from Israel is exaggerated. But later this month, the DMFI will face its sternest test yet when a vulnerable Rep. Eliot Engel (D-N.Y.) faces off against a left-wing challenger. When the votes are finally counted in his district that covers the northern Bronx and Southern Westchester County, we’ll have a much better idea about whether a candidate like Engel—a staunch liberal on domestic issues, but a stalwart supporter of the Jewish state—can still survive in a deep-blue district dominated by the minority voters that are the heart and soul of the 21st-century Democratic Party.

DFMI, led by veteran Democratic campaign strategist Mark Mellman, and its SuperPac were formed last year in reaction to the growing success of the party’s increasingly vocal and numerous left-wing base. Though a majority of the party’s congressional caucus remain generally supportive of the Jewish state, the ability of radicals like Reps. Alexandria Ocasio-Cortez (D-N.Y.), Ilhan Omar (D-Minn.) and Rashida Tlaib (D-Mich.) to not only win House seats, but to also become celebrities admired by the liberal mainstream media presents centrists with a dilemma.

A Biden presidency may return relations to the shaky situation that existed when the administration in which he served exited office when Barack Obama left. It is also certain to mean a second round of appeasement of Iran, as Democrats reverse all of President Donald Trump’s pro-Israel stands.

Another problem is that at the local grassroots level, left-wing activists, and especially those in minority communities, are increasingly being won over by intersectional arguments that falsely depict Israel as an oppressor colonialist state that is morally equivalent to American racists.

In 2018, the left scored an impressive coup when AOC, then an unknown pro-Sanders activist, upset Rep. Joe Crowley (D-N.Y.), a member of the House Democratic leadership in a primary. She then went on to become a virtual rock star of the national party, championing radical ideas like the Green New Deal and now the “defund the police” movement in the wake of the George Floyd killing.

Democrats know that they retook control of the House in 2018 by electing moderates in swing districts, not by going farther left. But just such a swing to the left may be about to take place in Engel’s district.

Engel is chairman of the Committee on Foreign Affairs, where he wields significant influence and can ensure that radicals—like Omar, who was given a seat on the key panel, despite her support of BDS and anti-Semitic utterances—don’t advance an anti-Israel agenda there.

Nor is Engel like many Democrats who oppose Israeli policies while still avowing their support of the country. Indeed, his positions resemble more those of the Likud Party than the Democrats or Republicans, making his continued tenure at Foreign Affairs a crucial matter for friends of the Jewish state.

But right now, Engel, who has held his seat since 1988, is in serious trouble.

After 32 years in Washington, he is a bit complacent and out of touch with his district. Though the 16th district has a significant Jewish population with an estimate of 11.7 percent of voters there, it is a majority minority district with 34 percent of its eligible voters being African-American and 24 percent Hispanic.

The district’s minority voters have gone along with the choice of the party establishment for years. But as was the case with AOC’s upset of Crowley, whose district’s makeup was roughly similar, that acquiescence may crumble once an energetic minority candidate is ready to challenge a white incumbent.

In Jamaal Bowman, Engel now faces the toughest primary challenge since he was first elected, with the added problem that AOC is going all in to help his opponent. In the post-Floyd atmosphere, the left wing of the party is energized. It has also made minority voters more likely to resist appeals to stick with a 73-year-old Jewish incumbent, rather than to vote for a young progressive black like Bowman.

Bowman has already gotten a boost from some New York politicians looking to woo minority voters in order to gain a leg up in next year’s mayoral race, while fellow New Yorker Senate Minority Leader Chuck Schumer has chosen not to endorse his longtime colleague. And he’s gotten adoring press from liberal organs like The New York Times, where columnist Michelle Goldberg, who is known for her anti-Zionist beliefs, as well as her desire to help AOC purge moderates from the Democratic Party, has weighed in on his behalf.

If that wasn’t enough, a hot mic moment in which Engel said, “If I didn’t have a primary, I wouldn’t care,” about a Hispanic official speaking on his behalf made it clear that his sense of entitlement would be held against him.

Bowman beating Engel won’t destroy support for Israel in Washington by itself. But it would be one more piece of evidence that a generational shift is pulling Democrats further away from their former position as strong backers of Israel. And with each replacement of a pro-Israel stalwart by a radical who, like Bowman, thinks Israel is a violator of human rights that must be pressured into making concessions its voters consider suicidal, the trend will continue to accelerate.

The Democrats who hope to celebrate Biden’s inauguration next January are not the same party that inaugurated Obama. Without Engel and others like him, that means the shift to the left means there will be far less of a check from Congress on the foreign-policy establishment that Biden will empower to reverse Trump’s pro-Israel and anti-Iran stands. That’s something that should concern friends of Israel on both sides of the aisle.