Emergency Plan Formulated to Save Israel’s Mountain Gazelles from Extinction 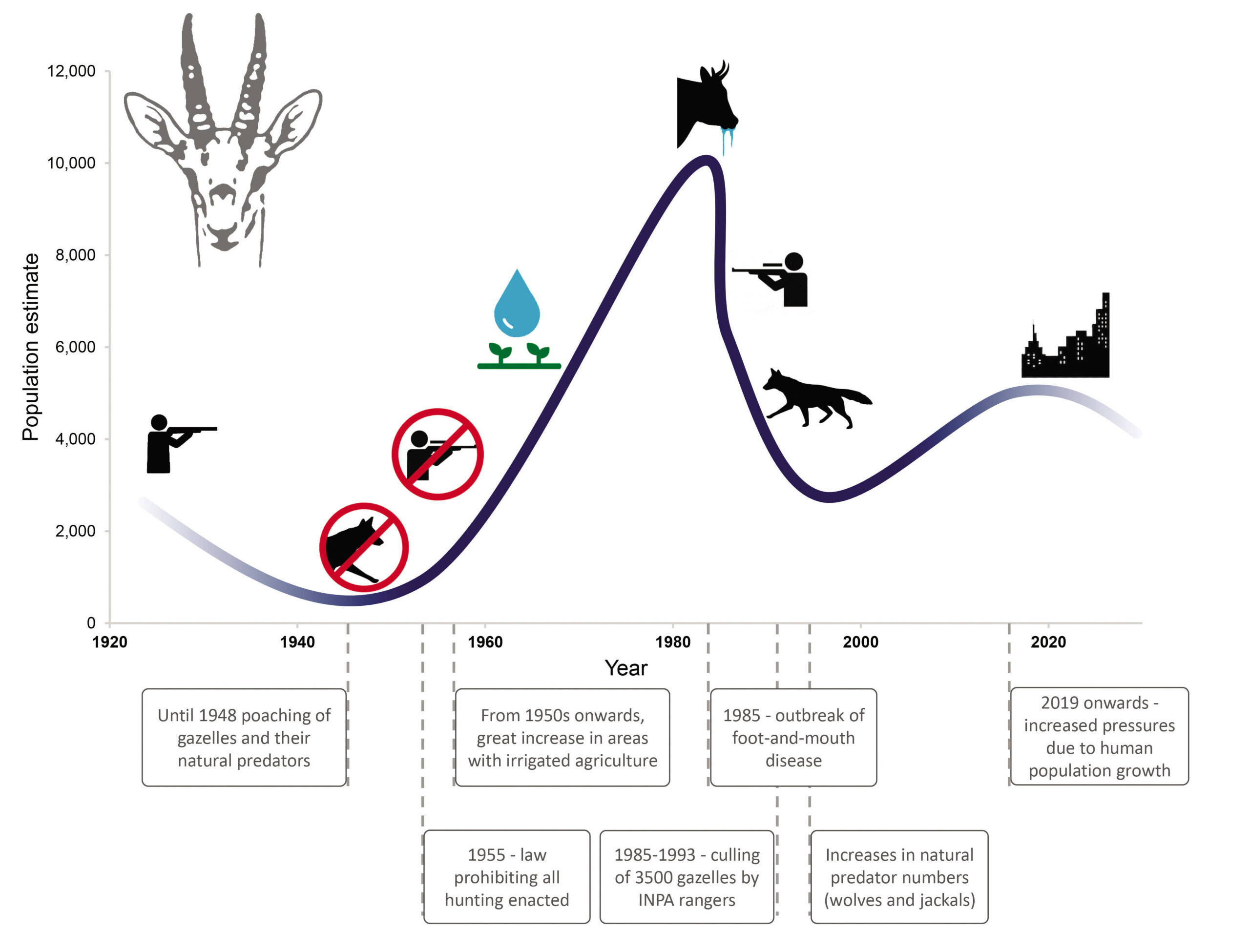 For centuries, the mountain gazelle (Gazella gazelle) was widespread throughout the Fertile Crescent – in parts of present-day Israel, Lebanon, Jordan, Syria, Turkey and Iraq. Most of its former distribution range overlaps with areas in the region that are now densely populated by people.

Archaeological remains also indicate that gazelles were the main prey hunted by people throughout the Pleistocene Era that existed until 11,700 years ago. Nevertheless, until the 19th century, the mountain gazelle survived this hunting pressure and even thrived. However, population growth between 1900 and 2016, together with the increased use of firearms and off-road vehicles for hunting, led to the extinction of gazelles from most of this area.

Traditional hunting of gazelles persisted to varying degrees up to the beginning of the 20th century. Until the end of the Ottoman Empire at the end of World War I, hunting was unregulated and widespread, leading to local extinctions or serious declines of several vertebrate species, including a massive decline in the gazelle population, they wrote in the journal article. After World War I, during the British Mandate, a Conservation of Game Animals law for the regulation of hunting was enacted but rarely enforced.

The establishment of the State of Israel in 1948 had substantial effects on wildlife following major political changes. The Protection of Wild Animals law, enacted in 1955 stipulated that all wild, terrestrial and winged vertebrates in Israel are protected, excluding a few species considered pests and some categorized as game. The human composition of the State of Israel changed considerably, and many communities with traditional hunting cultures were displaced. But in the 1950s, half of agricultural areas became irrigated, providing gazelles with nutritious vegetation and drinking water year-round, allowing gazelles to breed throughout the year and females to give birth twice per year. Their numbers increased, but in recent years, this trend was reversed.

Israel and the Palestinian Authority are currently the last strongholds of the mountain gazelle and are home to about 5,000 of the majestic animals. A new research effort led by Prof. Yoram Yom-Tov of Tel Aviv University and Dr. Uri Roll of Ben-Gurion University of the Negev in Beersheba, together with Amir Balaban, Ezra Hadad, and Gilad Weil, reviews mountain gazelle dynamics in Israel from the beginning of the 20th century and provides an outlook for the conservation of the species.

Their findings have just been published in Oryx-The International Journal of Conservation. During the last century, Israel’s human population increased steadily by 2% per year. Human population density in the region is currently about 430 persons per square kilometer and is expected to continue to rise. More broadly, Israel’s human population is expected to double in the next thirty years – which will have grave implications on many local species and ecosystems, some of which are of global importance.

This presents an array of threats to the mountain gazelle. These include: habitat change; fragmentation and isolation by roads, railways and fences, predation by an increasing population of natural predators and feral dogs, poaching and collisions with vehicles on the road. These threats often act in synergy, amplifying their effects.

In their article, they present an overview of how these factors threatened and continue to threaten the survival of this species. They also review the policy and management actions, both implemented and still required, to ensure the persistence of the mountain gazelle. In addition, they analyze connectivity of gazelle populations in the landscape, highlighting highly fragmented populations, and suggesting potential interventions.

To improve connectivity, the authors suggest construction of road over/under passes in strategic locations, translocation of gazelles when needed, and better monitoring of potential genetic bottlenecks of the at-risk population. To reduce the effects of them being attacked and eaten by predators, they suggest reinstating the control of wild dogs and improved management of environmental waste.

In addition, they urged greater efforts that be made on the legislative, enforcement and education fronts to eliminate poaching of gazelles. Efforts should be made at the national level to stop further land conversions from natural habitats to other uses. The mountain gazelle exemplifies an hoofed animal with both great vulnerability to environmental pressures and a large breeding potential. As more and more regions are converted to human-dominated landscapes, pressures on wildlife will continue to increase, and lessons from the mountain gazelle could prove valuable elsewhere.