No Pie for Palestine

Home » No Pie for Palestine 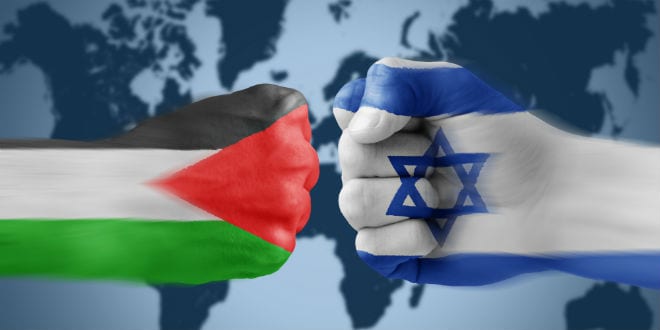 Once, I was down to the last bite of a really good blueberry pie. My wife moved in with her fork to have some and I (playfully) stabbed her in the hand with my fork. Suffice it to say, I didn’t end up with the last bite of pie, and my stabbing her and not her taking my pie is what’s remembered.

While it’s not a perfect analogy to describe the Middle East in terms of a pie, it’s a funny story and relevant metaphor. Israel shares a small hotly contested piece of land with Arabs who do not share Israel’s national or religious ideals. The pie analogy works because the Land, like a pie, is finite. After someone eats the last piece, it’s gone. Palestinian Arabs don’t seem to realize (or maybe care) that the reality is that each passing day, year, and decade of their intransigence leaves them with less pie. Soon, there will be no pie for “Palestine.”

This is a generations old problem. They want to deny Israel any of the pie, much less even sitting at the table. Despite their denial, Israel grows and thrives. While Israel recognized the terrorist PLO, established to destroy Israel, as the legitimate representative of the “Palestinian” people in the 1990s, today there are multiple Palestinian Arab terror groups that compete to represent and control the “Palestinians.” In all cases, this is less about the well being of the people they claim to represent, and more about fighting Israel.

Palestinian Arabs have been offered repeated opportunities that would have seen two states going back to 1947. And they have turned their backs on and rejected each opportunity, typically with violence.

The most recent opportunity on the table, President Trump’s Peace to Prosperity plan, offers a big piece of pie to them, with a $50 billion financial incentive to help build their own country. It’s less land than previous deals about which they may be right to be unhappy. They are still being offered not only 70 percent of Judea and Samaria, and Gaza, but a land bridge cutting across Israel between the two.

Their response has been reflexively negative, and hostile. Simply in anticipation of the possibility of Israel asserting sovereignty as early as next month in the 30 percent of the land that includes the Jewish communities, they have broken ties with Israel and the US.

Putting aside the “legitimacy” of many of their claims to the Land that’s built on historical lies, and recognizing that there at least is a demographic issue to deal with, how often will the “Palestinians” be able to play losing hand after losing hand, and still have credibility? When will the world call their bluff that they want Israel’s downfall more than their independence?

Now, as Israel considers applying sovereignty, they’re playing another losing hand. Rather than doubling down on asserting their claims or negotiating, they’re cutting ties and abrogating agreements reached, including mutual recognition of one another’s rights, and that differences should be negotiated. If they have no relations with Israel, and don’t recognize Israel’s right to exist in peace as a Jewish state, what gives them the indefinite right to a state and any sovereignty of their own? Following this trajectory, soon they will have no cards to play, other than the one that’s always up their sleeve, violence.

In anticipation of Israel’s plans to annex parts of Judea and Samaria, rather than negotiate according to the terms of the Peace to Prosperity plan and other agreements that they have signed, the Palestinian Authority suspended ties with Israel. This shoots themselves in the foot because Israel provides a myriad of support to the PA. They now say they will not accept the transfer of taxes that Israel collects on their behalf, some of which was recently advanced given the corona pandemic, as well as security coordination, shared natural and other resources, and more.

Many Israelis on the right of the political spectrum see the reality and don’t believe that our neighbors truly want peace, so feel there’s no point to negotiate to give up land or risk our security. The latest Palestinian Arab actions do nothing to persuade otherwise. Many Israelis on the left see the imperative to negotiate and reach a settlement, any settlement, that will bring the conflict to an end. The latest Palestinian actions don’t provide any confidence however that they will uphold an agreement, much less not use violence to attain it, and again afterward.

As long as there is a deal on the table and goodwill to settle differences through negotiation rather than through threats, incitement and violence, there remains an opportunity to coexist and resolve things peacefully.

Otherwise, the world will see their fraud, will move on, and not only will they be left with no pie, but no crumbs.