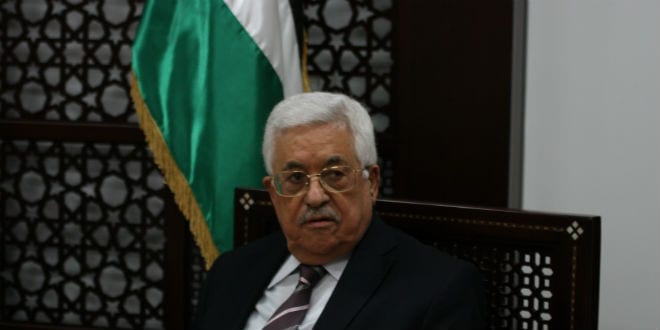 Mahmoud Abbas, head of the PLO and chairman of the Palestinian Authority, announced on May 19 that “He, the PLO, and the State of Palestine” are absolved of all agreements and understandings with Israel and the United States, including on security matters.

Abbas’s purported withdrawal from signed agreements was accompanied by his long-time allegation that it was Israel and not the Palestinians that had effectively nullified the Oslo Accords through a series of policies and decisions, including Israel’s intention to “annex” West Bank Jewish communities and the Jordan Valley.

Abbas’s latest threat illustrated the effectiveness of the P.A. leader’s media and diplomatic campaign against Israel. Most major international news media outlets and the western diplomatic community did not see the move as a material breach of the Palestinian leadership’s legal obligations under the Oslo Interim Accords. Instead, the international media community took Abbas’s statement as a “green light” to condemn Israel’s declared intention to apply Israeli law/sovereignty to parts of the West Bank in conjunction with the U.S. administration’s peace plan that proposes a Palestinian state next to Israel.

Abbas declared on May 19, “We hold the American administration fully responsible for the oppression befalling the Palestinian people, and we consider it a primary partner with the Israeli occupation government in all its aggressive and unfair decisions and measures against our people.”

Abbas had previously branded President Donald Trump “a dog and a son of a bitch” and called upon Hamas and Palestinian Islamic Jihad to help defeat the U.S. plan. This was a clarion call for violence and a breach of signed agreements. Abbas had also referred to U.S. Ambassador David Friedman as “a son of a dog.” Western governments and news media remained mostly silent on Abbas’s anti-Semitic statements against Friedman and his rhetorical incitement against a sitting U.S. president.

Abbas’s public announcement abandoning signed agreements with Israel under the Oslo Accords is neither an unprecedented nor isolated event. He has made similar statements in the past. In February 2020, Abbas announced the end of cooperation with Israel following the publication of the U.S. peace plan. In 2017, Abbas cut off cooperation with the U.S. administration, including the American consulate in Jerusalem that effectively served as an embassy to the P.A.

The recurring threats by Abbas

In 2015, during the shuttle diplomacy by then-Secretary of State John Kerry, Abbas issued a virtually identical declaration ending security cooperation and other Oslo-mandated obligations in a speech to the United Nations General Assembly. Since assuming the role of PLO and P.A. chairman in 2005, Abbas has declared his intention on numerous occasions to end security and other cooperation with Israel, to resign as P.A. leader and even dismantle the P.A.

The P.A. leader’s undiplomatic rhetoric and his recurring attacks on Israel and the United States disregarded accepted diplomatic practice. But more significantly, his statements, threats and actions reflect a broader strategy of selective compliance with agreements that Abbas and former PLO and P.A. chairman Yasser Arafat operationalized since signing the first of the Oslo Accords with Israel in September 1993. Both Palestinian leaders either complied with or violated the internationally guaranteed Oslo Accords according to personal or political expediency.

Historian Efraim Karsh documented Arafat’s immediate breach of signed agreements in the very first stage of implementation of the Oslo Accords when Arafat returned to Gaza in 1994, with Mamduh Nawfal, the mastermind of the 1974 Ma’alot atrocity that killed 27 Israeli children, “hidden in the trunk of Arafat’s car.”

Arafat set the precedent of selective compliance for Abbas, his deputy and ideological loyalist. Abbas’s recent declaration of cessation of security cooperation with Israel and other obligations constitutes a fundamental violation of Oslo, as Amb. Alan Baker, former legal adviser to Israel’s Foreign Ministry and an Oslo negotiator, has pointed out.

Paradoxically, Abbas’s May 19 declaration, that also called for the international community to unilaterally recognize the State of Palestine, also constitutes a material breach of the Oslo Interim Accords, inasmuch as the Palestinians committed themselves in the final clauses of the Accords not to alter the status of the territory pending the outcome of the permanent status negotiations. The Abbas statement follows the unilateral move that he made at the United Nations, resulting in the United Nations General Assembly recognition of “Palestine” as a non-member observer state in 2012. Abbas’s strategic actions essentially voided the Oslo agreements altogether.

In a more recent example, Abbas’s policy of official P.A. incentive payments and annuities to terrorists who were incarcerated or killed, and to their families, also represent a material breach of the Oslo agreements, as well as international treaties and resolutions prohibiting the finance of terrorism. Yet, Abbas was never held accountable for this policy until the current U.S. administration withheld some $200 million in aid with the passing of the Taylor Force Act in 2018.

Abbas’s decisions to violate signed agreements have been carried out with impunity, drawing little condemnation from foreign governments, international media, or international organizations. Western silence on Palestinian violations of Oslo since 1994 have energized, encouraged and reassured Arafat and Abbas that their selective noncompliance with signed agreements would not be a risky or costly strategy.

Arafat had established a solid precedent for internationally-accepted Palestinian selective compliance to Oslo. Since the September 1993 signing of the Oslo Exchange of Letters, Arafat had regularly and publicly violated the Oslo commitment to refrain from violence or incitement to violence.

Among many examples, two instances may suffice. Arafat famously called for “jihad” against Israel in a May 10, 1994, speech in a Johannesburg, South Africa mosque. Just one week after signing the May 4, 1994, Cairo Agreement, the PLO head declared, ″You have to come and to fight and to start a jihad to liberate Jerusalem, the historical shrine. And this is very important.″

In a 1996 Stockholm address to Arab diplomats, Arafat said, “The PLO plans to eliminate the State of Israel and establish a purely Palestinian state. We will make life unbearable for Jews by psychological warfare and population explosion; Jews won’t want to live among us Arabs.”

Paradoxically, Arafat, until his forced isolation in Ramallah in 2002 for collaboration and financing of PLO and Hamas terror, and Abbas, have enjoyed international amenability to their strategy of selective compliance and “convenient” violations of the Oslo and related signed agreements.

For its part, Israel also erred in remaining silent and even acquiescent over P.A. violations for many of the 27 years of the Oslo agreements for fear of losing Arafat’s cooperation and now Abbas’s partnership, as well as international support.

Israel has paid a high international price in its own state’s legitimacy over the past two decades for failing to expose and protest the violations of Oslo. Arafat and Abbas were given a free pass by Israel for years following breaches of signed agreements, including the current P.A. official policy of incentivizing and compensating terrorists, incitement to violence, radicalizing the Palestinian public and mobilizing international organizations and institutions against Israel including the United Nations, its International Court of Justice and the International Criminal Court.

Abbas’s most recent pronouncement serves a two-pronged purpose. First, his declaration of diplomatic warfare against Israel was meant to isolate and delegitimize it in the international arena and to distract worldwide attention from the growing schism between the P.A. and the Arab world, particularly the Gulf states led by Saudi Arabia.

Abbas’s statement was also directed domestically towards the Palestinian people as a tactical distraction in response to increasing discontent and disillusionment over his policies and decisions. Recent Palestinian polls indicate that some 60 percent of the public would like to see Abbas step down as leader. Polls have also shown that anti-Israel sentiment is on the rise on the Palestinian street, which appears to be the direct result of Abbas’ inflammatory rhetoric and actions in both the international and domestic arenas.