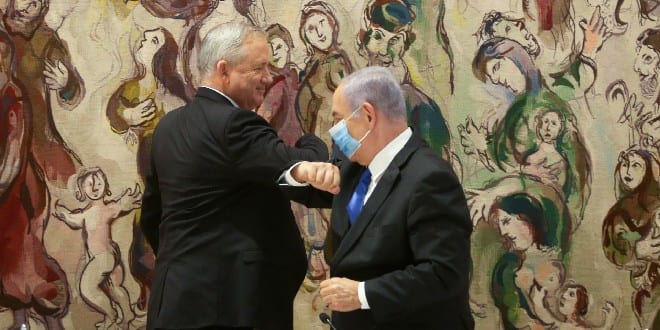 The first casualty of Prime Minister Benjamin Netanyahu’s decision to form a governing coalition with left-leaning Blue and White Party head Benny Gantz was Yamina. The five members of the right-wing national-religious party were the odd men out. With his Likud Party members braying for senior ministries, Netanyahu was unable to satisfy Yamina’s demands.

But there are advantages to being in the opposition. The coalition deal Netanyahu signed with Gantz massively constrains the freedom of coalition members to advance legislation. As a party in the opposition, Yamina lawmakers suffer no such constraints .

The media circus that accompanied the opening of Netanyahu’s criminal trial last week along with the Supreme Court’s scandalous decision to bar the Israel Defense Forces from carrying out the government’s order to destroy the home of the terrorist who murdered Dvir Sorek last summer both served to reinforce the urgent need to overhaul Israel’s legal system.

In three back-to-back elections, legal reform was Yamina’s central campaign issue. Now, as members of the opposition and led by former defense minister Naftali Bennet and former justice minister Ayelet Shaked, Yamina is uniquely positioned to significantly advance the cause.

Whereas most of the public discussion of the issue of legal reform over the past several months has centered on the issue of the Justice Ministry and which party will control it, the fact is that the identity of the justice minister is not particularly significant. The only arena that can affect the major reforms required to restore the proper functioning of Israel’s legal system is the Knesset, because legal reform requires legislative—not executive—action.

What follows is a partial inventory of a legislative package that would significantly advance the cause.

At present, the attorney general is both head of the state prosecution and the government’s legal adviser. This cannot continue. The dual role has invited and caused a profound perversion of both positions, to the detriment of good governance.

As heads of the prosecution, attorneys general have routinely opened criminal probes against ministers and prime ministers. And while prosecuting Israel’s elected leaders, the same attorneys general have repeatedly refused to defend lawful policies enacted by the very elected officials they are investigating and prosecuting before the Supreme Court. Current Attorney General Avichai Mandelblit’s polluted probe of Netanyahu and his scandalous decision to use those probes to hijack three election campaigns has made the corrupted state of affairs insufferable.

To remedy the situation, the Knesset must pass legislation dividing the current powers of the attorney general into two positions—the head of the state prosecution and the legal adviser to the government.

In 1997, the authority to appoint the attorney general in his dual role passed from the justice minister to an appointments committee chaired by a retired Supreme Court justice. The change effectively rendered the attorney general subordinate to the court, rather than the government. The amended law must restore the previous system by stipulating that the justice minister has the sole power to appoint both officials and the government has the sole authority to approve their appointments.

Mandelblit went so far as to directly reject ministers’ right to engage private counsel in cases where he refused to defend them. The amended law must stipulate that the opinions of the legal adviser to the government are nonbinding.

To restore the separation of powers, the amended law must stipulate as well that the Supreme Court may not review or overturn the law.

If we have learned anything from the polluted investigative process that preceded Netanyahu’s indictment and the opening of his trial last week, we learned that the state prosecution’s practice of investigating serving government leaders must eInd. The constant flow of illegal leaks from the police investigation—almost all prejudicial to Netanyahu—have taken a steep toll on public trust in the legal system and the police.

Mandelblit’s aggressive interference in the elections—first by announcing his intention to indict Netanyahu at the height of the April 2019 election campaign, then by holding a prejudicial pre-indictment hearing of the premier ahead of the Sept. 17 second election, and finally by announcing his indictment of Netanyahu while he was standing next to President Donald Trump in the White House weeks before the third election in March, were not merely stunning abuses of power. They were a testament to the urgent need to remove unelected, unaccountable prosecutors from politics.

Under the current system, everyone elected to office is effectively a hostage of the unchecked and increasingly out of control government prosecutors from the day they are sworn in until the day they leave office. To end this insufferable state of affairs, the Knesset must restore full immunity from criminal investigations and prosecutions for elected officials for the duration of their time in office.

The Jerusalem District Court judges presiding over Netanyahu’s trial exposed their hand Sunday by requiring the prime minister to appear at what was merely a procedural hearing that defendants in normal trials are permitted to skip. Their showboating was a clear indicator that Netanyahu is unlikely to receive a fair trial.

To prevent Netanyahu from being further railroaded and so destroying public faith in the legal system as a whole, the amended immunity law must be applied retroactively to suspend Netanyahu’s criminal trial until after he leaves office.

Mandelblit’s indictments of Netanyahu involve interpretations of the bribery and breach of trust statutes that lawmakers clearly never imagined, must less intended. The “bribe” Mandelblit accuses Netanyahu of accepting is not money, but positive media coverage. There is no precedent for treating media coverage as a bribe, not in Israel and not anywhere in the free world. Practically speaking, Mandelblit’s move serves to criminalize both the profession of politics and the profession of journalism.

Mandelblit has been able to carry out his abusive investigation and prosecution because the language of Israel’s criminal code is not sufficiently explicit to prevent this sort of prosecutorial abuse.

To remedy this state of affairs, the Knesset must amend the criminal code and make the language of statutes explicit and limited. This should be done first and foremost in relation to public corruption charges. But as anyone subjected to the tender mercies of the Justice Ministry’s Collection Authority or even to traffic courts has seen, the unrestrained powers and overly broad discretion of government prosecutors invites tyrannical behavior. A general overhaul of the criminal code is the order of the day.

Last Monday, the Yamina faction submitted a limited bill to amend the immunity law so to provide immunity from investigation and prosecution to future prime ministers—that is, not to Netanyahu. Yamina’s lawmakers presented their bill as a step towards “legal reform.” Unfortunately, the bill misses the target. This is true first and foremost because it’s just a drop in the bucket. Their bill proposes a single change to a system that is totally broken.

Yamina’s deliberate removal of Netanyahu’s trial from the purview of its bill exposes the entire effort as little more than a publicity stunt. It will not advance through the Knesset and even if it did, it is so patently unserious that neither the attorney general nor the Supreme Court will have any compunction about ignoring over overturning it in the future.

If Yamina’s lawmakers withdraw their unserious immunity bill and replace it with a serious package of legal reform bills along the lines set out here, they will keep their faith with their voters, and indeed, expand their support base significantly by truly advancing the cause they ran on—legal reform.

In a parliamentary system, the goal of all opposition parties is to bring down the government. If Yamina submits a serious legal reform package, it will take a big step towards achieving that goal. In their previous terms in office, Shaked and Bennet and their partner Betzalel Smotrich demonstrated impressive parliamentary skills.

If they use those skills now to cobble together 61 votes for their measures, they are all but guaranteed to receive Likud support and gratitude. This, in turn, will ensure their political futures and most importantly for the country, restore the powers of elected officials to enable them to carry out the will of their voters.