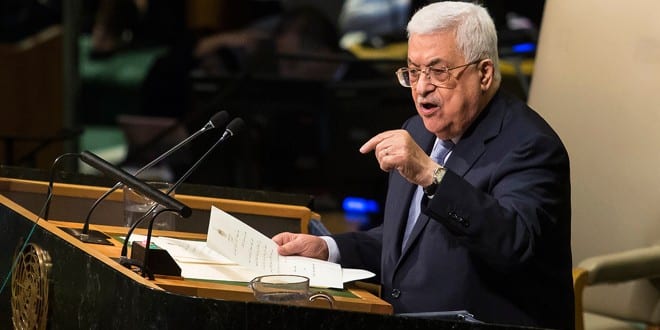 Tuesday evening, Palestinian Authority and PLO chairman Mahmoud Abbas announced that the P.A. is renouncing the peace deals it signed with Israel along with its agreements with the United States. According to several left-leaning Israeli television commentators and retired generals, his speech was an earthquake. It was a calamity of epic proportions. Most importantly, it was a reason to bury the government’s plan to apply Israeli law to the Israeli communities in Judea and Samaria and to the Jordan Valley.

But the truth is not at all what they claim. This isn’t an earthquake. It isn’t even a hiccup. It isn’t a calamity. It just a tired, recycled, empty threat.

Abbas had no problem remembering his lines Tuesday night because he’s given the same speech, word for word, a half dozen times (aside from the throwaway sentence blasting President Donald Trump’s peace plan and Israel’s sovereignty plan). The first time Abbas gave it was in September 2015 in his address to the United Nations General Assembly.

As was the case Tuesday night, so every other time Abbas gave this speech; shortly after he walked offstage Israeli leftists said the sky was falling. But then the truth started filtering in.

After the first news cycle passed, Abbas’s lackeys clarified that he didn’t mean it. There is no plan to make his declaration operative. He’s just trying to send a message—that is, a threat—to Israel and America.

The same state of affairs prevailed following Tuesday’s “I’m ditching the peace deals” speech. After the Israeli media and the leftist former generals wailed and sounded dire warnings about what will befall the country if the government doesn’t abandon all of its plans, the Palestinians made clear that this week too, he didn’t mean it. Abbas’s advisers and lackeys said it was simply his way of “warning” Israel and America. For their part, local leaders and militia chiefs shrugged their shoulders and said they heard about the speech from the Israeli media.

Set aside for a moment the fact that Abbas’s speech this week was a complete joke, and consider what would actually happen if he implemented his declaration and officially abrogated all the agreements he and his predecessor Yasser Arafat signed with Israel since 1993.

The fact is that nothing would change at all.

Since 1994, when they began governing the Palestinian areas in Judea and Samaria and Gaza by force of the agreements they signed with Israel, the Palestinians have systematically and continuously breached every single substantive commitment they made to Israel. Most notably, the Palestinians agreed to fight terror. Instead, for the past 27 years the Palestinian Authority under both Arafat and Abbas has incited, financed and directed terrorism against Israel.

In every sphere of authority Israel transferred to it, the Palestinian Authority has used its powers—military and civilian—not to govern Palestinians and advance the cause of peace, but to wage a multidimensional war against the Jewish state and its citizens. From diplomacy to planning and zoning, from sewage treatment to education and religious affairs, the P.A. has continuously breached every article and annex in the agreements it signed with Israel in order to harm the Jewish state and its citizens.

So again, if Abbas actually carries through on his tired threat and cancels the agreements, it won’t make a bit of difference to anyone. Those deals have all been long been dead in the water.

One of Abbas’s lines that always terrifies Israeli leftists is his threat to cut off security cooperation between Palestinian and Israeli security forces. The Israeli left’s Pavlovian response to that is to say that if that happens, rivers of blood will flow and anyone who doesn’t immediately give in to all of Abbas’s demands, they say, will have the blood of Israeli soldiers and civilians on their hands.

Setting aside the moral obscenity at the base their practice of blaming their political opponents for the Palestinians’ aggression, the leftists’ claim is substantively wrong on two counts. First, as former defense minister Moshe Ya’alon has said repeatedly over the years, the Palestinians don’t protect Israelis. The Israel Defense Forces protects Israelis. The Palestinians benefit far more from their security coordination with the IDF than the IDF benefits from its security coordination with them.

Second, the security coordination between Israel and Palestinians has little to do with Abbas. Under the Oslo deals, the P.A. formed more than a dozen militias, all charged with overlapping duties and authorities. Over the years Israel’s security cooperation with each of these militias has been a function of how the various forces’ local commanders on the ground view their personal interests. A commander of the preventive security force in Jenin or Qalqilya, for instance, may view his personal interests as advanced through tight cooperation with Israeli security forces and Israeli civilian leaders in the Israeli communities surrounding them.

A military intelligence commander in the south Hebron Hills, on the other hand, may prefer to cooperate with his brother-in-law or cousins in Hamas than with Israel.

In both cases, the local militia bosses make their judgments with little connection to Abbas’s position on the matter.

If the Abbas abrogates the agreements with Israel, his actions will be met with the same indifference by local commanders that they are met with today.

This is not to say that Abbas is irrelevant. He is relevant in two arenas: The first arena is the international arena. Abbas leveraged the Oslo agreements to invent a paper state called “The State of Palestine.”

In keeping with Palestine-on-paper’s continuous war against Israel, during his latest “I quit the agreements” speech, Abbas called on the nations of the world that have yet to recognize Palestine-on-paper to do so.

Another thing that won’t change if Abbas actually abrogates the agreements is the P.A.’s demand for money. If Abbas formally ends the peace deals, that doesn’t mean he won’t expect Israel to collect taxes for him and transfer him the money. He can be trusted to keep the demands for cash up no matter what happens.

This brings us to the second arena where Abbas plays an outsized role. Abbas, an 83-year-old kidney patient, sits on a goldmine worth billions of dollars. The funds that Abbas controls are comprised of his personal wealth, P.A. funding from foreign governments, and tax revenues that Israel collects and transfers to the P.A.’s bank account.

No one knows who will take control over the money after Abbas dies or otherwise quits the stage. But who that person (or persons) is will determine to a great degree how Palestinian clan leaders, mayors and local security chiefs behave going forward. If Abbas is succeeded by people aligned with Hamas or by members of Hamas, it will have a major impact on the behavior of commanders on the ground. Some will choose to join Hamas and turn their guns on Israel. Some will cling to Israel ever more tightly. Israel will fight the commanders who side with Hamas and help those who stand with it.

If a PLO apparatchik—or as Abbas hopes, one of his sons—takes over, it is likely that they will continue using money to grease the gears of power as Abbas has. If this is the case, little is likely to change in Israel’s relationships with commanders on the ground.

Although Abbas’s latest empty threat is no reason for concern, his remarks—and the left’s predictable response—should serve as a reminder that Israel needs to develop a reality-based policy for dealing with the Palestinians for the day after Abbas—who is old and sick—leaves power. The first challenge for Israel’s leaders in forging such a policy is to base it on reality.

The peace deals Israel signed with the Palestinians in the 1990s failed utterly because they never reflected reality. Those deals, like the peace process itself, were an expression of the Israeli left’s ideological aspirations. Arafat and Abbas were never interested in making the left’s dreams of appeasement-based peace come true. But they were prepared to lie to their Israeli fans in exchange for cash, power and international standing.

Israel’s post-Oslo policy towards the Palestinians needs to recognize the basic fact that deals—all deals—can succeed only if they are predicated on reality. The purpose of deals is not to transform reality, but to serve as a means for the sides to the agreement to advance their common goals.

Israel would be better off signing 15 reality-based, limited agreements with 15 local Palestinian leaders and security bosses from Hebron in the south to Jenin in the north than one big peace treaty with the PLO, which will only use it as a means to escalate its war against Israel while cultivating its ties with the Israeli left, the European Union and the Democratic Party in America.

Beyond agreements, a critical aspect of a reality-based Israeli policy towards the Palestinians is the question of funding. What Israeli interest is advanced by transferring billions of dollars in tax revenues to the P.A.? Should Israel continue to transfer the funds? Would Israel be better served by transferring the funds directly to local Palestinian leaders than continuing to transfer them to the P.A.’s bank account in Ramallah?

As Israel gets closer to the July 1 date to begin applying Israeli law to the Israeli communities in Judea and Samaria and to the Jordan Valley, threats from those who have prospered by perpetuating the peace fraud will multiply and escalate. There is no reason to listen to the prattle. Israel and its allies should maintain a steady course forward and concentrate on how to build a new framework for relations with the Palestinians built not around catering to Abbas and his lies but towards building durable ties with those on the ground who recognize the value of good relations with Israel.