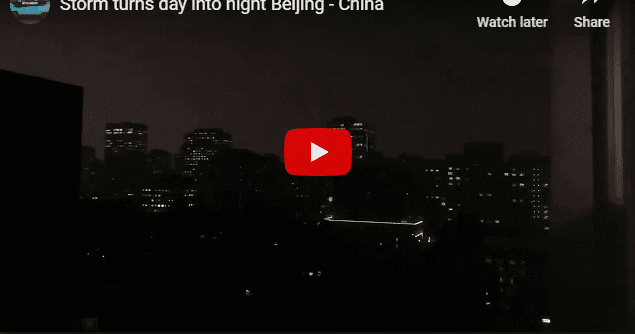 At around 3:45 Pm, the city went suddenly dark. Ten minutes later, the city was hit by a violent thunderstorm.

The deep darkness was attributed to a combination of stormy weather and Beijing’s notorious smog.

The scene was strongly reminiscent of the ninth plague that struck Egypt, showing the power of God and forcing them to release the Jews from bondage.

Then Hashem said to Moshe, “Hold out your arm toward the sky that there may be darkness upon the land of Egypt, a darkness that can be touched.” Exodus 10:21

This is not the first time the capital of China has been struck by darkness. On June 4th in 2013, air pollution generated a similar blackout on the anniversary of the forcible suppression of the student-led Tiananmen Square protests. Sending armed troops and even heavy battle tanks to suppress the anti-communist demonstrations, estimates of the death toll vary from several hundred to several thousand, with thousands more wounded. At the height of the protests, about 1 million people assembled in the Square.

Echoing these events, the Chinese Parliament began its most important political event of the year one day after the great darkness. On Friday, following a two-month delay due to the novel coronavirus outbreak. Chief on the agenda was the pandemic, which the Chinese government has, through a program of intense propaganda, convinced its people was the result of a US military plot.

In act, the pandemic originated in the city of Wuhan where China’s most prominent microbiology laboratory was researching the novel coronavirus. The pandemic led to the country’s first economic contraction after decades of continuous growth. A recent report by the Centra Intelligence Agency (CIA) claims that in January after it was clear the novel coronavirus epidemic was becoming a pandemic, the Chinese government began stockpiling medical supplies from other countries, pressuring the World Health Organization (WHO) to delay declaring a global health emergency in order to facilitate stockpiling.

The session also saw the passage of a hugely controversial national security law for Hong Kong, in what could be the biggest blow to the city’s autonomy and civil liberties since its handover to Chinese rule in 1997. Its opponents claim the law will end civil liberties in Hong Kong where, before the outbreak of the pandemic, six months of massive civil protests were held protesting the Chinese regime’s stranglehold over Hong Kong.

The darkness inside the parliament rivaled the darkness outside as the government called for a significant increase in military spending as the budget for social programs was curtailed.

It is interesting to note that some Medieval Christian travelers to China reported the Mongol belief that their nation was descended from Magog. The Mongolian Empire once included sections of Russia, China, and North Korea.  The Chinese and all the minority groups living in China are of the Mongoloid race, which stems from Noah’s son Japheth. Etymologists have conjectured that the name Mongol is derived from the name Magog.

The Bible may also contain an anachronistic reference to China.

I will pour out my anger upon Sin, the stronghold of Egypt, and I will destroy the wealth of No. I will set fire to Egypt; Sin shall writhe in anguish and No shall be torn apart; and Noph [shall face] adversaries in broad daylight Ezekiel 30:15-16

In fact, China has seen incarnations of several Biblical plagues in recent months including swarms of locusts and the bubonic plague.