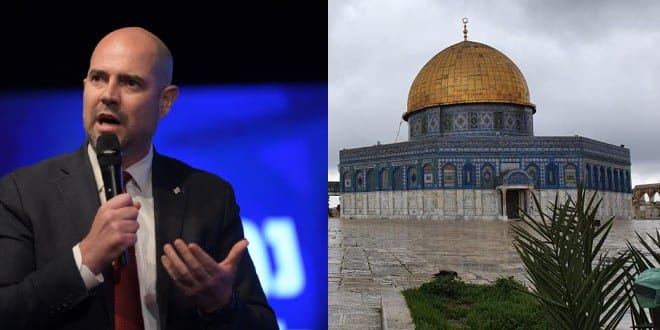 A newly appointed minister may seem at first glance to be an unlikely choice for Public Security Minister but a closer look, bolstered by some insider information in the form of old videos, shows that Amir Ohana may be the key to seeing an Israeli flag finally flying over Judaism’s holiest site: the Temple Mount.

Prime Minister Netanyahu appointed Amir Ohana, the current Minister of Justice, to serve as the Public Security Minister in the newly formed government. The appointment will put Ohana in charge of  law enforcement, which includes the police, prison service and Fire and Rescue Authority. The appointment is not surprising as Ohana is a lawyer as well as a former official of the Shin Bet, the Israel Security Agency better known by the acronym Shabak. Ohana is characterized as a staunch loyalist to the Prime Minister.

Ohana’s appointment has been widely decried by the left wing due to his decidedly right wing views. He is a supporter of loosening the policy on carrying firearms in Israel in order to allow more armed people on streets for prevention and fast reaction to terror attacks. Ironically perhaps, Ohana is the first minister of the Knesset to be openly gay though he puts party policies above his personal life. Ohana and his partner have a son and a daughter together but when opposition members of Knesset in February 2016 proposed several pro-gay bills, , Ohana left the session without voting. He later explained that he could not vote against these bills but neither did he want to violate the party line.

In a powerful act that symbolized his intentions, Ohana ascended to the Temple Mount two years ago accompanied by Temple Mount activist and former Likud MK Rabbi Yehudah Glick.

“Whoever relinquishes their symbols, and this is something our enemies understand quite well, will also relinquish control, relinquish sovereignty, and relinquish his presence in the land. Therefore it is of the greatest importance of this place, even for me as a person who is not religious, to come and to show our presence, that a Jewish person must always be on this mountain, whether it is for national or religious reasons. We cannot permit ourselves to relinquish our symbols, and of course not the Temple Mount which is the crown.”

Rabbi Glick added, “We are closer than ever to making it so.”

Ohana’s reference to the Israeli flag flying over the Temple Mount is a powerful statement of intent that is shared by many other Jews and Israeli politicians. When IDF troops conquered the Temple Mount in the 1967 Six-Day War, they climbed to the top of the Dome of the Rock to perch a flag and emphasize the realization of the 2,000-year dream of the entire nation. Defene Minister Moshe Dayan observed this through binoculars and ordered the flag immediately removed.

It is currently forbidden for non-Muslims to have or display religious items on the Temple Mount and it is also forbidden to display an Israeli flag in any form. People who have done so, even inadvertently, have been attacked by the Arabs at the ite and detained by Israeli police. Deputy Foreign Minister Tzipi Hotovely (Likud) was heavily criticized by Arabs, the Isreali left-wing, and even her boss, Prime Minister Netanyahu, when, in 2015, she expressed this dream.

“My dream is to see the Israeli flag flying over the Temple Mount,” said Hotovely during a program on the Knesset’s TV channel. “It’s the holiest place for the Jewish people.” In addition, Hotovely reiterated her previously stated position that Jews should be allowed to ascend and pray on the Temple Mount.

Rabbi Glick, remembers his visit to the Temple Mount with Ohana fondly and expressed hope that the experience would help guide the newly appointed minister.

“I’ve visited the Temple Mount several times with him,” Rabbi Glick told Breaking Israel News. “The Temple Mount is clearly important to him on many levels. It is close to his heart and I am sure he will do whatever he can to help the Jews improve our position. But the Temple Mount is not in the hands of just one person and the entire world has its eyes on the site.”

“Gilad Erdan, the former Public Security Minister did quite a bit to improve our situation but I am sure he would have liked to do even more.”

“I will certainly try to give Amir my opinion and strengthen him in this endeavor.”

Jerusalem and the Temple Mount are always close to his heart. Towards this end, Rabbi Glick established the Shalom Jerusalem Foundation.

Avraham Bloch , a Temple Mount activist, was a spokesman for Rabbi Glick and accompanied Ohana at that time.

“For some reason that wasn’t so clear, it was important to Rabbi Glick that Amir Ohana go to the Temple Mount, as a public official but no less important, Rabbi Glick wanted Ohana to go simply as a Jew,” Bloch told Breaking Israel News.

“Ohana has the ability to enat immense change at the Temple Mount. Everyone who cares about the Temple Mount is at this moment praying for Ohana to appoint Yoram HaLevy as the Chief of Police. With a strong Jew like Halevy at his side, these changes will happen.”

Bloch is probably correct in his assessment. Halevy, a 40-year veteran of the police, served in most elite units of the Israel Police including the Yamam (Special Police Unit), a force similar to American SWAT teams , and the Border Guard.

When Erdan was made Internal Security Minister in 2015, he appointed Halevi to guard over Jerusalem, which was no easy task. Under Erdan, Halevi abandoned the policy of routinely responded to Muslim violence by closing the site to Jews. Halevi refused to give in to the violence and took it upon himself as a personal mission to ensure the right of the Jews to ascend to the Temple Mount. The Moribitat, Arab Women hired by the Waqf (Muslim Authority) to harass Jews, were removed and not permitted to return.

This difference helped to significantly boost the number of Jews visiting the Temple Mount. In 2009, 5,658 Jews ascended to the Temple Mount and had doubled by 2015. Just two years later, a total of 25,000 Jews visited the site.