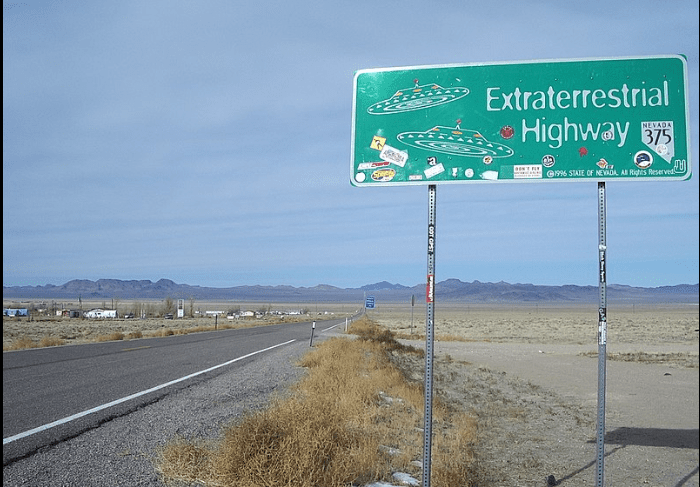 A 6.5 magnitude earthquake, Nevada’s largest in 66 years, was reportedly felt on Friday morning across three states, from southern Utah to central California. Aftershocks continued to shake the region with six in the next hour topping 4.5 on the Richter Scale. No injuries were reported but the main highway between Las Vegas and Reno was damaged and closed as a result of the quake. This is the third 3.0 magnitude earthquake in the last 10 days for the region, according to the LA Times.

TRAFFIC ADVISORY: Earthquake damage at US-95 and Esmeralda County MM 89 has closed the highway between SR-360 and US-6 (Coaldale Junction). Use an alternate route and expect delays while @nevadadot makes repairs. pic.twitter.com/QJ0v6FW0Ae

Included in the affected region was the infamous Area 51, a super-secret military site that many believe is where the military hides extraterrestrials from the prying eyes of the public. But what many don’t realize is that the epicenter of the unusual seismic shakeup was precisely underneath Area 51’s sister installation that is also super-secret and the focus of UFO conspiracies.

With its epicenter near Route 95 about 36 miles from Tonopah, the earthquake struck at roughly 4:03 a.m. at a depth of three miles. Tonopah is the home of a test range that is a restricted military installation located about 70 miles northwest of the infamous Area 51. The Tonopah Installation is also the focus of UFO conspiracy theories as it has been the testing site of experimental and classified aircraft. It is currently used for nuclear weapons stockpile reliability testing, research and development of fusing and firing systems, and testing nuclear weapon delivery systems

The reputation of the two restricted military installations is so firmly entrenched in local lore that the section of Route 375 connecting Tonopah to Rachel, the town closest to Area 51, is known as the Extraterrestrial Highway and is even touted as such by the Nevada Tourism Council.

The connection between the reputations of the secretive installations and the earth-moving experience was not lost on the public, as many commented on social media.

When you see a major #earthquake happened around Area 51 overnight pic.twitter.com/A9nAGmdD7K

The Nevada Test and Training Range in Nevada, also known as Groom Lake, has been home of the air force testing and training center since 1933. The base is huge, covering over 308,000 acres with at least 22 runways. The site was chosen for its remote location and the large expanses of perfectly flat land allowing for the construction of long runways, many of them unpaved. Adjacent to Yucca Salt Flats where the United States Department of Energy carried out over 700 nuclear tests, Area 51 is a six-mile by ten-mile section of the base in a remote and highly secretive section of the base. The current primary purpose of Area 51 is publicly unknown. A Freedom of Information Act (FOIA) request filed in 2005 led to the CIA publicly acknowledging the existence of the base for the first time in 2013.

Area 51 has been used for several secretive projects including the testing of spy planes like the Lockheed U-2 and A-12, both developed under the auspices of the Central Intelligence Agency (CIA). During the Cold War, Area 51 was used to evaluate captured Soviet air-assets.

The presence of these extraordinary aircraft has been credited with the plethora of UFO sightings claimed in the area.

The government has provided minimal information regarding Area 51. The surrounding area is permanently off-limits to both civilian and normal military air traffic. Security clearances are checked regularly; cameras and weaponry are not allowed.  The airspace for 25 miles around the base is restricted. Even military pilots training in the surrounding area risk disciplinary action if they stray into the exclusionary “box” surrounding Area 51. Aviation maps do not show any topographic details of Area 51. Sections of the base are reported to be subterranean.

The perimeter of the base is marked out by orange posts and patrolled by civilian guards in white pickup trucks and camouflage fatigues. Signage around the base perimeter advises that deadly force is authorized against trespassers. Surveillance is supplemented by cameras and buried motion sensors.

The secrecy surrounding Area 51 goes far beyond these proactive measures. In 1994, a group of civilian contractors and their widows brought a lawsuit claiming they had been exposed to hazardous materials that were burned in an open trench at the base. The case was dismissed for lack of evidence after the government refused to release details of the materials, claiming it would harm national security.  This was reinforced by a presidential order signed by Bill Clinton.

The shakeup at the UFO-linked installations comes in the wake of shocking admissions by the US military that three videos of strange “unexplained aerial phenomenon” taken by military pilots are authentic.

BIBLICAL CONNECTION: ARE ALIENS DESCRIBED IN THE BIBLE AS NEPHILIM?

Some Biblical scholars have suggested that the Bible describes what many would call aliens or extraterrestrials. The sixth chapter of Genesis describes interactions between strange creatures called Nephilim (literally ‘the fallen’) and men.

It was then, and later too, that the Nephilim appeared on earth—when the divine beings cohabited with the daughters of men, who bore them offspring. They were the heroes of old, the men of renown. Genesis 6:4

The Nephilim are mentioned again in the Book of Numbers as some of the huge residents of Israel present after the Exodus.

We saw the Nephilim there—the Anakites are part of the Nephilim—and we looked like grasshoppers to ourselves, and so we must have looked to them. Numbers 13:33

The Talmud (Sanhedrin 97a) describes how the Nephilim will return as a part of the Messianic process. In the Talmud’s discussion, Rabbi Yitzchak asks Rabbi Nachman, “Do you know when Bar Naphli (the sons of the fallen) will come?” Rav Yitzchak asks, Rav Nachman replies, “It is Messiah”.

Rav Nachman bases his answer on a verse from Amos which connects ‘nophelet’ (the fallen) with the return of the House of David.

In that day, I will set up again the fallen booth of David: I will mend its breaches and set up its ruins anew. I will build it firm as in the days of old, Amos 9:11

It is interesting to note that in gematria (Hebrew numerology), the words בר נפלי (bar naphli, the son of the fallen) equal 372, the same as בן ישי (ben Yishai, the son of Jesse), connecting the return of the Davidic dynasty with the appearance of the bar naphli.

EXPERT: THEY ARE HIDING SOMETHING HUGE

Yuval Ovadia, an expert on Nibiru and other astronomical matters believes that Area 51 and the installation in Tonopah are hiding secrets,

“It is clear that the US government is hiding something in Area 51,” Ovadia told Breaking Israel News. “This is something they don’t even attempt to deny. It may be aliens. But it is not clear that aliens are what the Bible was referring to when it described Nephilim. It would be intellectually dishonest to suggest that there is only one form of alien. If there are one species of alien, there are undoubtedly countless forms. Similarly, there are many beings that are not human that are described in the Jewish sources. Anakim (giants) are one such form that the verse in Numbers connects to the nephillim. It could also be that if there are aliens in Area 51, they could be shedim (demons). But in all the cases, our forefathers knew how to cope with them and we can as well.”

Ovadiah noted that even though scientists and the secular government has difficulty coping with the existence of alien life forms, it poses no threat to a Biblically-based perception of the universe.

“Jewish sources do not deny that there may be life on other planets. It is left as a possibility,” Ovadia said. “But Jewish sources do not relate to anything that does not have any practical or philosophical implications that we need to relate to. If and when aliens become relevant to our service of God, it will become clear that they are here. Just as the Nephilim were obviously present to the people before the Flood.”