Grave of Recently Fallen IDF Hero Desecrated, Note reads, “Your Son Has 72 Hours to be Resurrected” 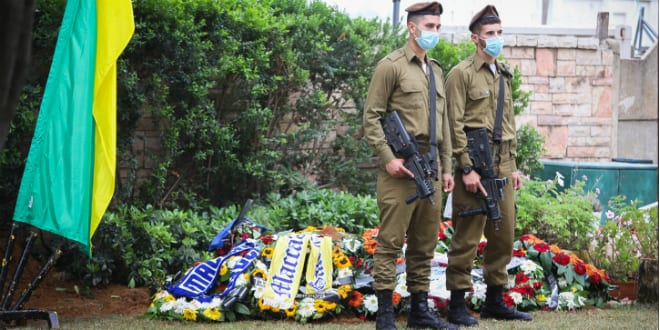 Hundreds of mourners, including Defense Minister Naftali Bennett and IDF senior officials, attended the funeral of First Sgt. Amit Ben Yigal, a 21-year-old soldier in the Golani Brigade, after he was killed on the eve of Israel Independence Day last Tuesday when a Palestinian threw a rock at his head during the operation in Yabed, near Jenin. Israel Hayom reported that just a few days later, a supervisor from the Beer Yaakov local council passed by the gravesite where she observed a strong stench. Next to the freshly dug grave were sandbags and the grave was completely open. To her horror, the upper portion of the coffin had been pried open. She also found a note placed on the coffin that read, “Your son has 72 hours to be resurrected.” The supervisor immediately reported her discovery to the police, who informed the family.

Representatives of the military rabbinate arrived at the scene to ensure that the honor of the fallen had not been desecrated.
IDF officials released a statement saying that the incident did not seem to have a nationalist motive.
“In light of the incident, we have decided that the grave will be sealed and until then, Golani soldiers will guard the area,” the IDF Spokesperson’s Unit said. “Any attack on the dignity of fallen soldiers must be condemned. The IDF and the police are working to investigate the incident,” the army said.
Head of the Beer Yaakov local council, Nissim Gozlan, lamented the horrific act, noting that a decision was made on the spot to fill the grave with cement to prevent a repeat incident

Ben Yigal was part of a reconnaissance unit of the Golani Brigade that was conducting arrests of four suspected terrorists. At around 4.30 a.m., after completing the arrests, troops began to leave the village when a group of ten locals began throwing stones towards the troops who were making their way out of the village by foot. It is believed that the suspect took the opportunity to drop the rock on Ben Yigal’s face as he was looking up to identify who was throwing the stones. While two soldiers opened fire towards the roof, they were unable to identify who threw the deadly rock. Ben Yigal was injuring critically and soon after, died from his wounds. Ben Yigal was killed one month before the end of his mandatory service.

Ben Yigal’s father told Army Radio that his only son requested to join a combat unit after visiting the death camps in Poland.