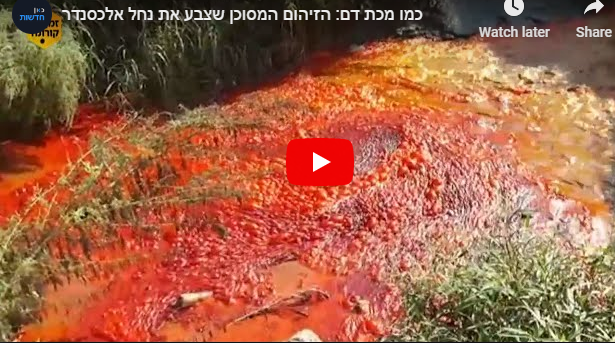 Every once in a while, a story about a river turning red from algae or from a rare sediment is reported. It’s a  phenomenon reminiscent of the first plague of blood in Egypt. But in Israel, the land of the Bible, a river has recently turned red from actual blood.

The ‘Alexander’ Stream in central Israel has turned red from blood and it’s worrying locals reports Kann News. The stream, whose sourced in the Samarian city of Shechem (Nablus) flows to the Sharon region and  then into the Mediterranean Sea.

According to the report, Arabs in the PA controlled areas of Tulkarem and Shechem in Samaria, dump blood as well other waste from their slaughter houses into the Shechem Stream which then flows into the Alexander river in the Hefer Valley of central Israel. It eventually deposits into the Mediterranean Sea.

The report notes that with the animal blood comes many excess body parts of the animals that are now polluting one of Israel’s few freshwater streams. “It looks like the plague of blood in Egypt” a local photographer named Amberto says.

And all the water in the Nile was turned into blood (Exodus 7:20)

Other locals complain that the smell of the bloody river is “rancid” as the plague was described in the Bible.

The Nile stank so that the Egyptians could not drink water from the Nile; and there was blood throughout the land of Egypt. (Exodus 7:21)

The Alexander Stream is 32 kilometers (20 miles) long. Its terminus lies between the coastal towns of Bet Yanai and Machmoret.

The army’s Civilian Authority is the government body responsible for the environmental safety in Judea and Samaria. But when asked about enforcement, they claimed that “due to the corona related restrictions, their enforcement capabilities have been slashed” explains Alon Hyman, Hefer Valley councilman.

The Hefer Valley Regional Council realized a long time ago that they can’t trust the army to enforce environmental protection laws. So they erected a purification plant in the stream to neutralize the pollution and purify the water. But the purifier has a capacity of only 7,000 cubic yards a day that is designed to filter out solid waste only. And due to the heavy rains, over 20,000 cubic yards of water are now flowing through on a daily basis.

Back in 2015, the council turned to the Supreme Court for help. And although the state agreed to fund a new purification plant at a cost of 300 Million shekel, there is no purification plant five years later. The council accuses the Environmental Protection Ministry of foot dragging.