Rabbis Agree: This Year’s Unprecedented Jewish Holiday of Bonfires Will “Burn Away” Coronavirus 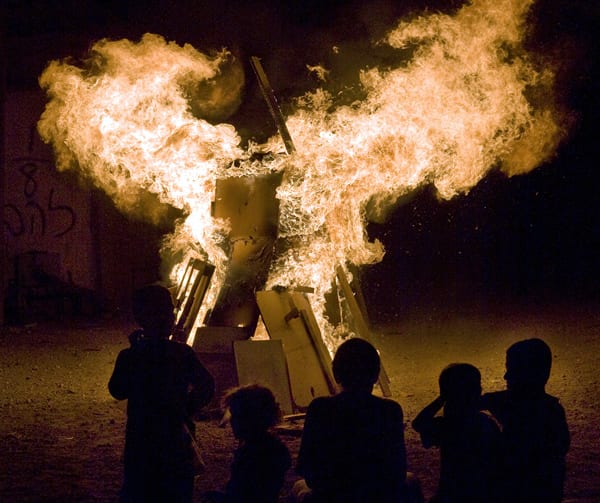 Normally a holiday of massive public gatherings and huge bonfires, the holiday of Lag Ba’Omer on Monday night will be celebrated in corona style, with families isolated inside their homes and bonfires, even modest backyard cookouts, entirely proscribed. But it is precisely the unique aspect of this year’s incarnation that some rabbis see as indicating the beginnings of redemption.

On Monday night, Jews around the world will be celebrating the holiday of Lag Ba’Omer, the 33rd day of counting the seven complete weeks between Passover when a barley wave offering was presented in the Temple, and culminating in the holiday of Shavuot when an offering of two loaves of wheat bread was brought in the Temple.  Classified as a minor holiday, acts normally forbidden on the Sabbath and holidays are permitted. The name of the holiday is derived from its position in the counting of the Omer since ‘Lag’ is spelled by the two Hebrew letters lamed and gimel,  which in gematria (Hebrew numerology) equal 33.

Jews are commanded to orally count the days in this period which is generally a period of lessened joy when weddings and other celebrations are forbidden. Ironically, it is a celebration commemorating the death of Rabbi Shimon Bar Yochai, a Jewish sage from the second century, known by the acronym Rashbi and who, according to tradition, wrote the Zohar, the basis of Kabbalah (Jewish mysticism). Normally, the passing of tzaddikim (holy men) is a source of sadness but, before passing away, the Rashbi instructed his students to remember his passing as a day of joy.

Many Jews celebrate the day with bonfires and barbecues. Mount Meron near Tzfat (Safed) is the focus of a mass pilgrimage with up to 250,000 people spending the night, praying, and celebrating at the gravesite of the Rabbi Shimon Bar Yochai.

According to the Zohar, Rabbi bar Yochai revealed the deepest secrets of Kabbalah on the day of his death, making Lag Ba’Omer into a celebration of light coming into the world. His grave is located near the city of Safed, which is historically a capital for Kabbalistic studies.

The day is also associated with the end of a mourning period, in which 24,000 students of the 2nd-century Mishnaic sage Rabbi Akiva are believed to have died fighting the Romans during the bar Kochba rebellion (132-136 C.E.). After the tragic death of his students, only five remained—one of whom was bar Yochai.

There is another view that the students died from a plague brought about by disrespecting one another, in violation of Rabbi Akiva’s principle teaching of “loving each other like oneself.” The death of the students is believed to have ceased on Lag B’Omer.

Rabbi Yitzchak Batzri, a well-known kabbalist from Jerusalem, noted that it is precisely this aspect of the holiday, the cessation of the plague, that is particularly relevant today.

“The reason behind the corona is that there has been a great deal of anger in the world,” Rabbi Batzri said, noting the similarity between the Hebrew term חרון אף (charon af, anger) and the name of the disease. “This anger is between men and also from heaven towards the world.”

The rabbi cited a tradition that claims every Hebrew year that ends in the letter פ, numerically equal to 80, is a year of pronounced anger.

“The holiday of Lag BaOmer this year is characterized as ending a particularly bountiful year of rain with even more rain being granted after Passover. Rain is hamtakat hadinim (sweetening of judgments).”

The rabbi noted that 100 years ago, the Spanish Flu Pandemic which broke out in 1918 and killed between 17-50 million people worldwide, ended suddenly at this time of year precisely 100 years ago, in the Hebrew year 5680.

“When tsaddikim (holy men) leave the world, they are able to plead our case in heaven and turn away harsh judgments. This is surely what Rabbi Shimon Bar Yochai is doing now, on the anniversary of his leaving the world.”

THE HOLIDAY OF FIRE AND WATER

Rabbi Eyal Riess, Director of the Tzfat Kabbalah Center, noted that the special incarnation of the holiday this year had auspicious implications.

“The main way we normally celebrate the holiday today is a major celebration marked with huge fires and huge gatherings,” Rabbi Riess said. “This is the day Rabbi Shimon Bar Yochai completed his revelation of the inner aspects of the Torah. This was so powerful that the celebration, the fire, burned for 2,000 years. The fire of the day was powerful enough to stop the plague in the days of Rabbi Akiva and is certainly strong enough to stop the plague today.”

“Normally this power is represented by fire which is external, burning everything and making it smaller. When people come together in large groups, there is contact, friction, heat. This year we, have so much water. Water can be internalized and it is, by nature expansive, flowing, and making things grow.”

“Both fire and water are essential aspects of healing. The world has been experiencing unprecedented expansion and connection. In an equally unprecedented manner, this pandemic gave us an opportunity to contract, to disconnect, to internalize.”

The Tzfat Kabbalah Center overlooks the shrine to Rabbi Shimon Bar Yochai and will be live streaming lectures and their lessons and socially distanced celebrations from their Facebook page.