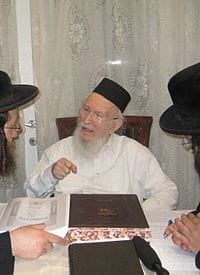 In a recent interview, Rabbi Daniel Asor warned that “the United States and China will go to war against each other.” He explains this war was predicted by the secret tzaddik (saint) Rabbi Yehuda Lefkovitch. Rabbi Lefkovitch predicted that the third World War will start between China and America over 20 years ago before the tensions were at the level that they are today. According to Rabbi Lefkovitch, this war will be the Biblical war of Gog and Magog.

“Russia will join China in the war” Rabbi Asor added. At the same time, he points to Rabbi Levi Sa’adia Nachamani who predicted 20 years ago that Iran will wage a war against Israel and will receive military assistance from North Korea.

Rabbi Asor warns that “there will be a lot of incitement blaming Israel for all of the world’s problems.” The reason is because the Arab league will also wage a propaganda war against Israel” he explains and at a certain point they’ll gather the world against Israel as written in Zechariah.

when all the nations of the earth gather against her. In that day, I will make Yerushalayim a stone for all the peoples to lift; all who lift it shall injure themselves. (Zechariah 12:3)

Once the war between America and China is waged, martial law will be enforced which will shut down the highways, sea ports and air travel throughout the USA he explains. “This is why it’s so important for Jewish Americans to leave and come to Israel” he stressed.

Rabbi Asor, the head rabbi of the Yanar Institute in Jerusalem explains that this war will pave the path for the inevitable takeover of the New World Order that is headquartered in the Vatican. He also claims that “in the Vatican, they worship Lucifer.”

Rabbi Asor also says that the Vatican believes that the son of Lucifer will come to redeem humanity. He adds that although Israel’s main battle will be with the Muslims and that Moshicah (Messiah) Ben Yosef will handle it. “But the ultimate war will be against the New World Order which is headquartered in the Vatican. That will be handled by Moshiach (Messiah) Ben David” he explains.

According to Rabbi Asor, the New World Order will implement a divide and conquer strategy whereby they cause the Christians and Muslims to fight against each other over the land of Israel. Each side will want the holy land for themselves. At that point, the Cabal will blame the two religions for crimes against humanity. But ultimately, “they will blame Judaism because it’s the religion that both Christianity and Islam branched off from.”

At this point, according to the rabbi, the New World Order will try to conquer Israel and make Jerusalem its capital. “They will control the world from Jerusalem for nine months. They will duplicate the Vatican on Mount Zion. This way they will be able to control Christianity as they will occupy the room of the last supper as well as King David’s Tomb” he warns.

However Rabbi Asor also delivers a comforting message telling everyone not to fear as this is all part of God’s plan and that the safest place to be at this time is in Israel even though it will be “the eye of the storm.”