Stoking the Flames of Anti-Semitism in New York

Home » Stoking the Flames of Anti-Semitism in New York 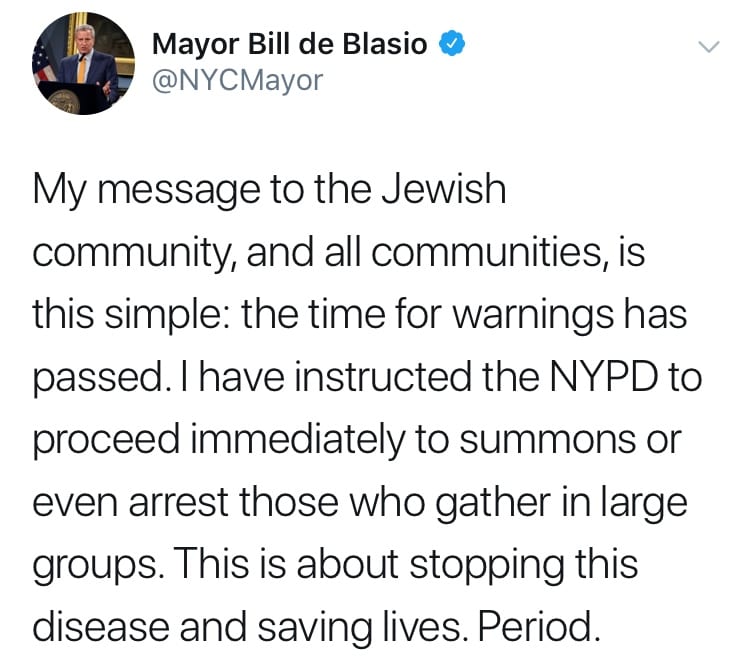 I’m sure that there have been no shortage of instances of “leaders” of cities throughout the world with large Jewish populations lashing out at their local Jewish community. Many of these were part and parcel of, warnings, if not triggers for, violent pogroms.  Nevertheless, its shocking to see the mayor of New York City, Bill de Blasio, the mayor of the city with the largest number of Jews, do so.

De Blasio’s recent tweet, calling out “the Jewish community” because of a large funeral gathering in largely ultra-Orthodox Williamsburg, is a repugnant anti-Semitic act that must be called out and never accepted. For a mayor who views himself as “progressive,” by intoning such a threat in broad strokes, he’s gone down the path that would make regressive anti-Semites proud.  Is De Blasio an anti-Semite? I don’t know. But his behavior is, without a doubt.

Surely, if he were to have replaced “Jewish” with any other religious or ethnic group in his tweet, the storm that he would have created would have ended his tenure.

New York City is home to about a million Jews, a diverse community of all backgrounds religiously and politically.  Did a million Jews violate his social distancing standards? Half of them?  25%? Even 10%? Is there any way in which such a threat on a community living in fear of assault in their communities, on the NY subway or public streets should be called out like this in its entirety? Will Jewish New Yorkers now feel extra threats personally, and at Jewish institutions, for which the mayor has done a poor job providing protecting.

There must have been a million other ways that Mayor de Blasio, as a purported leader, could have addressed this.  Did he have any right to take to twitter and castigate the entire Jewish community? Rather than doing so, should he have visited Williamsburg and held urgent meetings with Jewish leaders there, or anywhere else, in which he felt people were violating policies of social distancing and safety?  If he was too busy, he could have just made several phone calls. He could have plastered Jewish communities with notices to avoid large gatherings, even in Yiddish.

When De Blasio made his intemperate tweet, did he know that there was coordination between the community in Williamsburg and the NYC police to enable the funeral procession and keep it within safety and social distancing limitations? Should that have factored into his making such a brash public statement, blaming any element of the Jewish community much less all of it? Were the police at fault, albeit in a good way to accommodate the mourning surrounding the death of a prominent rabbi? Were the police barriers placed in an inefficient way? Should this have been a learning experience rather than a lightning rod for De Blasio’s vitriol?

If de Blasio felt the entire Jewish community was at fault, he could have made many more calls, sent our emails, or hosted a Zoom call, inviting all Jewish leaders to be part of the solution rather than being the object of his invective. Instead, the mayor employed a vulgar way to blame all New York’s Jews. Of course, like the Corona virus, the anti-Semitism that he unleashed does not stay local in New York City, but expands at epidemic rates to other Jewish communities in the New York area and beyond.  It’s as if he’s opened up jars of the anti-Semitism virus and infected millions.

It’s one thing when Jews argue, debate, and even point fingers internally at other members of the Jewish community.  That’s especially the case now, when some perceive that others are engaged in a chilul hashem, a desecration of God’s name.  That’s valid.  The mayor could have employed the help of other Jewish communal leaders. Rather, the mayor “elevated” himself to Czar, unleashing an anti-Semitic threat.

It’s another thing for a gentile mayor of a city in which there has been a marked uptick in anti-Semitism to do so. As a leader, De Blasio failed while earning the “respect” of anti-Semites worldwide.

Forget yelling fire in a crowded theater, De Blasio lit the match and poured gallons of flammable material on the flames, and then went to sleep.  When he woke up he said he had no regrets, and apologized “IF” anyone was offended. Mr. Mayor, that’s not leadership. That’s the lame way of taking the low road to appear to be sincere but really not have the humility to acknowledge you did something horrifically wrong. Of course you did nothing wrong. Some of your best friends are Jews, right?

It’s astounding that the mayor’s tweet still stands for all to see. Astounding and repugnant. That’s not leadership, that’s cowardice. Not that he can put the genie back in the bottle.  He’s unleashed another cause for anti-Semites worldwide to blame the Jews. Should he have consulted someone for dipping his toes in the deep end by tagging on to the infamous blood libel against Jews for infecting people with disease?

The mayor had so much to say about the funeral in Williamsburg that he needed three tweets back to back.  Here’s a thought Mr. Mayor, rather than wasting characters on blaming “the Jewish community” (20), next time just blame “the Jews.” (8)