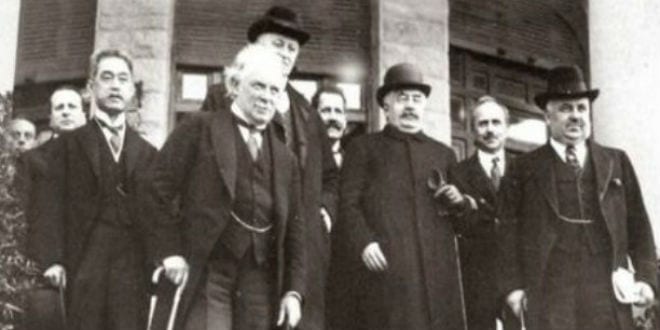 In the wake of World War I and the defeat of the Ottoman and German forces, leaders of the Allied Powers set out to reorganize Europe, and particularly the wide reach of the defeated Ottoman Empire.  As part of the effort to do so, a conference took place in London in the winter of 1920, followed by the San Remo Conference which convened 100 years ago this week. San Remo was significant in many ways, but it’s perhaps best well known for the partitioning of the Ottoman controlled Middle East. It established an irreversible precedent and support for the establishment of a Jewish state in Israel.  Given how dramatic the outcome of San Remo was, its surprising that this is among the least known, recognized, and celebrated milestones as a cornerstone of Israel’s establishment.

The participating leaders represented Britain, France, Italy, and Japan convened and concluded the San Remo Resolution, established “mandates” for three former Ottoman territories, and was ratified by the League of Nations. These included “Palestine,” “Syria,” and “Mesopotamia.” This followed the 1915-1916 McMahon–Hussein correspondence, and the secret 1916 Sykes–Picot Agreement, which albeit contradictory, established precedent for independent Arab states under leadership that the French and British essentially handpicked based on alliances and commitments they had made, and their respective interests.  McMahon-Hussein committed to Arab independence in exchange for support against the Ottomans, and Sykes-Picot divided up the Ottoman Empire even before the end of, and Ottoman loss in, WWI.

Essentially, San Remo divided up the remnants of the defeated Ottoman Empire which controlled much of the Middle East for some 400 years.  San Remo provided exclusive legal and political rights in “Palestine” to the Jews, and set aside similar rights for Arabs in the rest of the Arab world.  The “mandates” for Syria, Mesopotamia, and Palestine were established under French and British control. They were empowered to carry out the mandates until the respective territories could “stand alone.” The British mandate for Palestine included all of Israel and modern Jordan, and Mesopotamia, today’s Iraq. France gained control of Syria, including modern Lebanon.

The San Remo Resolution was adopted on April 25, 1920 and incorporated the historic 1917 Balfour Declaration. Through the Balfour Declaration, the British government committed to “the establishment of a national home for the Jewish people in Palestine.” This became a central foundation upon which the British Mandate for Palestine was established.  Under Balfour, a world power went on record as prioritizing the establishment of a Jewish state.  By incorporating Balfour into San Remo, which was adopted by the League of Nations and signed by 51 countries, there was now world recognition, affirmation, and commitment to that.

While many interpreted that the commitment under Balfour to establish a Jewish state in Palestine did not include eastern Palestine, today’s Jordan, if did affirm that Britain would be “responsible for putting into effect the declaration originally made on the 8th November, 1917, by the British Government, and adopted by the other Allied Powers, in favour of the establishment in Palestine of a national home for the Jewish people, it being clearly understood that nothing shall be done which may prejudice the civil and religious rights of existing non-Jewish communities in Palestine, or the rights and political status enjoyed by Jews in any other country.”

In short, San Remo affirmed Jewish rights to the Land of Israel, and established the legal foundation and borders of Israel under international law. It was so significant that British Lord Curzon is said to have called it Israel’s Magna Carta.

Because of the significance of San Remo, outside observers included the United States, and representatives of the Jewish leadership of Israel at the time including Chaim Weizmann, who would become Israel’s first president nearly two decades later. That the Conference took place immediately following Passover when the Jewish people celebrate their liberation and exodus from slavery in Egypt was especially significant. So much so that Weizmann declare that the Jewish state was born on April 25, 1920 in San Remo.

Not since the Balfour Declaration was there such a significant milestone toward reestablishing Jewish sovereignty in the Land of Israel.  San Remo was celebrated widely by Jewish communities across the world.  This would not happen again until the 1947 UN partition vote and Israel’s May 1948 declaration of independence.

The division of the former Ottoman Empire under San Remo established many precedents toward the establishment of a Jewish State.  Lord Balfour, author of the Balfour Declaration on behalf of the British government, explained that it provided a niche for the Jewish people within the predominantly Arab controlled Middle East.

Howard Grief, author of “The Legal Foundation and Borders of Israel Under International Law” explains that the San Remo resolution supersedes even later UN resolutions according to a precedent in international law, that once you recognize a certain situation and execute it, you cannot reverse or change it.

It’s understandable why Balfour and the 1947 UN partition plan are celebrated as significant milestones. They are. But San Remo was an inextricable link between the two.  The resolution adopted represented the first time in 2000 years, since the Roman conquering of Israel, destruction of the Second Temple, and ensuing exile, that the international community called for the establishment and restoration of a Jewish homeland in the historic Land of Israel.  With 51 world powers and the UN’s predecessor, the League of Nations adopting San Remo’s resolution, it not only established the legal right for Jews to settle Israel, but mandated the world’s obligation to help do so.

While San Remo and all the other events leading up to the restoration of Jewish sovereignty to the Land of Israel are significant, whether the players in this process were cognizant of it, or motivated by it, ultimately these all simply affirmed the biblical authority and promise by God to do so.