Remembering the Holocaust in a Post-‘Sacred Survival’ Era

Home » Remembering the Holocaust in a Post-‘Sacred Survival’ Era 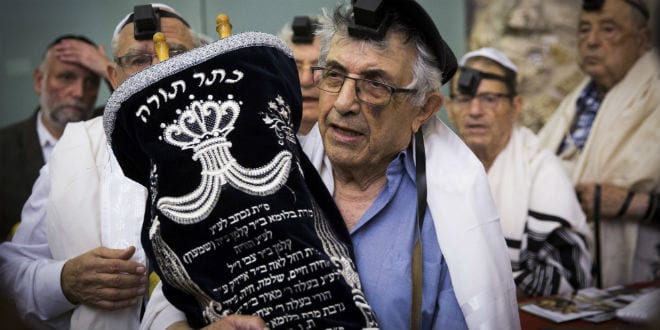 For several decades, the Holocaust shaped the way American Jews thought about their place in the modern world. For the generation that arose in the aftermath of World War II, the Shoah was the key to understanding the purpose of modern Jewish life.

For many, if not most, Americans, the Holocaust served as the primary justification for the defense of Israel. The failure of American Jews to demand the rescue of European Jewry when the Holocaust was happening also became the primary historical lesson that guided the community’s consciousness in the public square. It supplied both the motivation and the rationale for the transformation of a once fearful and passive minority group into a confident “Jewish lobby” that was willing and able to use its political and financial clout to agitate for freedom for Soviet Jewry, as well as to advocate for the U.S.-Israel alliance.

For the overwhelming majority of American Jews who were not Orthodox, these two elements that had become inextricably tied together—Holocaust remembrance and support for Israel—became the primary expression of Jewish identity. What historian Jonathan Sarna called “Federation Judaism” served secular Jews well in the era of the Soviet Jewry movement and the first few decades of Israel’s history, when efforts to destroy it were justifiably viewed as an attempt to perpetrate another Holocaust.

Dubbed “sacred survival” by scholars, the culture of American Jewry was an expression of philosopher Emil Fackenheim’s concept of a “614th commandment” that forbade granting Adolf Hitler and the Nazis any “posthumous victories.” Perpetuating Jewish life and Israel had become an end in of itself. And for those who grew up either during the Holocaust or, as in the case of the baby-boom generation, in its shadow, sacred survival was enough. It supplied a compelling argument for giving to Jewish philanthropies and activism, as well as for supporting local institutions like synagogues, even if the faith that ought to sustain them was largely lacking.

Today, the threats to Israel’s existence still exist—in terms of Iran’s nuclear ambitions, and the refusal of both the Palestinian Authority and Hamas to accept the legitimacy of a Jewish state, no matter where its borders are drawn attest. But the ability of the Jewish state to pull at the heartstrings of the overwhelming majority of American Jewry—let alone to supply it with a reason for its ongoing existence—is largely gone.

Contrary to the calumnies thrown at Israeli Prime Minister Benjamin Netanyahu, this has far less to do with American criticism of his policies than it does with demographic changes and assimilation, which rendered “sacred survival” irrelevant to most of those who now claim Jewish identity of one sort or another.

This is much to be regretted in terms of the growing inability of American Jews to unite in defense of Israel against both external threats and the growing clout of anti-Zionist groups whose aims work in tandem, either wittingly or unwittingly, with those who whose goals are incompatible with Jewish survival.

With each passing year, the number of Holocaust survivors—whose memories largely embodied the journey that Jews had taken from abject powerlessness and slaughter to current security and strength—decreases. With fewer of them to bear witness, the Holocaust could be fated to be viewed as one more piece of ancient history. Just as important, the growing willingness to universalize the Holocaust has lessened its ability to instruct Jews about their own history and fate.

That has led to a situation in which the Shoah is perceived by some as more of a weapon to be used against Israel and those seeking to perpetuate Jewish life as anything else. The canard that Israel is now as oppressive as the Nazis is the product of a desire by the Arab and Muslim world, and the Europeans, to justify their desire to erase history. But it has now been internalized by many Jews who have rejected both the idea of sacred survival, as well as the clear verdict of history that Zionism was the only logical and necessary response to the incurable virus of anti-Semitism.

Sacred survival as the sole motivation for Jewish identity was fated to collapse over time. Neither historical memory nor vicarious identification with Israel is enough to sustain Jewish life in the long run. Instead, its perpetuation of Jewish life requires a joyful embrace of all that is life-affirming in both Judaism and the heritage of Jewish peoplehood. To the extent that American Jewry will continue as a coherent community will be on the basis of choosing to embrace that positive vision.

But it would be a mistake to think that our focus on the Holocaust must be sacrificed in order to achieve a healthier Jewish future based on transmissible values.

To the contrary, the challenge for contemporary Jews is to incorporate the memories of the survivors and the sacrifice of the Six Million to forge a community that is forward-looking while still anchored in the same ideas of historical memory that have sustained Jews since they began recounting the story of slavery and the Exodus from Egypt thousands of years ago.

Nor, even as we rightly reject the narrow vision of sacred survival, should we forget that the fate of world Jewry is still linked to the tragedy of the Shoah. On the eve of Yom Hashoah this week, Israel’s Central Bureau of Statistics noted that by the end of 2018, the worldwide Jewish population stood at 14.8 million—a figure that is still less than the estimated 16.6 million who were alive in 1939 on the eve of the Holocaust.

Jewish life cannot be solely justified, as in Fackenheim’s lesson, as a response to the crimes of the Nazis and their collaborators. And thanks to the triumph of Zionism, the Jewish people are no longer helpless victims. But neither can we afford to forget that powerlessness is an invitation to future Jewish genocide.