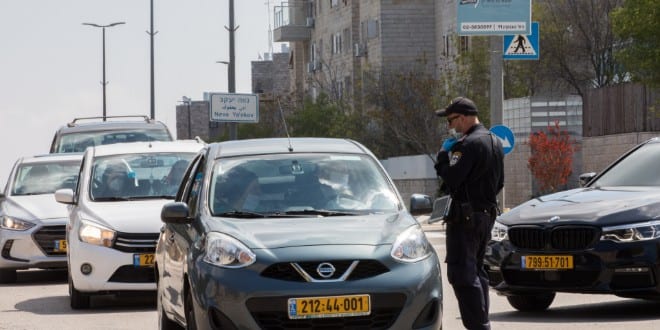 A few weeks ago, Israel’s Health Ministry officials were calling for Israel to “medically annex Judea and Samaria” for the duration of the coronavirus pandemic. The proposition was that while Israel and the Palestinian Authority are separate political entities, from a public health perspective, they are indivisible.

On a practical level, the call was superfluous. From the moment the virus arrived in Israel, the P.A.’s Health Ministry began cooperating in an unprecedented manner with its Israeli counterpart. The Palestinians followed Israel’s lead on virtually all aspects of the coronavirus fight. Palestinian medical teams received training in Israeli hospitals. Israel provided the P.A. with testing kits, protective gear, respirators and other vital equipment for fighting the pandemic. Even the Hamas regime in Gaza viewed Israel as the authority for dealing with the virus.

With all due respect to “medical annexation,” the collaboration between medical professionals doesn’t indicate any change of heart on the part of the Palestinian leadership. Both the PLO-controlled Palestinian Authority in Judea and Samaria and the Hamas regime in Gaza are fully capable of taking advantage of Israel’s help in fighting the pandemic while simultaneously using the pandemic as a means to harm Israel. And that is precisely what they are doing.

P.A. Prime Minister Mohammad Shtayyeh has long been considered a moderate. He was a member of the Palestinian negotiating team with Israel. He is a Western-educated academic and a favorite of the European Union. Many viewed P.A. leader Mahmoud Abbas’s decision to appoint Shtayyeh prime minister last year as a sign of moderation.

Alas, the optimism was misplaced.

At a press conference in Ramallah in late March, Shtayyeh propagated multiple blood libels against Israel.

Against Israeli  soldiers, Shtayyeh alleged, “We have heard testimony that some soldiers are trying to spread the virus through the door handles of cars. It is a case of racism and hatred by people who hope for the death of the other. We will add this to the list of crimes they’ve committed.”

As for Israel as a whole, Shtayyeh accused Israel of using Palestinian workers in Israel as a biological weapon against the Palestinians as a whole. He said Israel wants the 30,000 Palestinians working for Israeli employers to keep working so that they can get infected with coronavirus and then go home and infect their fellow Palestinians. He added that a resident of his village who worked in Israel returned to the village infected and proceeded to infect 20 of his neighbors with the virus.

In the spirit of cooperation with the P.A., and in the hope of preventing mass infection among Palestinians, Israel took the unprecedented—and risky—step of permitting P.A. security forces to operate in Arab villages in Jerusalem and in the Palestinian villages in Area C. Despite the fact that in accordance with the bilateral agreements between Israel and the Palestinians, Israel has sole security authority in those areas.

Rather than thank Israel, Shtayyeh claimed that Israel was refusing to help the Palestinians handle the coronavirus epidemic and deliberately endangering them.

For instance, the Facebook page of the PLO’s Commission on Prisoners Affairs ran a special video clip to mark “Palestinian Children’s Day” earlier in the month accusing Israel of infecting Palestinian minors in Israeli detention centers. In the dramatization, small children in handcuffs are attacked by a plastic model of the coronavirus.

The P.A.’s official television network regularly hosts P.A. spokesmen who accuse Israeli civilians in Judea and Samaria of deliberately infecting Palestinians with the virus by spitting on them and touching ATM machines in Palestinian villages.

While the P.A. wages a Nazi-like campaign of incitement against Israelis in its media and physically blocks peaceful ties between Israelis and Palestinians, it continues to ask Israel for handouts: Shtayyeh requested and received a half-billion shekel loan (roughly $140 million) from Israel.

And what will the money be used for?

While Shtayyeh, the blood libel proliferator, claims that the money will be used to save the P.A. economy from the ravages of the coronavirus, the P.A. officially announced that terrorists imprisoned in Israeli jails and their families will receive money before impoverished Palestinians.

The P.A.’s lack of concern for its people’s welfare is all the more apparent when Shtayyeh’s fundraising for the poor is seen in the context of his actual employment policies: The security forces in Area C blocking Palestinians from selling to or working with Israelis are following Shtayyeh’s orders. Shtayyeh has barred Palestinians from working in Israeli communities in Judea and Samaria and so has doomed tens of thousands of Palestinian families to destitution.

The P.A. is also using this period, as Israelis are under coronavirus quarantines, to massively expand its illegal building activities around the Israeli communities in Judea and Samaria. For instance, extensive construction activities are being carried out around the city of Efrat in Gush Etzion south of Jerusalem.

The first is adjacent to the northern entrance to the city, where the P.A. is building along the access road to Highway 60. The building physically threatens the residents in the northern neighborhoods of Efrat and transforms the access road into a gauntlet that residents will have to run every time they enter or leave the city.

The second focal point is around Eitam Hill. Eitam Hill is both Efrat’s main reserve land for urban development and a strategic topographical point that connects Efrat to eastern Gush Etzion and particularly to the major community of Tekoa.

The Palestinians have long engaged in illegal building around the hill to prevent its development and to isolate the eastern communities in Gush Etzion. Since the onset of the pandemic, the building there has also intensified.

Like its PLO counterpart, the Hamas regime in Gaza has run a similarly poisonous stream of anti-Semitic incitement against Israel, claiming that the Jews are waging biological warfare against the Palestinians.

But as always, Hamas’s central effort is more directly connected to physical warfare than the PLO’s. Last week, optimistic reports began surfacing in the Israeli media claiming that Israel and Hamas were holding secret talks to reach a deal whereby in exchange for assistance in fighting the coronavirus, Hamas would return the bodies of IDF soldiers and the Israeli hostages it has been holding since 2014.

Unfortunately, the Israeli officials leaking the optimistic projections forgot who they were dealing with.

Hamas doesn’t care about protecting Gazans from the coronavirus, Israel does. The same terrorists who cynically use Gaza’s children as human shields for missile crews aren’t going to sacrifice any leverage against Israel to protect their people from the coronavirus. The moment they realized that Israel was committed to protecting Gaza from mass infection, they decided to exploit Israel’s concern.

Hamas insisted that Israel provide assistance in fighting coronavirus for free. And Israel did. Israeli medical professionals trained Gazan medical teams from Shifa Hospital in Gaza on how to treat coronavirus patients. Israel allowed an advanced PCR medical device, used for the rapid detection of coronavirus, to be imported into Gaza last week.

As for the release of Israeli hostages and the remains of IDF soldiers, according to Arab media reports, the terror group’s position hasn’t been impacted by the pandemic. Hamas demanded that Israel release 250 terrorists from prison, but not in exchange for the hostages and bodies of fallen soldiers—but rather in exchange for “information” about them.

The behavior of leaders of the PLO-P.A. regime in Judea and Samaria and the Hamas regime in Gaza shows us two things: First, both groups remain obsessively focused on their war against Israel. Second, the notable aspect of their behavior is that it highlights the difference between authoritarian regimes and the leaders of free societies.

Since the onset of the pandemic, all democratically elected governments have made their share of mistakes in contending with it. But the struggles of the governments of Italy, Israel, Taiwan, the United States and all the rest share a common key feature: Their top priority is to protect the lives and well-being of their citizens.

In contrast, we see that like the Palestinian regimes, authoritarian regimes in China, Iran and beyond have busied themselves with principally trying to exploit the pandemic for their own benefit.

China, the source of the coronavirus, is hiding much of what it knows about the origins of the pandemic and vastly underreporting their infection and death rates. The Chinese hide this vital information to present themselves as more competent in handling the virus than the “bungling democracies” struggling to contain it, and to build their conspiracy theory that the United States is the source of the pandemic. At the same time, China has ratcheted up its threats against Taiwan and has allegedly tested another nuclear weapon.

Like the Palestinians and the Chinese, the Iranians accuse Israel and the United States of inventing and spreading the virus. After they rejected a U.S. offer for humanitarian assistance to fight the coronavirus, the Iranians began using the pandemic as a fundraising tool.

They demand assistance from the International Monetary Fund and the European Union and exploit the political cleavages in the United States to pressure the Trump administration to cancel the U.S. economic sanctions on Iran. All the while, Iran is threatening U.S. forces in Iraq and continuing its uranium enrichment activities.

Through their behavior, the Palestinians show that peace is a dead issue. Israel has permanent, vital interests in Judea and Samaria. It needs to secure those interests by applying its sovereign laws wherever it deems necessary, and bar the P.A. from operating in its territory.

More broadly, through their conduct, the Palestinians, like their authoritarian brethren in China, Iran and beyond, drive home the difference between democracies and dictatorships.

There are good guys and bad guys in this world. In the future, when we get confused about who is on which side, all we will need to do to figure out where justice lies is look back at how each behaved during the coronavirus pandemic.