Israel and Trump’s War on the Coronavirus

Home » Israel and Trump’s War on the Coronavirus 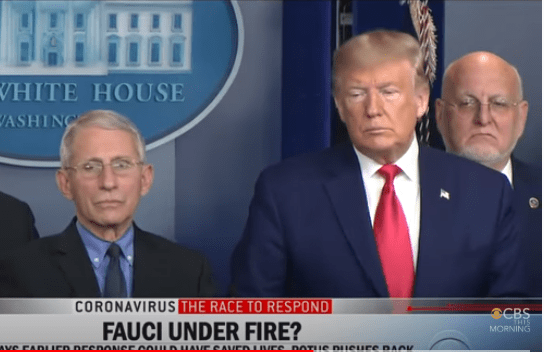 The presidency of Donald Trump has shaped coalition talks between Israeli Prime Minister Benjamin Netanyahu and Blue and White Party chairman Benny Gantz. For weeks, the chief stumbling block holding up a unity government deal was Gantz’s attempt to delay or block Israeli implementation of Trump’s peace plan, which greenlights the implementation of Israeli law over parts of Judea and Samaria.

Gantz argued that there was no reason to rush ahead, in the midst of the coronavirus pandemic. Israel should wait six months until the danger passes and then figure out how to proceed. Netanyahu rejected Gantz’s position. He insisted that Israel apply its laws to the Jordan Valley, the northern Dead Sea, and the Israeli communities in Judea and Samaria as soon as the joint U.S.-Israeli mapping committee completes its work, by early July at the latest.

Netanyahu, whose position carried the day, was right to view the issue as urgent. To understand just how urgent it has become, we need to consider Trump’s political challenges, seven months before the presidential election in November.

In the midst of the coronavirus pandemonium, major issues have fallen by the wayside. In Israel, no one remembers that Netanyahu’s criminal trial was supposed to begin two weeks ago. In America, almost no one noticed that Wisconsin held Democratic presidential primaries on Tuesday between former vice president Joe Biden and socialist Sen. Bernie Sanders. Sanders’ decision to withdraw from the race following his defeat in Wisconsin would have been the story of the week a month ago. But in the event, no one really cared.

Although Biden is the party establishment’s choice for nominee, he is not an ideal candidate. The 77-year-old career politician can’t get through a public appearance without tripping on his tongue. In an interview with the friendliest of interviewers on MSNBC last week, for instance, Biden referred to Wuhan, China as Luhan and referred to the national drugstore chain CVS as CVC. Even sympathetic commentators are compelled to raise questions about his mental fitness for office.

In the face of Biden’s constant gaffes, talk has exploded on the possibility that the Democrats will ignore the results of the primaries and draft New York Governor Andrew Cuomo as their presidential candidate. How this could happen is unclear. Biden has won the primaries. But in truth, it doesn’t matter too much who ends up being the Democratic candidate—it won’t decide the outcome of the race.

The spread of the pandemic across the United States has reshuffled the political deck. Until the pandemic broke out, the U.S. economy was prospering and Trump was reaping the rewards of the record unemployment, booming stock market and optimistic economic forecasts. His election rallies drew tens of thousands of supporters, whether they took place in the very red South Carolina or very blue California.

Then the coronavirus arrived. The virus upended Trump’s electoral strategy and compelled him to change his basic governing philosophy. Trump is a rhetorical pugilist and a policy iconoclast. He thrives in appearances before a mass audience where he rallies large crowds while resonating their frustration with Washington’s ruling class. The coronavirus has made rallies impossible.

As for his programmatic iconoclasm, the pandemic has compelled Trump to embrace “scientific experts,” even as they, like their counterparts in the economic and national security spheres, have provided incorrect information and assessments about the coronavirus.

Trump rejected the “expert” opinion of the foreign policy “experts” and the economic “experts” in forging his successful foreign policies and economic policies. But given the massive uncertainty about the nature and danger of the coronavirus, ignoring scientific advice is far riskier a prospect, particularly in the midst of a public health crisis.

The problem is that the scientific experts themselves have built up a terrible track record. Dr. Anthony Fauci, the head of the National Institute of Allergy and Infectious Diseases and a member of Trump’s coronavirus task force, said in January that the virus wasn’t a significant threat to the U.S. Currently, Fauci and his expert colleagues in the federal medical bureaucracy are downplaying the potential of medicines that seem to work in treating the virus.

For instance, Fauci reportedly opposes recommending the use of drug combinations including hydroxychloroquine, which has brought positive results to coronavirus patients worldwide. They reportedly argue that the drugs, developed to treat other ailments, haven’t been tested as rigorously as drugs generally are tested before being used for new purposes.

Likewise, despite the fact that the U.S. has the ability to perform 500,000 coronavirus tests a day, last week only 100,000 were being performed daily because the Food and Drug Administration won’t permit the use of tests produced by private firms.

In other words, in the midst of a pandemic that has shuttered the U.S. economy, the “experts” are gumming up the works for freeing people to return to their jobs and restart the economy.

Democrats for their part are not crediting Trump for his willingness to defer to experts. Rather, as is their wont, the Democrats are moving the goalposts. Several Democratic governors have been using the pandemic as a means to score political points against Trump. Cuomo for instance, repeatedly accused Trump of responsibility for the shortages in medical protective equipment and respirators in New York—despite the fact that the federal government has been rushing massive quantities of supplies to New York and New Jersey to keep up with demand.

On Jan. 29, against the advice of many medical experts, including the World Health Organization, Trump shut down air traffic from China to the United States.

Cuomo, House Speaker Nancy Pelosi, Biden and the media attacked the move as racist. Cuomo, who demanded that the gates of America remain open to Chinese travelers, now accuses Trump of having ignored and downplayed the threat the coronavirus posed to the United States.

Cuomo and his fellow Democratic politicians are lavishly supported by the media in their efforts to rewrite the history of the past two months. This week, for instance, the Associated Press published an article that rewrote the history of the past two months. The AP article stated everyone was worried about the coronavirus except Trump—including Pelosi, who urged San Franciscans to participate in Chinese New Year’s celebrations in San Francisco’s Chinatown.

Whereas the Democrats and the media are going out of their way to protect China from criticism, it works out that China’s behavior has been far more ominous than even its critics first alleged.

It is widely recognized that the Chinese regime waited two months to tell the world that the virus is transferred between humans and is exceedingly infectious. This week the New York Post reported that, while lulling the world into complacency, from late January to late February, the Chinese regime barred foreign medical supply companies with manufacturing plants in China from exporting their medical equipment. For instance, Chinese officials barred the U.S. firm 3M from shipping protective gear to the United States. China seized all of the coronavirus-relevant equipment for itself.

Even worse, according to administration officials who spoke to the New York Post, from late January until late February, the Chinese bought $1.2 billion worth of medical protective gear. This included two billion masks and more than 25 million protective suits.

Last week, Holland, Slovakia, the Czech Republic, Poland and Australia reported that the protective gear and virus detection tests they purchased from China were defective. Wednesday, Finland reported its Chinese gear was defective.

Despite this, since the pandemic broke out, the Democrats and the liberal media have served as a megaphone for Chinese propaganda. They parroted the Chinese data regarding the Chinese infection and death rate despite the fact that U.S. intelligence agencies reported that the Chinese data are fraudulent.

Their motivation is obvious. They seek to paint Trump as incompetent. In light of their efforts, not only does Trump need to manage the crisis based on the advice of “experts” that have wrongly assessed the virus from the beginning, he needs to do so in an environment where his opponents are working with China to undermine public trust in his leadership.

This then brings us back to the elections. In Israel, the unemployment rate rose from 3 percent to 25 percent in two weeks. According to economist Stephen Moore, U.S. unemployment rates are likely as well to rise from 3.5 percent at the end of February to 23 percent by the end of the month. Ten million new Americans registered as unemployed in the last week of March, the largest weekly figure in U.S. history by a factor of more than 10.

To successfully lead the United States through the crisis, while facing a concerted effort by the media, China and Democrats to undermine the public’s trust in him, Trump needs to figure out a way to get the U.S. back to work within weeks while minimizing the infection and death rate even as he is receiving bad advice from his experts.

This brings us back to Israel, where the stakes in Trump’s success couldn’t be higher.

On April 7, Forbes reported that Iran has deployed an array of anti-ship missiles and large rockets overlooking the Strait of Hormuz. Whereas Trump refuses to cancel U.S. economic sanctions against Iran—while offering Iran humanitarian assistance in handling the coronavirus—last week Biden said that if he is elected president, he will cancel the U.S. economic sanctions on Iran. The Democratic Party is committed to returning the United States to the nuclear deal.

All of this seems unrelated to the coronavirus, but of course, it isn’t. It is clear that the same courage that enabled Trump to reject the advice of failed experts on Iran and the Palestinians is required in the war on the coronavirus. If Trump does not find the advisers that will help him to successfully shepherd the United States through the coronavirus crisis and save the U.S. economy from depression and collapse, the coronavirus will beat him in November.

This means that Netanyahu is right. We cannot know if Trump will beat the virus or if, with the lavish support of the Democrats, the “experts” and the media, the virus will beat him.

What is clear is that the future of Israel-U.S. relations, like the fate of Iran’s nuclear weapons program, will be determined by Trump’s ability to win the war against the coronavirus.