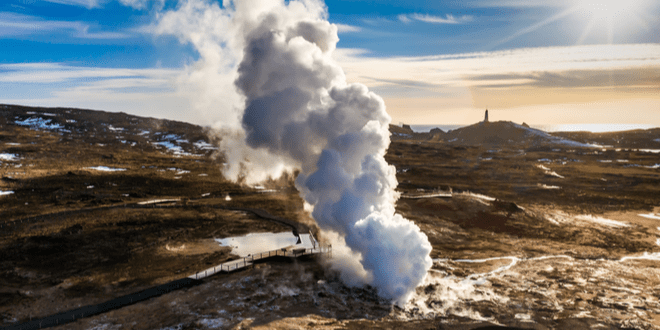 The waves of earthquakes are rocking the center of the U.S. and the sudden awakening of several volcanoes around the world may be a sign of the pre-Messiah shake-up predicted by the prophets. At the same time, several far more mild earthquakes in Israel seem to embody the Biblical concept of God’s mercy being aroused by Man’s actions.

WAVE OF EARTHQUAKES IN CENTRAL U.S.

The earth seems to be waking up as seismic activity is being reported around the globe. Last month, a 6.5 magnitude earthquake shook Idaho, generating a multitude of avalanches. The quake was the largest in the region since a 6.9 quake hit in 1983. There have been 238 earthquakes in Idaho in the last week according to the U.S. Geological Survey website. Five of those have been substantial in size rating 4.0 to 6.5. Idaho isn’t new to experiencing earthquakes.

Two weeks before Idaho felt the earth move, Salt Lake City, Utah, approximately 340 miles away from the Idaho epicenter, was hit by a 5.7 magnitude earthquake. Since that earthquake, there have been 886 smaller earthquakes and aftershocks in the Salt Lake area.

The belly of the country is clearly rumbling as the University of Utah Seismograph Station mapped a total of 980 tremors throughout Idaho, Utah and Wyoming since March 18.

YELLOWSTONE GETS GREENLIGHT DESPITE “PULSATIONS”, OVER 100 EARTHQUAKES

Though the epicenter in Idaho was over 200 miles distant from the Yellowstone caldera, Yellowstone experienced 111 earthquakes in March. The Yellowstone Volcano Observatory released its monthly report on Wednesday, declaring its current alert level “normal” and its aviation color code “green.”

“These earthquakes are caused by tectonic extension of the region and are not related to Yellowstone, nor will they have a significant impact on the Yellowstone system,” the report stated.

This green light was issued despite a large section of the Yellowstone caldera called the Norris Geyser Basin, the hottest, oldest, and most dynamic of Yellowstone’s thermal areas, being discovered as pulsating, inflating and deflating by several inches in erratic bursts. In 2013, the Norris basin rose 5.9 inches for two consecutive years., rising an astonishing five inches in the last 20 years.

Although the probability of an eruption at Yellowstone may (or may not) be small, the results of such an event would be catastrophic in the extreme. Yellowstone Park is seismically active with more than 10,000 thermal features of which more than 500 are geysers. The Yellowstone caldera is listed as the most dangerous supervolcano in existence and as such, is the most monitored volcano in the world.  It has erupted three times over the last 2 million years, most recently about 70,000 years ago. Yellowstone has produced three cataclysmic eruptions that scientists know of: at 2.08, 1.3, and 0.631 million years ago.

An article in Discover explained the epidemic of earthquakes as being caused by the continent “stretching,” a process described in German as “horst and graben.”

“As North America continues to stretch across the Basin and Range, these faults can generate earthquakes as the valleys continue to drop,” the article explained. “Both of the earthquakes that happened in Nevada and Utah recently were on one of the normal faults that bounded a valley.

VOLCANOES AROUND THE WORLD

But it is not just the central U.S. that is experiencing a seismic awakening. Since January 21, the Reykjanes peninsula in Iceland has experienced more than 8,000 earthquakes and about 10 centimeters of land uplift due to magma intrusions underground. Geologists believe the volcanic systems in the region become active about once every thousand years. The last time this region experienced volcanic activity was 800 years ago. Beginning in the tenth century, the volcanically volatile period lasted for 300 years.

The region is about 30 miles southwest of Reykjavik, Iceland’s capital, but is only nine miles away from Iceland’s international airport. A major eruption could shut down travel for all of Iceland as well as endanger the nearby town of Grindavik as well as the Blue Lagoon, a popular tourist destination. There is also a nearby geothermal powerplant which could be endangered by volcanic activity.

As if that wasn’t enough, the Krakatoa volcano in Indonesia exploded on Friday. Though two relatively small eruptions were recorded, the volcano is a hotspot and cause for concern. In 188, a Krakatoa eruption had one of the highest death tolls of any volcanic eruption, killing more than 36,000 people. The most recent eruption at the site was in 2018, generating a tsunami and killing 437 people.

Volcanoes are explicitly mentioned by the prophets as playing a role in the end of days, preparing the world by burning away impurities as a crucible is used in metallurgy to purify metal. This process is described in Zechariah.

END OF DAYS SHAKE AND BAKE, BUT ISRAEL IS DIFFERENT

This type of cataclysmic seismic activity is mentioned specifically by the prophets as an aspect of the End-of-Days process.

The prophet describes this catastrophic period as a process to purify the inhabitants of the earth for the Messianic period to follow.

While volcanoes and earthquakes rock the world, it should be remembered that catastrophic end-of-days earthquakes are described by the Biblical prophets in two distinct contexts: inside Israel and outside of Israel. While most of these earthquakes shook seismically active regions it should be noted that Israel, sitting on the Syrian-African rift, has also experienced several tremors in the past year. These quakes have been far more gentle. The holy land has experienced over 30 tremors since the beginning of the year but only one, a mild 3.8 shaker off the coast of Haifa last month, was felt by Israelis.

This is significant as the pre-Messiah war of Gog and Magog is prophesied to be accompanied by earth-changing earthquakes.

On that day, when Gog sets foot on the soil of Yisrael—declares Hashem—My raging anger shall flare up. For I have decreed in My indignation and in My blazing wrath: On that day, a terrible earthquake shall befall the land of Yisrael. The fish of the sea, the birds of the sky, the beasts of the field, all creeping things that move on the ground, and every human being on earth shall quake before Me. Mountains shall be overthrown, cliffs shall topple, and every wall shall crumble to the ground. Ezekiel 38:18-20

These pre-Messiah quakes are predicted to bring about topographic changes to Israel. Even though Jerusalem is over 3,600 feet higher than the Dead Sea, the mountaintop capital is actually quite close to the sea, making it likely that a major earthquake in the geologically active Jordan Rift would be the source of the earthquake that is prophesied to drastically change the topography of Jerusalem in the end-of-days.

Though these pre-Messiah earthquakes in Israel sound as cataclysmic as those outside of the Holy Land, Jewish tradition teaches that the catastrophes inside of Israel can be mitigated based on the merits the Jews acquire through the performance of Biblical commandments. The concept is referred to as B’Eeta Achishena referred to by the prophet Isaiah.

The smallest shall become a clan; The least, a mighty nation. I Hashem will speed it in due time. Isaiah 60:22

The term is used by rabbis and Jewish theologians to describe the tension between God’s greater plan in light of Man’s will and actions. This is especially relevant in reference to the Messiah and Man’s actions affecting when the Messiah will arrive.