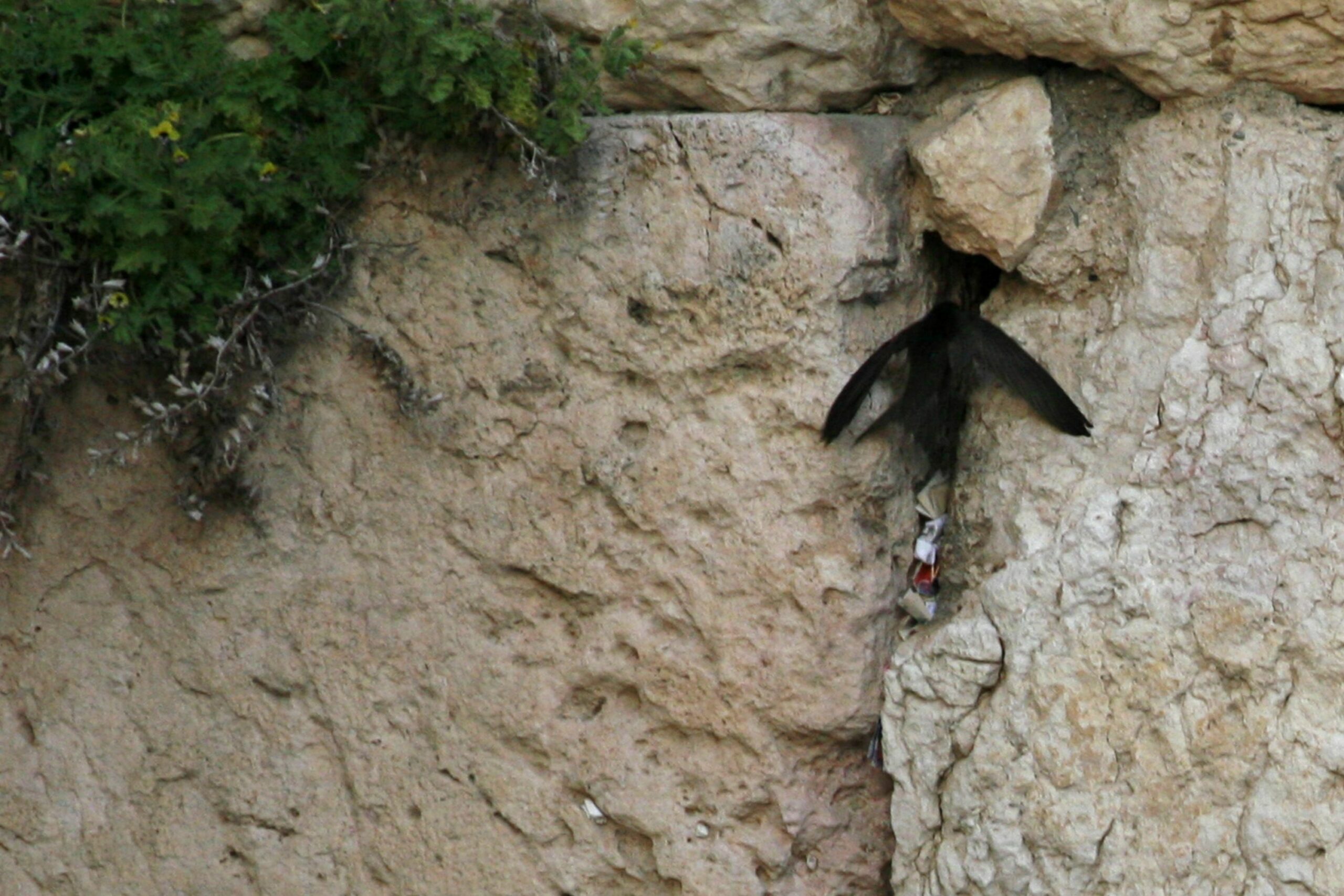 The Western Wall has almost been abandoned by worshipers in recent weeks because of state restrictions due to the coronavirus – but it is still being visited in large numbers throughout the day and night by swifts – among the fastest birds in the world. The Kotel is home to a large colony of the small migratory birds that flock to Israel every February to nest in crevices in walls and cliffs.

During breeding, swifts are usually active during the day looking for insects to eat hunting, and then they nest at night. But, unusually, the swift colony at the holy wall in Jerusalem don’t seem to sleep. The reason, according to a Tel Aviv University (TAU) zoologist who studied phenomenon, is that in 2016, the lighting system at the Western Wall was replaced by a much more comprehensive system.

Prof. Noga Kronfeld-Shor and her team of researchers hypothesized that the added illumination would result in a further extension of the swifts’ activity hours and perhaps allow them to exploit moths and other nocturnal insects attracted to the light that were not present at night before then.

Her study, published in July 2019 in the prestigious peer-reviewed, multidisciplinary science and technology journal Scientific Reports, has just been included in the journal’s “Top 100 Downloads for 2019” out of some 20,000 studies it published last year. The 100 List features the research of authors from around the world and across disciplines – and the Kotel swift study aroused an amazing amount of interest.

According to the journal, the study by Kronfeld-Shor and Dr. Eran Amichai, both of TAU’s school of zoology, was downloaded 14,944 times during 2019 and has passed 15,000 downloads since then.

“A position in the top 100 most downloaded articles is an extraordinary achievement – your science is of real value to the research community,” Scientific Reports chief editor Richard White wrote to the researchers.

According to the TAU team, light pollution has had a decisive effect on swifts exposed to intense artificial light at night. “We think the article generated a lot of interest because it deals with a major environmental issue extensively researched in recent years: the impact of light pollution on animals,” explained Kronfeld-Schor.

“In our study,” she continued, “we sought to determine whether strong lighting throughout the night affects the routine of swifts nesting between the Western Wall stones, and we found that, indeed, it does. The swifts are active all night in the Western Wall colony versus daytime activity in the other three colonies here that we studied. The impact of this increased activity, however, bears further exploring.”

They found that, surpassing their expectations, Western Wall swifts were active throughout the night while those of the other three migratory swift colonies went to rest in their nests.

Swifts live on all the continents except Antarctica, and most types have a short, forked tail and very long swept-back wings that resemble a crescent or a boomerang. Eggs are laid in March and April, incubated for 18 to 20 days, and the young break out of their shells 34 to 43 days later, in late May and June). Shortly after fledging, the swifts leave their breeding colonies and migrate to unknown destinations.

“The use of artificial light at night is a rapidly expanding anthropogenic [environmental pollution originating in human activity] effect that transforms nightscapes throughout the world, causing light pollution that affects ecosystems in a myriad of ways. One of these is changing or shifting activity rhythms, largely synchronized by light cues.” They used acoustic loggers to record and quantify activity patterns during the night of the common swift.

Artificial light at night and its consequent light pollution is one of the most dramatic transformations caused by the industrial revolution,” the TAU team wrote. “Starting with gas lights in the early 1800s, and more so with the adoption of electric bulbs in the late 1800s, humans have increasingly introduced light into nighttime. Coupled with the global increase in human population and its expansion into more and more areas and environments, the last two centuries have seen an enormously significant increase in night light levels throughout the world and in almost all habitats, with the rate of this light encroachment increasing annually.”

The results, they concluded, relate to a single population under each light condition and thus represent a small sample size. “In addition, since we studied the population level and have no knowledge of individual behaviour, we are cautious in assessing the generality of these results. However, to our knowledge this is the first report of a diurnal vertebrate species remaining active throughout the night in response to artificial light at night.”