WHO: Abortions Must Continue even at Expense of Containing Coronavirus

Home » WHO: Abortions Must Continue even at Expense of Containing Coronavirus 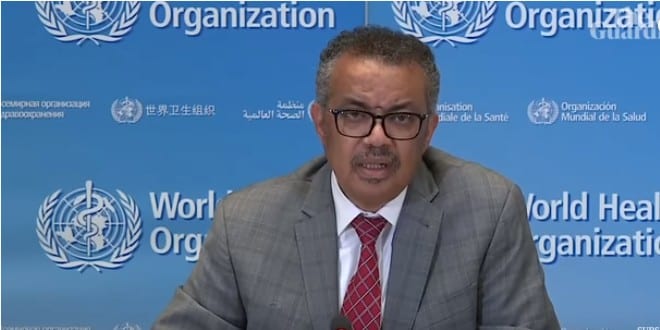 The World Health Organization (WHO) has been targeted by criticism that it bungled the current pandemic but criticism of a different sort is plaguing the organization now. The WHO released a policy statement on Saturday stating that they will continue to prioritize abortion, diverting medical assets towards what they labelled “reproductive health.

“This includes contraception, quality health care during and after pregnancy and childbirth, and safe abortion to the full extent of the law,” the organization added.

This is consistent with the position of its parent organization, the United Nations. In 2018, the United Nations Human Rights Committee (UNHRC) drafted a resolution placing the life of the mother ahead of that of the unborn child.

“Although states parties may adopt measures designed to regulate voluntary terminations of pregnancy, such measures must not result in violation of the right to life of a pregnant woman or girl, or her other rights under the Covenant,” the resolution read.

The resolution from the UNHRC also established assisted suicide as a universal human right.

Rabbi Yosef Berger, the rabbi of King David’s Tomb on Mount Zion, noted that the

“This love of abortions is a replay of Pharaoh throwing babies into the [River] Nile,” Rabb Berger said.

Then Pharaoh charged all his people, saying, “Every boy that is born you shall throw into the Nile, but let every girl live.” Exodus 1:22

“People read the Bible today and think it can’t be true. It is exaggerated and what is written could never happen today,” Rabbi Berger said. “But the situation today is twice as bad as it was in Egypt. Pharaoh only killed the male babies.”

Rabbi Hillel Weiss, the spokesman for the nascent Sanhedrin, reacted strongly to the pro-abortion by the WHO.

“This is simply horrifying. Abortions and assisted suicides are both explicitly against the Noahide Law which prohibits the spilling of blood,” Rabbi Weiss told Breaking Israel News. “These values they call human rights have only one possible outcome: the destruction of humanity.”

The Sanhedrin is working with the leaders of several nations to establish a new international body based in Jerusalem on Biblical values that will replace the UN.

The World Health Organization (WHO) is the branch of the United Nations responsible for international public health. It has a big job but has a correspondingly large annual budget of $4.2 billion. Founded in 1851, before the UN was established, the WHO was tasked with combating several pandemics, chief among them cholera, yellow fever, and the bubonic plague. The WHO was nonetheless criticized for how it handled both the 2009 Swine Flu pandemic and the 2013 Ebola outbreak with claims the organization was top-heavy with bureaucracy and that it spread misinformation.

But its handling of the coronavirus pandemic has brought even more criticism down upon the organization with claims that it chose to overlook China’s mishandling of the outbreak to a degree that led to its spread. China has been accused of suppressing information about the outbreak within its border including when it began including attempts to censor news of the disease entirely. China initially claimed there were no cases of person-to-person infection, a claim which now seems absurd given the virus’ volatility. The Wuhan wet market where the epidemic began has been reopened.

The WHO has also pursued a policy of censuring Taiwan due to pressure from China. This policy continued despite Taiwan’s success in handling the epidemic. In an interview, assistant director-general Bruce Aylward appeared to dodge a question about Taiwan and when the question was repeated, the connection was “cut off” blaming internet connection issues. When the video chat was restarted, he was asked another question about Taiwan but he claimed to have already answered the question and formally ended the interview. Furthermore, WHO then attempted to reduce their association with Aylward and subsequently erased his page on their website, redirecting visitors to the page to a general leadership page.