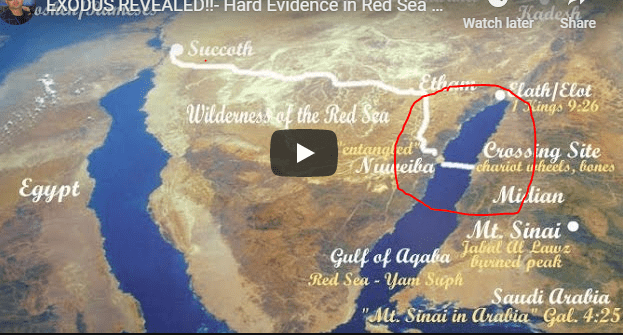 An earthquake in Eilat just a few days before the holiday of Passover recreated what some believe were the conditions that preceded the splitting of the sea that allowed the Israelites to flee the Egyptians during the Exodus. Coming while earthquakes rock locations all over the globe, BIN takes a look at the significance of the end-of-days wave of earthquakes the Bblical Prophets predict will shake the world versus the pre-Messiah earthquake that will reshape Jerusalem.

A 4.3 magnitude earthquake rocked Eilat in southern Israel on Sunday morning. A slightly stronger 4.6 quake was reported by Petra News Agency across the border in Aqaba, Jordan at around the same time. The epicenter of the quake was reported to be about 40 miles south of the city in the Red Sea.

Though the exact location of the miraculous parting of the sea after the Exodus from Egypt is unknown, some Biblical scholars place it at the south-eastern edge of the Sinai Peninsula near what is known today as the Straits of Tiran, about 140 miles south of Eilat.

Simcha Jacobovici, an Emmy-winning investigative journalist, has some unique theories about the Exodus. Jacobovici claims the Exodus took place at the time of the volcanic eruption on the island of Santorini, which is considered one of the strongest volcanic eruptions of all time. Basing himself on geologists, he claims that “extreme seismic activity” generated many of the phenomena that accompanied the Exodus from Egypt including the splitting of the sea.  He bases his theory on similar phenomena that occurred during a natural disaster at Lake Nyos in Cameroon in 1986, which was also caused by irregular seismic activity.

Earthquakes have been circling the globe with one hitting north of Israel on Friday. With all this happening, it is important to reexamine the significant differences between the end-of-days’ wave of earthquakes that will shake the world versus the earthquake that will prepare Jerusalem for the Messiah.

The last week has seen several quakes in the region. Local media reported on Friday that a 4.7 magnitude earthquake hit off the coast of the Mediterranean near the border between Syria and Lebanon. People in both Beirut and Tripoli reported feeling the tremor that lasted for several seconds at approximately 9:15 PM. Syrian news also reported the tremor being felt in Latakia where the Russian military airbase is located.

WAVE OF EARTHQUAKES AROUND THE WORLD

Recent seismic activity has not been limited to the Middle East. At the same time as the northern Mediterranean was shaking on Friday, a 4.9 earthquake hit about 23 miles south of Palm Springs, California and was followed by eight aftershocks that ranged in magnitude from 2.6 to 3.7.

Since the coronavirus began to spread at the end of last year, a wave of earthquakes is ranging around the world, largely overlooked as the fear of infection leads people to ignore the shaking under their feet.

Last Tuesday, Idaho was hit by a 6.5 magnitude earthquake. About 30 minutes after the main quake, a 4.8 magnitude aftershock was reported to the southeast. There were more than a half-dozen aftershocks in the hours following the main quake.

Authorities were adamant that there was no connection between the region near Boise shaking and any seismic activity at the Yellowstone caldera over 300 miles away even though there have been eight earthquakes at Yellowstone in the last three days ranging in intensity from 1.5-2.9 magnitude.

Two weeks ago, an island region between Russia and Japan was hit by a 7.5 earthquake. The same week, Croatia’s capital city of Zagreb was hit by a 5.3 tremor, the most powerful earthquake the region had felt in over 120 years. Turkey, Iran, Manila, Japan and Mexico have all been hit by major earthquakes in the last three months since the pandemic has been circling the globe.

END OF DAYS EARTHQUAKES AROUND THE WORLD

Earthquakes and volcanoes are explicitly mentioned by the prophets as playing a role in the end of days, preparing the world by burning away impurities as a crucible is used in metallurgy to purify metal.

This multifaceted natural catastrophe scenario facing that region of the country conforms to the prophet description of the period preceding Messiah, which will serve as a process to purify the inhabitants of earth for the Messianic period to follow.

But catastrophic end-of-days earthquakes are described by the Biblical prophets in two distinct contexts: inside Israel and outside of Israel. While most of these earthquakes shook seismically active regions it should be noted that Israel, sitting on the Syrian-African rift, has also experienced several tremors in the past year. These quakes have been far more gentle. The holy land has experienced over 30 tremors since the beginning of the year but only one, a mile 3.8 shaker off the coast of Haifa last month, was felt by Israelis.

This is significant as the pre-Messiah war of Gog and Magog is prophesied to be accompanied by earth-changing earthquakes.

These pre-Messiah quakes are predicted to bring about topographic changes to Israel. Even though Jerusalem is over 3,600 feet higher than the Dead Sea, the mountaintop capital is actually quite close to the sea, making it likely that a major earthquake in the geologically active Jordan Rift would be the source of the earthquake that is prophesied to drastically change the topography of Jerusalem in the end-of-days.

Though it is impossible to absolutely predict seismic activity, seismologists warn that the Middle East is due for a major shake-up. Seismologists estimate that according to statistics and the geologic history, the region should experience a major quake every 80-100 years. The last major quake was in  1927 and registered 6.2 on the Richter Scale killing 500 people. Another major earthquake is therefore now due.