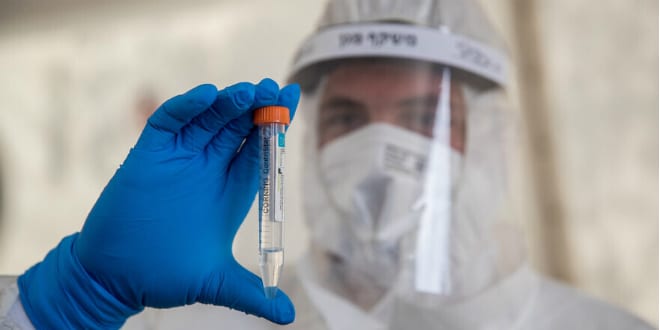 We are living through a grave crisis. And crises have a knack for clarifying fundamental truths. The coronavirus pandemic has exposed several of them.

First, our ability to control our world is limited. An unknown number of months ago, through unclear means, the coronavirus broke out in China and landed in the rest of the world shortly thereafter.

Over the past month, everything that makes up our lives and our world came to a grinding halt. Schools closed. Workplaces shut down. Israel’s previously stable and promising economic outlook has disappeared. No one can tell us when or if our lives will ever go back to normal and what our economy will look like when this is over.

The second truth the pandemic has shown us is that no matter how bad things are in Israel, the plight of our neighbors is immeasurably worse.

Consider Egypt. The Egyptian economy has been teetering on the brink of collapse for a decade. The Egyptian health system failed long before the coronavirus was a gleam in a bat’s eye. Government hospitals lack both basic equipment and a sufficient number of physicians.

The Egyptian government is trying to enact social distancing. Mosques and churches have been shuttered. But it appears that Cairo’s overarching strategy for handling the pandemic is to punish anyone who discusses the dimensions of the outbreak in Egypt.

A week and a half ago, authorities in Cairo stripped the press credentials from a Guardian reporter who published the findings of a study of Egypt’s coronavirus status that had been reported by the Lancet medical journal. The Lancet report claimed that the number of people in Egypt with the coronavirus is far higher than the official data.

At the start of this week, the Egyptian government claimed that Egypt had 286 coronavirus patients and that eight people had died in Egypt from the virus. The Lancet report alleged that more than 19,000 people in Egypt have coronavirus.

Then there is Lebanon. The coronavirus pandemic arrived in Lebanon just as the Hezbollah-controlled government of Prime Minister Hassan Diab defaulted on $1.2 billion in foreign loan payments. In the months that preceded the virus, thousands of protesters had flooded Lebanon’s streets demanding massive constitutional changes.

The pandemic got them off the street. But it also hammered the final nail into the coffin of Lebanese nationalism. The Hezbollah-controlled Health Ministry, and Hezbollah itself, are focusing their resources on treating Shiites. Meanwhile, the Druze, Christian and Sunni militia, as well as political parties, are catering to their constituencies.

Jordan entered the pandemic after having barely survived a profound economic crisis that brought hundreds of thousands of Jordanians into the streets demanding government reform and destabilizing the government. Jordanians from all ethnicities have lost faith in the Hashemite Kingdom which owes its survival to Israeli and US support.

Iraq and Syria are both failed states, engaged in varying levels of civil war. They are run by combinations of warlords, Iranian proxies and Iran. They have no means of contending with normal life, let along with a pandemic.

Then there is Iran. The greatest state sponsor of terrorism and the author of much of the instability and suffering afflicting the region is also the greatest casualty of the coronavirus pandemic. Like Egypt and Lebanon, the crisis befell Iran in the midst of an economic meltdown.

Iran’s economic difficulties aren’t the only reason it cannot contend with the coronavirus. The regime has exhibited total incompetence in managing the outbreak. Although the virus has raged through the country for more than a month, the regime still won’t shut down shrines in Qom, the epicenter of the outbreak.

It is hard to know how Iran and the other states in the region will look when this pandemic has passed. But it is safe to assume that they will be less stable than they were when it first hit.

This returns us to Israel which entered the crisis with a strong economy and an advanced, well-funded and functioning health system.

The coronavirus and the chaos engulfing our neighbors tell us two things. First, we need to preserve and strengthen the bonds that hold us together as a nation. Social solidarity is the vital foundation of all national efforts in times of crisis.

The second lesson is that in a world and region plagued with uncertainty and instability, we must do everything we can in the spheres that we do control to minimize uncertainty and maximize stability.

A week ago, Israel almost lost it all. Last week Israel was on verge of internal unrest and chaos the likes of which we hadn’t seen since the 2005 expulsion of ten thousand Israelis from their homes and communities in Gaza and northern Samaria. Indeed, the social cleavages that emerged since last month’s election foretold an even greater disaster than the crisis we experienced back then.

The fact that three former Israel Defense Forces chiefs of general staff were willing to work in concert with the Joint Arab List placed a question mark over the future of our society and state.

The Joint Arab List is an alliance of parties that rejects Israel’s right to exist. Its members work openly in the Knesset, in the courts and in the international arena to delegitimize the Jewish people’s right to self-determination and to undermine Israel’s ability to defend itself from external attack and internal subversion. Blue and White’s willingness to work with the alliance called into question the Israeli Center-Left’s commitment to the continued existence of the Jewish state.

By abandoning their coalition with the Joint Arab List, Gantz and Ashkenazi prevented large-scale civil unrest which would have been devastating at any time. In the midst of the coronavirus crisis, it would have been disastrous.

But while they recognized the need for social and national solidarity, it is far from clear that Gantz and his colleagues understand the need at this time to introduce certainty and stability into our strategic reality.

With our neighbors all teetering on the edge of the abyss, Israel needs to take bold action to make clear what its red lines are to restore some order to our neighborhood. The first means of drawing these essential lines is by fortifying borders and making clear we will defend them.

Israel’s borders with Egypt and Lebanon, and (thanks to US recognition of Israel’s sovereignty over the Golan Heights), with Syria are clear to all sides. Our neighbors know where the line is located, and they know not to cross it.

To protect itself from chaos to its east Israel must apply its laws to the Jordan Valley and the northern Dead Sea region and follow up the move with mass expansion of its communities and transportation and road infrastructures linking the eastern frontier to the rest of the country.

Gantz and his colleagues claim that to preserve its peace with Jordan, Israel must first receive Jordan’s approval before applying its law to the border. But their concerns are misplaced. Providing Jordan with a veto over Israel’s right to determine its border will empower the most extreme actors in Jordanian society at the expense of the regime’s stability. In contrast, unilateral action on Israel’s part will stabilize its relations with Jordan by dispelling uncertainty about Israel’s intentions.

The same logic holds in relation to the Palestinian Authority in Judea and Samaria.

PA health officials clearly agree. They are following Israel’s lead and seek its guidance in all their efforts to slow and the spread of the virus and care for its victims.

The PA’s willingness to work so closely with Israel owes to their faith in their Israeli counterparts. If the Health Ministry was conveying a sense of confusion and uncertainty about its actions in relation to the pandemic, the Palestinians would reject its authority. This, in turn, would raise the level of uncertainty among Israelis and Palestinians alike and fuel hysteria and chaos.

Gantz and his colleagues reportedly oppose applying Israeli sovereignty to these areas and their opposition is a major stumbling block in coalition talks. Perhaps their opposition stems from their attachment to the Left’s hidebound and false belief that the only way to secure peace is through appeasement. If so, they need to reconsider their views.

The coronavirus, and the failure of the societies and regimes around us, point to the fact we live in an age of uncertainty. In these times, Blue and White’s desire to grant a veto over Israel’s borders to neighbors who are dependent on Israel for their wellbeing on the one hand and falling apart before our eyes on the other does not advance the cause of peace. It removes all possibility of peaceful coexistence. It raises the prospect of war by increasing uncertainty and instability unnecessarily. Israeli sovereignty and strength are the greatest stabilizing forces in the region today. Applying Israeli sovereignty to these areas now is the best way to promote peace and expand stability in our chaotic region.