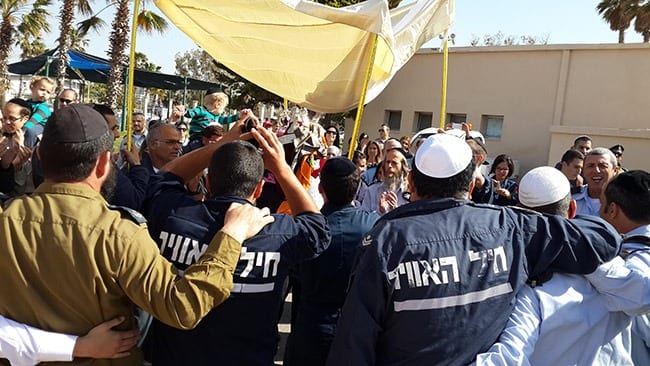 Many people don’t realize that there’s a little-known passage in Samuel 1 where we learn that when a Torah scroll is missing from the nation of Israel, God significantly downgrades his protection of the Jewish people. We learn this from the words of Pinchas’ wife:

The ‘Aron of Hashem’, also known as the Ark of the Covenant, hosts a Torah Scroll inside  of it. And it is that same Torah scroll that the nation of Israel needs to enjoy optimal protection from God.

This phenomenon is compounded several passages later after the Ark of the covenant was finally recovered in a battle with the Philistines. When that happened, God protected the nation of Israel once again as it says:

The Philistines were humbled and did not invade the territory of Yisrael again; and the hand of Hashem was set against the Philistines as long as Shmuel lived. (Samuel 1 7:13)

And the same way this Torah scroll protected the Nation of Israel against it’s enemies in the says of Samuel, one organization is implementing this same principle for IDF soldiers defending the promised land today.

The Israel Soldier Fund (ISF), works to provide every IDF base with a Torah Scroll to protect Israel’s warriors against modern-day Philistines. The organization has over a decade of experience bringing Torah scrolls to IDF bases.

That’s because many people don’t realize that “many IDF bases  don’t have Torah Scrolls, even those with over 5,000 soldiers” explains the organization’s founder, Yosef Bar-David. “And most bases that do have a Torah Scroll, have one that is extremely old and dilapidated making it non-kosher” he adds.

Therefore, Bar-David seeks to supply a kosher Torah Scroll to every IDF base in Israel. But the cost of a Torah Scroll isn’t free. Each one costs him $50,000.

And although he doesn’t expect most people to be able to afford $50,000, he is offering people the opportunity to donate and purchase a letter of the Torah Scroll at the very low price of just $10 per letter.

But anyone who does donate a full Torah scroll will be allowed exclusive access into the IDF base where the Torah scroll was delivered for a tour with their family as well as a certificate of recognition from the IDF. Additionally, donating a Torah scroll is a segulah (a heavenly  protection) for the donator and their family for years to come.

And since we’re in the era of the coronavirus plague, you might find it interesting to know that Jewish legend teaches that to end a plague, one should ‘purchase’ the amount of letters in a Torah Scroll that corresponds to their name.

This actually protected the people in the book of Daniel when they were struck with a plague but anyone whose name was inscribed in the Torah scroll was protected.

“At that time, the great prince, Michael, who stands beside the sons of your people, will appear. It will be a time of trouble, the like of which has never been since the nation came into being. At that time, your people will be rescued, all who are found inscribed in the book. (Daniel 12:1)

Additionally, in 18th century Eastern Europe after the founder of Hassidic Jewry, the Baal Shem-Tov, instructed his community to do just that. When they listened, the plague ended.

And if you donate the amount of letters in correspondence with your name, it could protect you and your family against Coronavirus.

But to do that, you need to make a donation and purchase those letters through the ISF.

Doing so can kill two birds with one stone. Protect yourself from coronavirus and protect Israel against its enemies.

So what are you waiting for? Donate to this spiritually vital organization today.