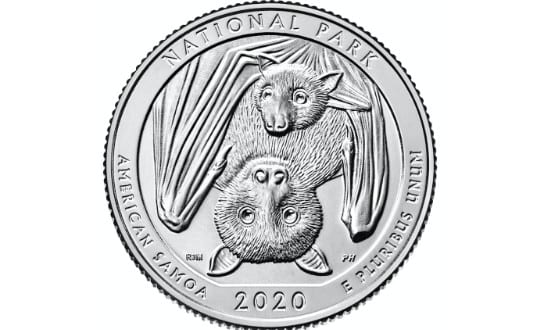 A new quarter minted by the U.S. Treasury features an image that was benign several years ago when the coin was designed, But in our current coronavirus reality, the coin precisely evokes Isaiah’s inexplicable end-of-days imagery.

A ceremony on the island nation of Samoa took place on February 13, as the coronavirus was raging around the world. Held in the National Park of American Samoa in Utulei, American Samoa. The ceremony celebrated the minting of a new U.S. quarter featuring, of all things, a bat.

As part of its America the Beautiful Quarters Program that launched in 2010, the U.S. Mint releases five new quarter designs per year, each depicting national parks and sites. The National Park of American Samoa Quarter looks normal at first glance. The obverse (heads) design features the familiar image of George Washington by John Flanagan, used on the quarter since 1932. It has been restored to bring out subtle details and the beauty of the original.

The flip-side features a Samoan fruit bat mother hanging in a tree with her pup. The design is intended to promote awareness to the species’ threatened status due to habitat loss and commercial hunting. The National Park of American Samoa is the only park in the United States that is home to the Samoan fruit bat. Located 2,600 miles southwest of Hawaii, it is one of the most remote parks in the US National Park System.

The star of the new quarter is Pteropus samoensis (pe’a vao), commonly known as the Samoan fruit bat. It is presently found only in the Samoan Archipelago and Fiji. These mega-bats are huge, with a wing span up to 3 feet wide.

This is the first time a bat has been featured on a U.S. coin.

2020 is off to a rough start but things will turn around in February when the bat quarters come out https://t.co/Hu8As4Q4je pic.twitter.com/rPMHfVL5Ik

Of course, the new coin was conceived well in advance of its minting when the bat did not symbolize the origin of the pandemic currently ravaging mankind. Like many aspects of the coronavirus, its origins in the consumption of bats acquired at the Wuhan Wet Market in China are still subject of controversy and debate.

But what cannot be debated is the reference by the Prophet Isaiah connecting bats to an end-of-days catastrophe that sends men scurrying into underground isolation.

And men shall enter caverns in the rock And hollows in the ground— Before the terror of Hashem And His dread majesty, When He comes forth to overawe the earth. Isaiah 2:19

The connection comes when men dedicate their gold and silver to bats.

On that day, men shall fling away, To the flying foxes and the bats, The idols of silver And the idols of gold Which they made for worshiping. Isaiah 2:20

Rabbi Yosef Berger, the rabbi of King David’s Tomb on Mount Zion, stated that this verse was precisely referring to what is happening today.

“Even before the U.S. knew what they were doing, God caused the government to plan this coin precisely according to the prophecy, to be minted precisely at the time that men would begin entering their homes in quarantine.,” Rabbi Berger said. “All of the world’s economy has been sacrificed to this disease brought on by bats. In a logical world, how could a lowly bat bring down the world’s economy? We are seeing right now that when a tiny bat is wielded by Hashem (God, literally ‘the name’), He can bring about the greatest prophecies.”

“Money and materialism was the cause for so many to leave God, to leave even their families for work,  to self-enslave. Now, the symbol of their downfall is staring them in their faces on the money that they worked so hard to acquire. The government dedicated their new money to the bat, the means of their downfall and the source of the disease.”

“Never before in history has all of mankind entered their homes like this. There is nothing to do with your money while you are hiding in your home. And money has no influence in the final judgement.”

The rabbi cited a verse in Proverbs stating what he believes is the cure.

Wealth is of no avail on the day of wrath, But charity saves from death. Proverbs 11:4

“Sitting in our houses, we feel intensely how we need to be interconnected. Without it, the greatest economy is nothing. We are all connected to each other through the Creator.”

The rabbi cited a verse from the Prophet Zechariah describing the days after Messiah.

And Hashem shall be king over all the earth; in that day there shall be one Hashem with one name. Zechariah 14:9

The rabbi noted the following verse which described what that unified reality would bring about.

Never again shall destruction be decreed, and Yerushalayim shall dwell secure. Zechariah 14:11