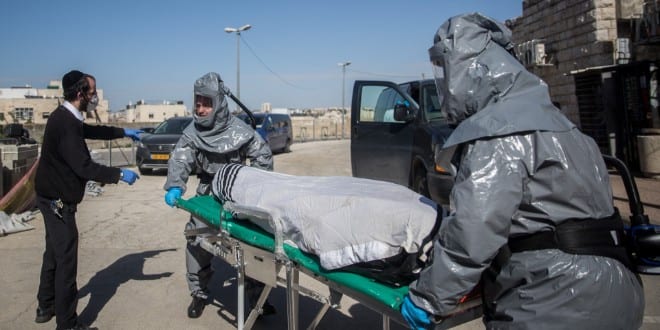 As of this writing, Israel’s infection rate has not flattened, and the government ponders yet more restrictive measures to prevent continued spreading of the Coronavirus.

While Israel did get out ahead of the virus and its response has been a model for some, it continues to deal with the spreading of the virus like the rest of the world.  As of this writing there are over 4800 who have tested positive, dozens in severe condition, and 18 deaths from Coronavirus. Out of a population of just over 9 million, we’re no better off than many, and no worse either.  Yet the consequences in Israel are unique.

With global travel virtually stopped and Israel being a tourist and pilgrimage site for millions, the economy has been hit hard.  From an unusually strong and stable economy with very low unemployment, nearly 1,000,000 have filed for unemployment, skyrocketing to over 22% nationally.  The negative trickle down has been devastating. In an unprecedented move El Al, Israel’s national airline, has suspended all commercial flights. El Al has only ceased flying for more than one day twice in its history: in the 1970’s they had a lengthy strike, and on 9/11 all flights were grounded for three days. El Al was one of the first to start massive layoffs in February.  Now, all but a relative handful of their 6300 employees are impacted.

One “bright side” is that with plenty of “room at the Inn,” Israel has contracted with the national Dan Hotels to take over entire properties in which to house those infected but not (yet) in serious condition.

The economic impact is being felt all the more here because of the start of Passover next week. We empty our homes of all leavened products, and prepare for what’s meant to be a joyous Seder meal celebrating our redemption. This comes with a high cost, as prices spike for food and other seasonal products to enhance our festivity. This year, extended families will be split up and not able to celebrate together with a hyper-concern about infecting grandparents and others who are at a higher risk of complications and death.

Passover is not just a religious holiday, it’s a national one. In normal years, most Israelis are on vacation, with many traveling overseas.  Not this year. Compounding this, for those who stay in Israel, roads are typically packed with people crisscrossing the country, visiting loved ones and packing national parks. Not this year. We need to stay home.

It’s ironic that on the eve of Passover, we are more or less stuck in our houses, not unlike the situation in which we found ourselves waiting out the isolation of another deadly Biblical plague thousands of years ago. Then, we had the protective covering of shmearing some blood on our doorposts. Let’s pray that with this holiday of national liberation, this season we will see a similar protection and reversal of and redemption from the plague of darkness and death in which we all find ourselves.

Israel always has to carefully guard its borders. That’s normal.  We’ve never had to essentially seal off from the rest of the world before. Now, in addition to concerns about threats from our neighbors, Israel is struggling with the “need” to help our neighbors in the Palestinian Authority, and particularly in Gaza. It’s well known that Israel coordinates with the Palestinian Authority on many things including security, trade, water, energy, health, and other things, on a regular basis. That’s often met with criticism among Palestinian Arabs who think that just by virtue of coordinating with Israel on these essential things, it “legitimizes” Israel’s existence.

Now, because of the crisis, there’s a sense that the Palestinian Authority coordinating with Israel may not be so bad, even praised by unlikely sources such as the UN.  While unconfirmed, reports of the Palestinian Authority receiving 10,000 testing kits at the same time Israel’s Mossad coordinated the delivery of hundreds of thousands more suggest that Israel had a hand in providing these as well. Some even suggest that it’s Israel’s responsibility to help Palestinian Arabs living in their own communities, who are not Israeli citizens. The flip flop is interesting. Maybe this will lead to a normalization of relations when the Coronavirus threat ends, though I am not holding my breath. The plague of Jew-hatred with which they are infected has no known cure.

There’s also a debate in Israel as to what ends we should be of help among our Palestinian Arab neighbors.  Many feel that coordination among health and security authorities makes sense and is good for us all. Few have problems with Israel facilitating the delivery of medical equipment and the like. Many balk, however, about Israel taking on responsibility in the form of providing from its own limited resources as we prepare for the situation to get worse before it gets better.  Some resent the idea that the Hamas and PLO terrorists who control Gaza and the “West Bank” respectively, have spent billions to build terror tunnels and amass weapons to attack and kill us rather than investing in the health, well-being and infrastructure for their own people.

Now they are looking to us for help. What about the rest of the Arab and Islamic world that are happy to give them money to fight us, yet not invest in building their society? Inevitably however, no matter what we provide, we will be criticized for it being too little, too late, or Coronavirus being a Zionist plot.

Regarding supplies and medical equipment, whether in the context of providing these to our neighbors or just for our own domestic needs, one area that Israel has a unique need and challenge is the number of respirators we have. Other than hospital beds, testing kits, protective gear and the like, respirators are a particular concern. According to Jewish law, preserving life is the highest value. One cannot shut off or disconnect a patient from a respirator, even if there is no medical hope that the person has any chance to live on his/her own.

Therefore, there are more people who are on respirators indefinitely, and fewer respirators “turning over” for others as would be in a society that does not hold this standard of protecting lives, whether for medical, religious, or ethical reasons.

Israel’s situation is bad, just like everywhere. I pray at this season of redemption that we will all cross the desert and see the threats facing us today, behind us sooner than later.