Israel and the Demise of the Global Village

Home » Israel and the Demise of the Global Village 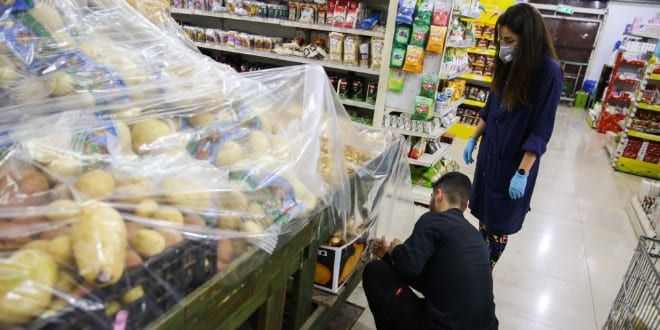 In the face of the steeply rising number of coronavirus patients and the breakneck speed of political changes in Israel, few people have stopped to notice that the world we have grown accustomed to living in for the past generation is falling apart. The global village is collapsing under the weight of the pandemic.

How Israel deals with this dramatic turn of events today, and in the coming weeks, months and years will determine both how we emerge from the present crisis and how we manage in the new world now taking form.

Israel’s food supply system is a perfect example of the global changes to being wrought by the virus. In Israel, five basic foodstuffs are produced locally: fruits, vegetables, eggs, poultry and milk. Most grains, sugar, rice, salt, meat and other foodstuffs are imported.

Out of a total agricultural workforce of 70,000, 25,000 are migrant workers from Thailand and another 25,000 are from the Palestinian Authority. According to Agriculture Minister Tzachi Hanegbi, concerns over the coronavirus prevented 1,500 workers from Thailand scheduled to arrive at the beginning of the month from entering the country. The Palestinian workforce is down to 18,000 and dropping due to the quarantine the PA has placed on its population.

The labor shortages couldn’t come at a worse time. Currently there are a half billion shekels worth of fruit and vegetables ready for harvest. If they aren’t picked in the next three weeks, they will rot on the trees and in the fields.

Three weeks ago, the HaShomer HaHadash organization began getting flooded with calls from farmers for help. HaShomer HaHadash is a volunteer agricultural support organization founded in 2007 to protect Israeli farmers from Arab and Bedouin criminal gangs who extort farmers and ranchers and carry out agricultural theft and sabotage on a massive level.

“These calls were different,” explains HaShomer HaHadash’s leader Yoel Zilberman. “We are used to receiving calls about sabotage, and extortion and sending our volunteers to guard and herd. These calls were about the harvest, the national food supply.”

Zilberman and his colleagues realized the implications of the loss of a harvest for Israel’s food supply and began drawing up a plan to help the distressed farmers. Two weeks ago, Zilberman approached Hanegbi and offered to organize a corps of volunteers to save the harvest. Comprised of the organization’s roster of volunteers, cadets at pre-military leadership academies, youth movement alumni and from twelfth graders, Zilberman’s volunteers would work in shifts in the fields. With government finance, Hashomer Hahadash would provide for all their needs. Hanegbi agreed.

Last week, the government approved an emergency order to organize the corps of volunteers. The first hundred young people arrived in the fields on Tuesday. Operating in compliance with Health Ministry guidelines, HaShomer HaHadash launched a smartphone application called “Sundo” where prospective volunteers can join the operation. Zilberman plans to expand his roll of volunteers to include foreign students stranded in Israel with nothing to do after the coronavirus caused their programs to be cancelled. He assesses there are up to twenty thousand foreign youth in Israel who could potentially join in the effort.

To be sure, this initiative, which will hopefully enable Israel to surmount the coronavirus-induced international labor shortage, is intended to be a short-term fix. All parties to the initiative assume that once the crisis abates, labor flows will return to their pre-coronavirus levels. But there is no way to know whether this assessment is correct. The coronavirus-induced shortage in migrant, agricultural laborers points to a much wider phenomenon that is unlikely to disappear when the quarantines are over.

The coronavirus pandemic won’t destroy global markets. But it will change them radically and reduce their size and scope. In the case of agriculture, the coronavirus has exposed large-scale vulnerabilities in both agricultural import models and domestic production. At the outset of the crisis, cargo ships laden with foodstuffs from China and Italy were laid up in the ports for weeks until port workers and the Health Ministry could develop protocols for safely offloading them. Dozens of shipments were diverted to Cyprus, at great cost to importers.

Who is to say that food supplies in China or other countries won’t be compromised again in the future? And what happens in the event of war? Naval warfare can easily endanger food imports to Israel over a prolonged period. The model of dependence on foreign suppliers needs to be adapted in the face of what we are learning.

As to domestic production, according to Hanegbi, over the past decade, the number of Israelis engaged in agriculture has decreased by 60 percent as the children of farmers are choosing other professions. Obviously, this is a major vulnerability. Israel needs food security and food security means expanding our domestic agricultural capacity. The incoming government needs to develop a national plan to support domestic agriculture and inspire young people to choose agriculture as a profession and way of life. In Israel, the next crisis is always just around the corner. And the next war or pandemic may make our current endangered harvest look like child’s play.

What is true in relation to agriculture is doubly true in relation to manufacturing. As we are finding in our race to purchase more respirators, it is ill-advised in the extreme to depend on foreign suppliers for food, medical equipment and medicines in times of crisis. Until January 2020, it seemed perfectly rational to outsource manufacturing to China. Now, as we face global shortages in respirators and other medial equipment, it is obvious that China is not a trustworthy supplier.

This week Jim Geraghty published a timeline of China’s deception of the world regarding the nature of the coronavirus in National Review. Geraghty showed that Chinese authorities in Wuhan realized the virus was spread between humans in the first week of December. But it wasn’t until January 20 that the Chinese admitted that this was the case.

In the intervening six weeks, the Chinese lied repeatedly about the infectiousness of the virus and jailed doctors and citizen journalists who tried to warn the Chinese people and the world of the danger. Also during those six weeks, five million people left Wuhan. Scores of thousands of them got on airplanes and flew to Europe and the U.S. bringing the virus with them.

Still today, the Chinese are apparently hiding critical information about the virus from the world. While the Western media heralds the Chinese success in bringing the infection rate down to zero inside China, Japan’s Kyodo News Agency reported this week that the Chinese data are phony. Physicians in Wuhan told the agency’s reporters that the reason the rate of infection has dropped to zero is because Chinese authorities have banned testing.

The coronavirus exposed a truth that global village fans have spent the past generation denying: Borders are important.

From 1997 until the coronavirus, Europe’s internal national borders were all open. Over the past few weeks, 15 EU member states have shut their doors and thrown away the key. Germany – birthplace of the vision of the European common market and nation – initially banned the export of protective medical equipment to its European “brethren.”

When the Italians begged for help, no EU member state sent in medical teams to save their fellow Europeans.

If just last month, the heads of the European Commission had the last word in all discussions among EU member states, today no one cares what they have to say. As Professor Thomas Jaeger from the University of Cologne told the Los Angeles Times, “We’re seeing an enormous delegitimation of the authority of the EU government in this crisis. The longer the crisis lasts, the more nationalism will return.”

In many ways, regardless of how long it lasts, the pandemic has already taken a permanent toll on the EU. EU members have taken one another’s measure and realized that when push comes to shove, they have only their own peoples and governments to rely on. The Italians and Spaniards aren’t likely to care what the feckless bureaucrats in Brussels, or the selfish Germans have to say about their national policies after this is over.

The same goes for the UN and other major international governing institutions.

UN Ambassador Danny Danon wrote Wednesday in Israel Hayom that this is the UN’s finest hour. In his words, “UN institutions, particularly the World Health Organization, are proving that the organization remains the main body that the world needs in its struggle with Corona.”

Danon is mistaken, however. The WHO has played an unhelpful, indeed destructive role in this crisis. As Geraghty and others have shown, the WHO was a full partner in China’s dissimulation efforts. The WHO waited until January 21, after the first coronavirus patient was diagnosed in the U.S., to admit that it is transferred between people despite the fact that WHO officials knew that humans infected one another in early January. This week an Oxford-based research group announced it will no longer base its coronavirus assessments on WHO data, which it considers not credible.

This week Walter Russell Mead noted in the Wall Street Journal that international organizations like the World Bank, the International Monetary Fund and the Word Trade Organization are playing no significant role in the global fight against the coronavirus.  National leaders and agencies, who are directly responsible for protecting their people are calling the shots irrespective of WHO rules and IMF spending guidelines.

The coronavirus pandemic has exposed the critical failings of the global village model for international integration. International labor markets, global trade and international governing institutions have proven vulnerable to shocks, unreliable and of limited use. It has also reminded us of foundational truths that have been shunted aside since the end of the Cold War. National borders protect nations. National authorities, and fellow citizens are far more reliable and helpful in times of crisis than transnational, and international organizations.

To survive and protect themselves from global shocks, nations must have autarkic agricultural and manufacturing capabilities. China is not a reliable industrial base.