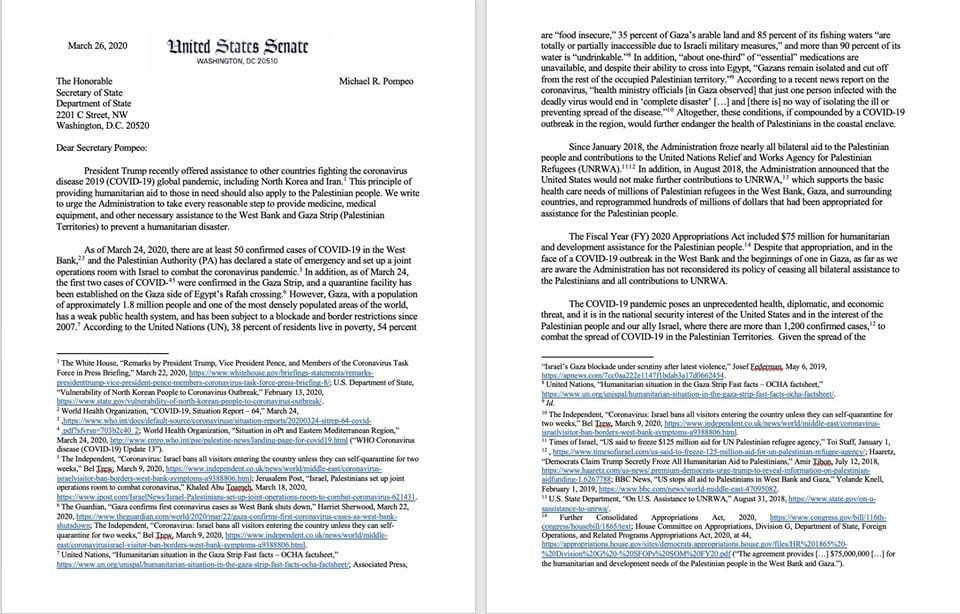 A group of Democratic senators called for the U.S. State Department to reverse its policy and give funding to the Palestinian Authority and Hamas.

“Given the spread of the coronavirus in the West Bank and Gaza, the extreme vulnerability of the health system in Gaza, and the continued withholding of U.S. aid to the Palestinian people, we are concerned that the Administration is failing to take every reasonable step to help combat this public health emergency in the Palestinian Territories,” the letter read.

The Democratic politicians seek to squeeze $75 million in aid to the Hamas-led government in Gaza and the PA in Judea and Samaria under the guise of the FY 2020 Appropriations Act.

It should be noted that President Trump slashed funding to the PA in 2018 as per the Taylor Force Act, also known as the Anti-Terrorism Clarification Act (ATCA), that cuts some aid to the Palestinians until they end stipends to terrorists and the families of slain attackers.

In 2016, the PA paid out about $303 million in stipends and other benefits to the families of so-called “martyrs”. The funds are disbursed by the Palestinian Liberation Organization (PLO/Fatah). The families of convicted Palestinians serving time in Israeli prisons receive $3,000 or higher per month, higher than the average Palestinian wage.

Any monies that go to Gaza must necessarily go through the government which is run by Hamas. Hamas, recognized by the U.S. as a terrorist organization, was elected as the ruling party in Gaza in 2006. Gaza receives billions of dollars of humanitarian aid, much of which is usurped by the Hamas government for use in terrorist infrastructures.

Sanders is running for the Democratic nomination to run for president in November. His support of the move is consistent with his campaign platform. In October,  he said that part of the annual US military assistance should be used to “leverage Israel to fundamentally change [its] relationship to the people of Gaza,” with some of the aid being immediately diverted.