Major Rabbis Agree: ‘Gog and Magog can Come in the Form of a Virus’

Home » Major Rabbis Agree: ‘Gog and Magog can Come in the Form of a Virus’ 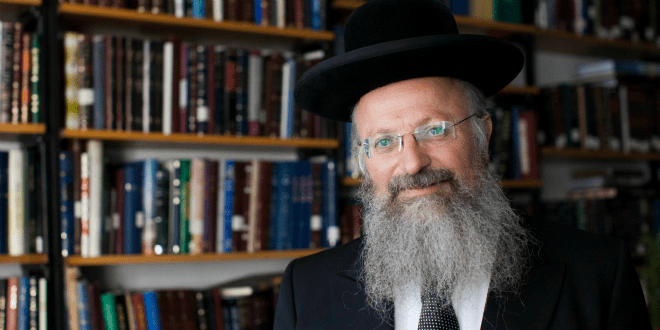 In the simplest possible terms, the Rishon Le’Tzion, the Chief Sephardi Rabbi, said that God will enter the pre-Messiah War of Gog and Magog by wielding a pandemic as a weapon. In other words, the Coronavirus can be an indication that we are currently embroiled in the War of Gog and Magog.

This concept of God wielding a pandemic as a weapon was discussed last week in a lecture by Rabbi Shmuel Eliyahu, the Chief Rabbi of Tzfat. The rabbi cited his father, Rabbi Mordechai Eliyahu, the former Chief Sephardi Rabbi, who passed away almost ten years ago. More than ten years ago, Rabbi Mordechai Eliyahu noted that the plagues of Egypt will return and precede the Messiah in the end of days.

“But the plagues before Messiah will be even worse. God will throw some virus on them,” Rabbi Mordechai Eliyahu said. “But the nations who came up against Israel will say, ‘But it is written in your Torah that our end will come by way of a war!’ But that is the way it will be, that God will deal with the nations and pave the way for Messiah.”

“The words of a wise man are greater than those of a prophet,” Rabbi Shmuel Eliyahu said in his lecture last week, referring to his father’s statement. “When we see such a pandemic or a plague, we shouldn’t think that this was by chance, god forbid, or just something that fell down from the sky.”

Rabbi Eliyahu cited the Prophet Zechariah as predicting such a disease.

This virus is part of the final war,” Rabbi Eliyahu stated unequivocally in reference to Gog and Magog“.  “This will especially hit nations who boycotted or caused Israel to suffer, who tried to stop the settling of Israel, or put IDF soldiers on trial” Rabbi Eliyahu emphasized, noting that this is especially true of Iran.

Rabbi Eliyahu emphasized that harsh prophecies do not have to materialize precisely as predicted.

“Repentance can sweeten the worst judgement,” he said.

Rabbi Eliyahu cited a Jewish tradition that the Angel of Death gave the secret of stopping a pandemic to Moses which he used to stop the plague that befell Israel after the sin of Korach.

Then Moshe said to Aharon, “Take the fire pan, and put on it fire from the mizbayach. Add incense and take it quickly to the community and make expiation for them. For wrath has gone forth from Hashem: the plague has begun!” Numbers 17:11

Jews have a tradition of reciting pitum ketoret, a prayer describing the composition of the Temple incense, as a means of dispelling epidemics. This prayer is currently being recited intensively by Jews on the Temple Mount.

WAR OF GOG AND MAGOG: WAR AND DISEASE

The concept of an epidemic as a pre-Gog and Magog divine plague is mentioned in other sources as well. Rabbi Lazer Brody cited the commentary on the Midrash Psikta, a collection of midrash composed around 845 CE, from the weekly Torah portion of Parshat Beha’alotcha (Numbers 8:1–12:16).

When you are at war in your land against an aggressor who attacks you, you shall sound short blasts on the trumpets, that you may be remembered before Hashem your God and be delivered from your enemies. Numbers 10:9

The midrash asks which war is it that Israel will be saved and there will be no enslavement afterwards.

“The only war like this is Gog and Magog,” the midrash answers, citing the Prophet Zechariah.

Then Hashem will come forth and make war on those nations as He is wont to make war on a day of battle. Zechariah 14:3

The midrash goes on to say that the War of Gog and Magog will include blight and rotting and women will have difficulty giving birth.

Rabbi Brody cited a book by Rabbi Naftali Tzvi Yehudah Berlin, a 19th century Torah scholar from the city of Volozhin in the Minsk Region of Belarusalso known as the Netziv of Volozhin. In his commentary on this, The Netziv of Voloshin states that “God will go out and fight the other nations in the pre-Messiah war of Gog and Magog by way of a plague.”

It is explained in the commentaries that the Netziv’s does not mean to say that there will not be a war at all. His intention is that the war will also be fought by natural catastrophes to a degree never seen before, and that one of these will be a plague of disease.