A Mt. Everest Sized Asteroid is About to Whiz by Earth: Part of ‘Nibiru’ Explains Expert

Home » A Mt. Everest Sized Asteroid is About to Whiz by Earth: Part of ‘Nibiru’ Explains Expert 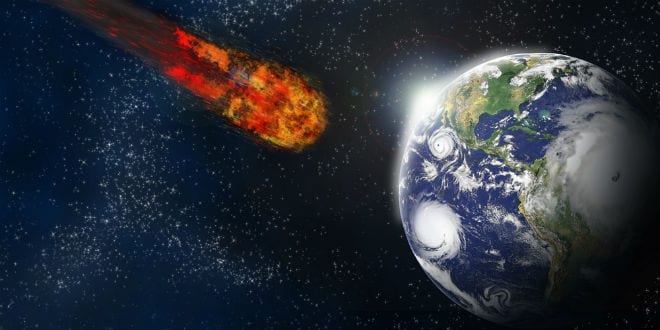 NASA is currently tracking an asteroid 2.5 miles across a rock that is roughly half the size of Mount Everest, which will make a relatively close pass to the Earth at 19,461 miles per hour at the end of next month. Classified a Near-Earth Object (NEO), Asteroid (52768) 1998 OR2 is currently curving around the sun and will approach within four million miles, or about 16 times the Earth-moon distance, on April 28 on what is officially labeled an “Earth close approach.” The largest asteroid astronomers expect to approach the Earth this year, NASA warned that it is “large enough to cause global effects if [it] impacted Earth.”

Observers armed with simple telescopes should be able to see OR2 at its nearest point. The Virtual Telescope Project in Rome will host a free, online public viewing of the asteroid on April 28, 2020.

NASA discovers roughly 30 NEOs every week but does not catch sight of all the rocks floating around above our heads. In July 2019, an asteroid estimated to be  400 feet in diameter named 2019 OK passed within 43,500 miles of Earth traveling at a speed of 15 miles a second. Scientists did not detect it until it was quite close because its trajectory was directly from the sun towards Earth.

“It would have hit with over 30 times the energy of the atomic blast at Hiroshima,” Alan Duffy, a Swinburne University astronomy, told the Washington Post. “It’s a city-killer asteroid. But because it’s so small, it’s incredibly hard to see until right at the last minute.”

Sometimes undetected asteroids are far more dangerous. In 2013, an asteroid about 60 feet across entered the atmosphere at an estimated 40,000 mph, exploding over Chelyabinsk, Russia with a blast yield of 400–500 kilotons of TNT. This is approximately 30 times as much energy as that released from the atomic bomb detonated at Hiroshima. The light from the meteor was brighter than the Sun, visible up to 62 miles away. Some eyewitnesses also felt intense heat from the fireball. About 1,500 people were injured seriously enough to seek medical treatment. All of the injuries were due to indirect effects rather than the meteor itself, mainly from broken glass from windows that were blown in when the shock wave arrived. Some 7,200 buildings were damaged by the explosion’s shock wave. No warning was given of the asteroid’s approach.

Asteroid strikes of this magnitude are estimated to occur once or twice a century.

“Impacts of larger objects are expected to be far less frequent (on the scale of centuries to millennia),” NASA said in a statement. “However, given the current incompleteness of the NEO catalog, an unpredicted impact – such as the Chelyabinsk event – could occur at any time.”

Scientists believe the last globally catastrophic meteor impact took place  66 million years when an asteroid 2-5 times larger than OR2 wiped out the dinosaurs.

NASA lists and tracks NEOs via their automated Sentry System and despite the long odds, the organization is running a test of an asteroid defense system next year. DART, which stands for Double Asteroid Redirection Test, is a planetary defense test to prevent an asteroid from hitting Earth. DART, which has a launch window opening in July 2021, will visit a binary asteroid system where two asteroids orbit one another and aim to deflect a small asteroid. DART will crash into a moonlet (a small natural satellite) of near-Earth asteroid Didymos, that is comparable in size to an asteroid that could pose a threat. The European Space Agency’s complementary Hera mission will precisely measure how it changed the velocity of the larger asteroid and study DART’s impact crater on the moonlet.

Yuval Ovadia, whose films on Nibiru have garnered hundreds of thousands of views, stated simply, that all of the events described in Biblical prophecy are suddenly appearing at a dizzying rate.

“Everything is connected and everything was expected by the prophets,” Ovadia said to Breaking Israel News. “Some people believe in the Bible and operate on a faith-based agenda but others go against that and try to enforce their own anti-Bible agenda.”

Ovadia referred to Nibiru, a star that will appear in the end of days that will wreak havoc but not destroy the world.

“As Nibiru approaches, more asteroids will appear,” Ovadia said. “Nibiru is described in Jewish sources as a star, not as an asteroid. But as it approaches, it pushes asteroids ahead of it like a ship pushes water in front of it.”

Ovadia noted that these celestial phenomena will be accompanied by other catastrophes; earthquakes, plagues, volcanoes, and even disease. This intensive period will spare no one. He noted that the coronavirus pandemic is spreading panic among the aspects of society that are most insulated from its effects.

Ovadia believes the final series of events culminating in the arrival of the Messiah has already begun.

“But it is important to understand the process properly,” Ovadia said. “First, there will be a shaking up of the world governments, of leadership. We are seeing this all over in politics and also in the super-wealthy hiding themselves away. That is what the ‘corona’, or ‘crown’ virus is doing. God did this in Egypt. The Exodus did not really begin until Pharoah himself died in the splitting of the sea. Running away or hiding in bunkers will not help, just as Pharoah’s chariot didn’t save him.”

“Governments and economic leaders will be replaced by the true Kingdom of God in Jerusalem while these people hide in their holes,” Ovadia said. “After that, Nibiru will arrive. And then, since the governments are in a mess, Gog and Magog.”

“All of this is dependent on the spiritual condition of the people. If we are worthy, the final days will come in kindness. If not, it will be a difficult time indeed.”