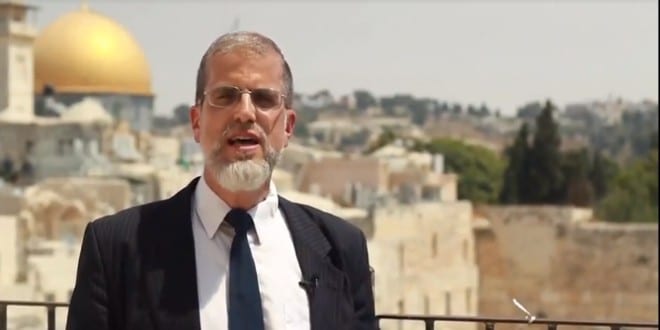 For those visiting Israel, exploring archaeology is a must.

But how many people can honestly say that an ancient ruin was actually the missing piece to a complex puzzle that baffled Bible scholars for years?

This is one of the facets of the teachings of Rabbi Chaim Eisen,founder of Zion Bible Studies. As a prominent Bible scholar who isn’t afraid to teach Christians the Scriptures in its original language (Hebrew) and from a Jewish perspective, Rabbi Eisen also takes his pupils on Biblical tours of the Old City of Jerusalem.

Speaking candidly to Breaking Israel News, Rabbi Eisen explained that there is a big mystery in the Book of Isaiah that was only solved after excavations following the Six-Day-War in Jerusalem.

When that happened, a wall was uncovered in the Jewish Quarter of Jerusalem’s Old City.

So what’s the big deal?

As Rabbi Eisen explains, it was this wall that Isaiah spoke about when he blasted King Hezekiah:

and you constructed a basin between the two walls for the water of the old pool. But you gave no thought to Him who planned it, You took no note of Him who designed it long before. (Isaiah 22:11)

In Hebrew, the word for ‘two walls’ is חֹמֹתַיִם (chomotayim) which appears nowhere else in the Bible. And until this wall was discovered in the aftermath of the ‘Six-Day War, no one knew what ‘walls’ Isaiah was referring to.

But as it turns out, that wall was actually an additional wall that was built by King Hezekiah to protect the city against the imminent Syrian onslaught.

This incredible find settled another unsolved mystery Rabbi Eisen explains. That’s because in the previous passage in Isaiah, the prophet mentions demolished houses:

and you counted the houses of Yerushalayim and pulled houses down to fortify the wall (Isaiah 22:10)

What’s interesting to note is that at the base of King Hezekiah’s recently discovered wall are neighborhoods of demolished houses. As Rabbi Eisen explains, it was these very houses that had to be ruined in order to erect an additional wall to protect Judea against Sancherib’s assault.

This outer wall was discussed in the Book of Chronicles:

He acted with vigor, rebuilding the whole breached wall, raising towers on it, and building another wall outside it. He fortified the Millo of the City of David, and made a great quantity of arms and shields. (Chronicles 2 32:5)

As Rabbi Eisen explains, these homes belonged to the ten Northern tribes. And although it didn’t consist of everyone, it did consist of groups from within those tribes who entered Jerusalem. They fled from Samaria to Jerusalem when Sancherib ransacked the northern region.

There was just one problem

As Rabbi Eisen notes, “Jerusalem was surrounded by mountains. So you can’t just build a wall wherever you want.” He added that Hezekiah’s wall had to coincide with the ridges of the mountains which meant that some houses would have to be destroyed in the process.

In Isaiah 22:10, the prophet indicts King Hezekiah for destroying the homes of the ten Northern tribes on the outskirts of the city saying:

and you counted the houses of Yerushalayim and pulled houses down to fortify the wall (Isaiah 22:10)

In the following verse, Isaiah speaks of a water basin between the two walls.

and you constructed a basin between the two walls for the water of the old pool. But you gave no thought to Him who planned it, You took no note of Him who designed it long before. (Isaiah 22:11)

But the location of this water basin is something that only made sense after Hezekiah’s wall was discovered in Jerusalem. That’s because there was no basin between the eastern and western walls of David’s village. But there is one between the two inner and outer walls (built by Hezekiah) on the western side of David’s Village.

This basin was in reference to Hezekiah’s water tunnel that was discovered in the 19th century. The only two walls that this basin lies between is the outer wall and the inner wall on the western side of David’s Village.

Rabbi Eisen also points out that the Bible isn’t just a history book. Rather, the words of the prophets like Isaiah are meant to teach us how to live. He emphasizes the importance of understanding that “the words of the prophet come from a historical context.” The rabbi added that it helps to “be able to understand what he’s saying in context before he’s saying it to us.”

To book a tour with Rabbi Eisen or to register for his online Zion Bible Studies program, simply go to ZionBibleStudies.org or click here.