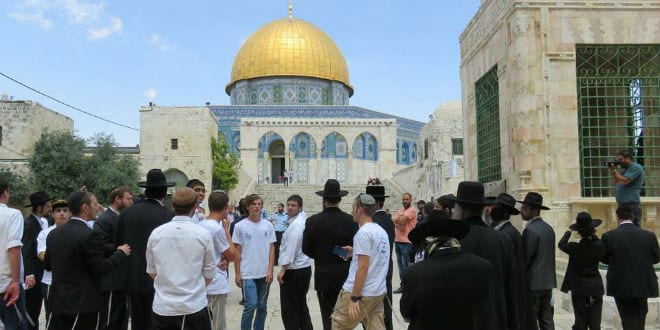 Quoting what he called a “police request,” Rabbi Yosef instructed observant Jews to “avoid visiting the Western Wall and holding mass prayers there. Every man and woman should pray near their homes until the crisis passes and mercy comes from Heaven.”

“Large synagogues will also refrain from holding prayers in large gatherings, but will divide the praying public so as to abide by Health Ministry guidelines,” Yosef wrote.

“The coronavirus can pass from a completely healthy person to someone else and endanger that second person. That means absolute obedience to the instructions [of health officials] is required, even if they are difficult and inconvenient,” he wrote.

“Someone in quarantine or who is at high risk [from the virus] must pray in their home, and try to time their prayer to coincide with the public prayer,” he wrote.

Despite the rabbinic proclamations, the Western Wall Heritage Foundation, which manages the Jerusalem holy site, said earlier this week it would not close it to the public. The Western Wall Plaza will be cordoned off into sections holding no more than 100 people as per the government’s guidelines for public gatherings.

Both rabbis also suggested that weddings and other religious events be held on a  small scale. The rabbis also ruled that the commandment to visit the sick and elderly was also suspended for the duration of the crisis.

“In any case, police restrict Jewish groups to less than 100,” Sanderman pointed out. “Jews are restricted to open areas on the Temple Mount so there is no danger of infection.”

The rise in Jewish visitation to the Temple Mount was not due to the rabbinic prohibition against visiting the Western Wall which is, in fact, the retaining wall for Judaism’s holiest site.

“The world is in a crisis and in times of need, Jews naturally turn to where the Temples once stood,” Sanderman explained. “Though we are still not permitted to gather in prayer, the Jews who ascend of course pray to Hashem (God, literally, ‘the name’) to send a cure to all the people suffering in the world.”

Sanderman noted that many of the Jews who ascended to the Temple Mount recited Pitum Ketoret, the section of the Torah describing the composition of the 11 ingredients of the incense that was used in the Tabernacle and Temples.

“This is known as an aide in times of trouble and disease,” Sanderman explained. “This is especially true on the Temple Mount, which King David acquired to remove the plague that killed 70,000 people.”

And David built there a mizbayach to Hashem and sacrificed burnt offerings and offerings of well-being. Hashem responded to the plea for the land, and the plague against Yisrael was checked. II Samuel 24:25

It should be noted that last Saturday night, Prime Minister Benyamin Netanyahu acknowledged that he had avoided a political deal that could have potentially given him a victory in the election because it would have brought Jewish prayer to the Temple Mount.

“The Bible showed time after time that Jewish service at this site could help in dire situations of plague,” Sanderman noted. “We are trying to recreate this aspect of the Temple as much as possible given the official restrictions. Thi is precisely the Jewish function in the Temple: to act as Kohanim (priests) for the entire world.”

Sanderman emphasized that Jews may only ascend to the Temple Mount after ritual immersion and may not wear leather shoes. In addition, he noted that it is important to obey police instructions while on the site.

Jewish prayer on the Temple Mount was legally mandated in a 2015 Jerusalem magistrate court decision but a clause in the ruling permitted the police to enforce the law based on security considerations. For the last four years, the Israeli police have cited Palestinian Islamic violence as a reason to prevent Jews from praying at the site.

Trump’s recently proposed Deal of the Century puts theTemple Mount under Israeli sovereignty, stating, “People of every faith should be permitted to pray on the Temple Mount/Haram al-Sharif, in a manner that is fully respectful to their religion, taking into account the times of each religion’s prayers and holidays, as well as other religious factors.”