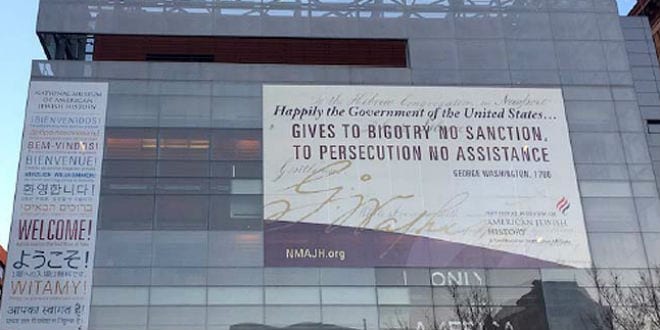 When the National Museum of American Jewish History opened its doors in November 2010, the spanking new $150 million building on Philadelphia’s Independence Mall seemed to be the physical manifestation of all that the prosperous community that built it felt about their place in America’s story.

The building’s edifice literally looks down on the visitor center that houses the Liberty Bell and is positioned across the historic mall from Independence Hall, the birthplace of the American republic. The symbolism was deliberate. The museum is a shrine to both democracy and the success of American Jewry.

So the news that it filed this week for Chapter 11 bankruptcy protection may come as a shock to those who remember the pomp with which it was inaugurated at a ceremony that included, among other celebrities and notables, Vice President Joe Biden.

But to anyone who has closely followed the NMAJH’s struggles, the effort to escape the crushing financial debt under which it continues to labor is no surprise. The campaign to raise the staggering amounts needed to erect the pricey new building and to pay for the collection it amassed to fill it never matched the project’s expenses.

After years of budget cuts and layoffs, the current leadership had no choice but to try to get out from under a $30 million debt to bond-holders and another half million to unsecured creditors. The federal bankruptcy procedure will enable the institution to survive. That’s encouraging for those who look to the museum as a valuable local resource.

The question to be asked is not about the manner in which the NAMJH is to be saved, but about why it’s in this awful predicament. As such, the museum’s plight is an object lesson on the misapplication of scarce Jewish resources and how the vanity of big givers can lead to colossal mistakes for which the community must pay.

The museum was first opened in the bicentennial year of 1976, originally housed in a single room in a building also home to the city’s oldest synagogue, Mikveh Israel. But that modest presentation was insufficiently grand to suit the self-regard of its leaders who dreamed of creating something not merely bigger, but that would also make a statement about American Jewish life.

While the Philadelphia Jewish community is rich in history and institutions that provide a multitude of services, it is also known for its inability to raise philanthropic funds commensurate with the size and wealth of its members. Like all Jewish communities these days, it also struggles to support the vital infrastructure of Jewish life, in particular those elements like day schools, which are essential for ensuring the future imperiled by the demographic implosion of non-Orthodox Jewry.

No rational plan for the future of Jewish life in that city—or anywhere else, for that matter—would have prioritized putting up a massive building and assembling a huge collection of Jewish artifacts while, among other things, quality Jewish education was too expensive for many middle-class families to afford and local Jewish institutions still struggled to survive.

But the leaders of the NMAJH were besotted by the idea that a larger museum would become a centerpiece of Jewish life. In doing so, they were able to play on the fact that charitable donors are naturally attracted to putting up new buildings on which their names will be prominently placed, rather than to the far less glamorous and ego-satisfying task of maintaining existing and far more essential institutions.

During the course of a decade of planning, the new museum with its prestigious new address, became the sexiest Jewish philanthropic cause in the city. Its ambitions, however, outran even the prolific amount of funds raised as the costs of fulfilling its architect’s vision and compiling an extensive collection rose. In the end, the $150 million price tag was offset by massive contributions, in addition to grants from the state and federal governments (the museum is an affiliate of the Smithsonian Institution).

The result is an attractive and interesting museum, albeit one whose basic flaw is a self-satisfied vision of American Jewish achievements that focuses mainly on their ability to fit in, as opposed to what makes their religious and ethnic identity worth preserving, something that I explored in a review essay in Commentary after the opening. The complacent pride in the past and insufficient concern for the future that is the guiding spirit of the museum makes it the perfect metaphor for everything that is wrong with 21st American Jewry.

Even if one accepts that the museum still provides a wonderful learning experience, the scale of its expenses was still way out of proportion to the good it could do.

Unlike the United States Holocaust Memorial Museum in Washington, D.C., the NMAJH wasn’t compelling enough to make it a must-see experience for non-Jewish tourists who flock to Philadelphia for other attractions on Independence Mall. The initial projections of 250,000 visitors in its first year turned out to be more than double the actual amount who walked through its doors. And since then, the situation has not improved.

That meant any notion of the museum being able to pay its own way was a fantasy. Indeed, as I predicted in a January 2008 column published in The Forward, in which I lamented the bad judgment behind its expansion, the museum’s efforts to stay afloat would make it “one more hungry mouth for the community to feed.”

It’s true that the recession of 2008 didn’t help matters. But the NMAJH was always fated to be a white elephant. That was painfully obvious to some of us as it was planned and most of the community’s top Jewish professionals admitted at the time in off-the-record conversations (I was editor of the Jewish Exponent in Philadelphia at the time) that devoting so much energy and funding to the new building was a terrible mistake. Yet they were too intimidated by the museum’s wealthy donors to muster the courage to speak up to try to stop them.

The museum’s fundraising appeals during the heady days of the planning and building stages helped make it harder for other, more important Jewish institutions to raise money. Now as it drowns in red ink, it similarly diverts precious resources away from causes that address the Jewish future in order to pay debts associated with a monument to the past that is too big and too much a source of local pride to be allowed to fail.

Yet the lesson here goes far beyond these specific circumstances.

Museum consultants who prey upon the hubris of large donors act as if there is an infinite amount of money for Jewish needs, and that an extravagance like the NAMJH can easily be afforded. Indeed, in the past few decades, Jewish museums of one sort or another have sprung up around the United States like opera houses in the ghost towns of the Old West. But the truth is that there is a finite amount of resources at American Jewry’s disposal, and if we care about the future, then we must choose how to spend wisely and treat causes essential to building a sense of Jewish peoplehood as our top priority.

Museums are nice things to have, but they are not as important as schools, summer camps, college programs, Hebrew classes and synagogues—let alone providing the social services Jewish communities must also finance. While not all money is fungible, the idea that a museum, even a good one, was the right way to spend $150 million on a Jewish communal cause isn’t so much unwise as it was sheer madness.

As I noted more than a dozen years ago, you have to wonder what history will say about a community that preferred to spend lavishly on a monument to its past rather than doing all it could to ensure its future. That is a question American Jews should be asking themselves as they observe the dismal spectacle of our national history museum heading to bankruptcy court.