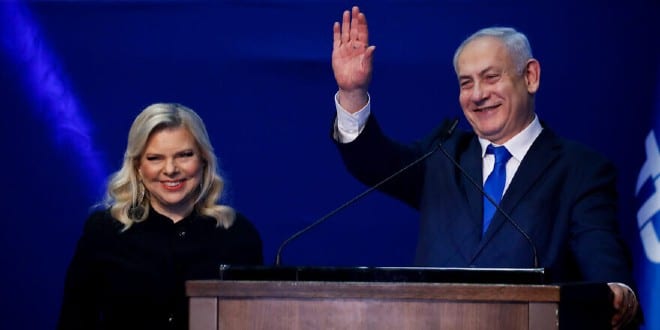 Keeping in mind that the results of Israel’s Knesset elections are not final, the tally indicates that the attempt to oust Prime Minister Benjamin Netanyahu has failed abysmally. It remains to be seen whether his party’s victory on Monday means that his bloc has enough of a majority to form a government. While the initial numbers were encouraging—with Likud outnumbering its key rival, Blue and White by four mandates and the right-wing bloc surpassing the left-wing block by five—throughout Tuesday’s ongoing vote count and verification, the picture continued to fluctuate. By late afternoon, it appeared that Netanyahu’s victory was amazing, but not sufficient.

The significance of this election—the third in less than a year—lies in its elements of surprise. In the first place, voter turnout reached 71 percent, the highest in 21 years.

Despite public whining about “election fatigue” and surveys suggesting that the political deadlock would not be broken, citizens came out in record numbers to cast their ballots. Contrary to descriptions of countrywide malaise, the atmosphere at polling stations was cheerful and energetic. Social media was rife with smiling selfies of voters doing their civic duty, as well as photos of children accompanying their parents in the process.

Even most of the 5,500 Israelis subjected to house quarantine—as a result of possibly being exposed to the coronavirus—showed up at the 16 special tents set up for them across the country. Though they complained of long lines, they appeared to be happy to be out in the world after spending several days stuck in isolation, with only Netflix to keep them company.

Ironically, the coronavirus scare and Health Ministry’s request that Israelis not fly abroad unless absolutely necessary may have been a contributing factor to the high turnout, as many voters who had planned to take a mini-vacation out of the country canceled their trips.

Another shock was the surge in the number of seats garnered by the Joint Arab List, a union of disparate parties—some of whose members are radical Muslims, others far-leftists and most anti-Zionists. These politicians, unlike the bulk of the people they ostensibly represent, seem to care more about the fate of the Palestinians than the daily lives of their own populace.

Three factors caused Arab Israelis to come out to vote in relatively large numbers. One was the effective campaign of party leader Ayman Odeh, whose message to them was a positive one about having a genuine influence on the country in which they make up 20 percent of the population. Another was his warning to them that they were in danger of being disenfranchised by a Zionist legislature that passed the Nation-State Law in July 2018.

A third was U.S. President Donald Trump’s “deal of the century”: the “Peace to Prosperity” plan that gives Israel the green light to annex settlements in Judea, Samaria and the Jordan Valley, and demands that Palestinians recognize the Jewish state and renounce terrorism as prerequisites to statehood and billions of U.S. dollars. The Arab-Israeli leadership was enraged by the plan, which Netanyahu embraced and Blue and White leader Benny Gantz accepted with slight reservations.

The significance of the Joint Arab List not only turning out to be the third-largest party in the Knesset, but gaining two seats since September, is that if the current apparent stalemate—thanks, again, to Yisrael Beiteinu chairman Avigdor Lieberman—leads to a national-unity government between Likud and Blue and White, Odeh will become the head of the opposition. As such, he will be given full access to the most sensitive material relating to Israel’s security and defense. It’s a frightening prospect, considering that his party includes and has defended Heba Yazbak, a Knesset member who lauded Lebanese terrorist Samir Kuntar as a “martyr.” In 1979, Kuntar participated in the cold-blooded killing of an Israeli family in Nahariya.

It is important to note that thousands of Jewish Israeli leftists voted for this party. That’s what happens when your ideology is no longer relevant in a society that has come to its senses about war, peace and economics; you have little choice but to side with the Communists and Islamists in another sector.

Which brings us to the importance of the election results, and the reason that Netanyahu and his supporters were celebrating on Monday night with confetti and all.

This election constituted a defeat of the “anybody but Bibi” hysteria. It represented a win for the sane center-right that believes in Netanyahu’s handling of domestic and foreign affairs, and strongly opposes the tyranny of the courts. It also illustrated that Israelis care about ideas and actions, and that they are not as swayed by empty slogans and outrageous assertions as certain politicians seem to imagine.

Take Gantz, for example, who has spent his campaign trying to out-Bibi on the one hand and accuse him—appallingly—of behaving like Turkish President Recep Tayyip Erdoğan on the other. You know, the same Erdoğan who jails anyone who disagrees with him, including judges, lawyers, academics and more journalists than any other autocrat or dictator in the world.

As all Israelis know, the only person in danger of getting locked up for his political views is Netanyahu himself. But never mind; the fact that he dares to criticize the police and Supreme Court is enough to stick him with the egregious label.

The good news is that Netanyahu is still Israel’s prime minister and likely to remain so in the foreseeable future. The bad news is that the makeup of the next government, if one is established without the need for a fourth election, could take weeks and be less than satisfactory to an electorate eager to move on.