Hamas Fails to Curb Palestinian Islamic Jihad, which has no Interest in Stabilizing Gaza

Home » Hamas Fails to Curb Palestinian Islamic Jihad, which has no Interest in Stabilizing Gaza 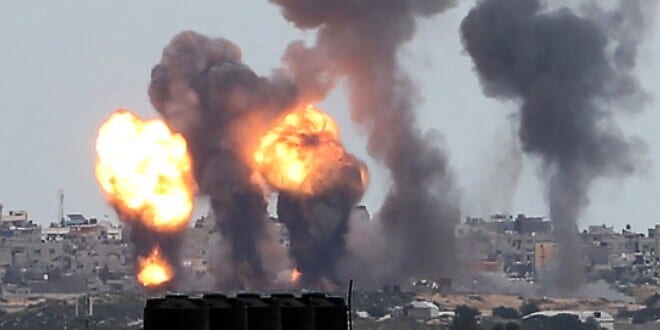 For months, the Israeli government has pursued the objective of trying to stabilize the Gaza Strip. It tried to reach new truce understandings with Hamas through indirect negotiations—brokered by the Egyptians and others—and avoid a new war.

But the latest incidents show that the goal of stabilizing Gaza is growing increasingly distant by the day.

On Sunday, Palestinian Islamic Jihad attempted to carry out a border bomb attack, which was foiled successfully by the Israel Defense Forces, when they shot dead the terrorist as he planted the bomb. Outrage spread throughout Gaza when video emerged of an IDF bulldozer removing the assailant’s body from the scene. As a result, some 30 rockets were fired at Israel on Sunday, half of which were intercepted by the Iron Dome and the rest landing in open fields.

On Monday, the IDF launched a series of airstrikes against PIJ after the terror group fired at least 14 rockets against Israel. The border bomb attack and rocket fire are just the latest signs of how untenable the Gazan situation is becoming.

There are a few reasons for this. First among them is the fact that Hamas—Gaza’s ruling regime and its largest terrorist army—is unable or unwilling to constrain PIJ, the second-largest armed faction.

Hamas has, over the past year, tried to avoid war. According to a person familiar with the issue, Hamas leader Yahya Sinwar has prioritized the goal of improving the economic and humanitarian situation for Gazans. Sinwar has done this not because Hamas abandoned its radical long-term ideology of destroying Israel or its efforts to set up waves of terror attacks from the West Bank, but because he concluded that a war at this time would threaten his own regime. He also concluded that a continued economic deterioration among Gazans would pose big risks to Hamas’s control of the Strip.

So Sinwar turned to temporary pragmatism. He remains interested in the option of reaching understandings with Israel and hopes such steps will improve Gaza’s economy, leading to developments such as the construction of new factories to create jobs, letting more Gazan traders into Israel, and finding solutions for Gaza’s dire energy and water needs.

There is no doubt that Sinwar is strong in the Strip, as are members of the Hamas military wing group that surround him. Yet the Hamas leadership still lacks the power to force PIJ to line up with the efforts to reach a truce.

PIJ is still attempting to destroy the chances of achieving a ceasefire, and Hamas cannot stop it. This is due to the simple reason that doing so would undercut Hamas’s ethos as a jihadist Islamist movement and call into question its ideological commitment to conflict with Israel.

Israel has been trying to isolate PIJ and keep Hamas out of fighting. This is why it conducted an ultra-accurate missile strike when it killed PIJ commander Baha Abu-al Ata on Nov. 14, 2019, after he ignored multiple Israeli warnings to cease and desist from the rocket, anti-tank missile and bombing attacks that he was conducting against Israelis.

The missile killed al-Ata and his wife, but not his children, who were in another room in a Gazan apartment building. Hamas was able to stay out of the two days of fighting that followed, just as Israel had intended.

The hope in Israel was that after that operation, conditions would emerge that would enable Israel and Hamas to reach longer-term understandings. But then, new developments kept coming. The U.S. killing of the Iranian Quds Force commander Qassem Soleimani caused PIJ to up its attacks from Gaza in solidarity.

Then, in late January, the Trump administration unveiled its Mideast peace plan, and this caused Hamas to feel like it “had to do something” in response to signal its rejection. These factors have all decreased the chances of an Israeli–Hamas long-term truce.

Last week, a PIJ sniper cell targeted IDF troops, who returned fire. PIJ is back to its old patterns, trying to spark instability every day.

Meanwhile, Hamas has yet to decide on its identity. Is it a civilian political regime? A terror faction? A military force? A national movement? Or a fundamentalist radical ideology? Hamas keeps trying to say “yes” to all of the above; this merely adds to the instability of Gaza.

Hamas has not done enough to convince Israel that it is even able to uphold a truce, or that it would not use commodities going into Gaza to build up its military force and threaten Israelis. It’s not able provide assurances that rockets will stop terrorizing Israeli civilians, or that balloons with grenades tied to them will stop appearing over southern Israeli towns and villages. It has not visibly decreased its attempts to orchestrate deadly terror squads from the West Bank.

If Hamas wants international money invested into Gaza’s critically ill economy, then it would need to create significant periods of calm and quiet—something the terrorist group has consistently failed to deliver.

Israel has displayed much patience and caution in its dealings with Gaza, based on the understanding that its options range from bad to worse.

Commendably, Prime Minister Netanyahu has not rushed to war as a first solution. But the IDF has nevertheless been preparing for one. If any of the future rounds of escalations leads to war, the IDF knows that this time, it will have to achieve decisive results.

That means striking enemy positions wherever they are. And all of these positions are embedded deeply within Gaza’s civilian neighborhoods. If the IDF detects an enemy headquarters operating on the fourth floor of an apartment building, it can use its accurate firepower to hit the floor without bringing down the whole building.

The potential path to a wider escalation is getting shorter with time. Rounds of fighting can create two or three days of “battle days,” which will then either return to calm or escalate into a wider conflict.

Hamas and PIJ have manufactured rockets with heavier warheads than in the past and with longer ranges. But the IDF has completed a long and qualitative process of preparation and improvement.

It has created new combat networks that link together ground forces, the air force and the intelligence directorate. Field commanders now have access to intelligence, drones and other capabilities as they move through the urban battlefield that did not exist five years ago. The military’s “bank of targets” is constantly being updated.

Israel cannot sit indefinitely on the side and watch residents of Sderot, who have a mere 15 seconds to find shelter, live terrorized lives. It cannot accept Ashkelon coming under regular rocket fire by terror squads who fire from school yards.

If war does come, the IDF will have to attack the enemy where it is.

The wider problem, however, is that while a war may boost Israeli deterrence, it will not fix the economic or humanitarian conditions that years of Hamas rule have created. In fact, after a future war, those problems will only be worse.

It is in Israel’s security interest is to increase the quality of life for Gazans, a fact that the Israeli defense establishment stresses. It is an Israeli interest to decrease the 40 percent unemployment rate in Gaza, which reaches 65 percent between the ages of 20 to 30. These figures are a red blinking light showing that Gaza is on the edge of the cliff.

Every day, more than 400 trucks move from Israel into Gaza bringing commodities.

When Gaza suffers power cuts, it turns off the electricity to sewage-treatment plants, and Gaza’s sewage then washes up on the southern Israeli coastline. This is a small illustration of how it is impossible for Israel to fully “disconnect” from events in the Strip. While hospitals in Gaza now have electricity 24 hours a day, other problems continue to fester.

A spike in Gaza’s unemployment rate

In the past year, Israel has increased the number of merchants who cross out of Gaza via the Erez border crossing—355,500 crossings of this type occurred in 2019, compared to 106,400 in 2018. Exports from Gaza of commodities like agriculture, textiles and furniture are up, but these measures are minor in the grand scheme of things and amount to a band aid on a gaping wound.

Israel wants to see more salaries being paid in Gaza because it knows that can contribute to calm. But one terror attack launched by a Gazan who received an entry permit into Israel can wreck all such efforts.

While Israel recognizes the need to improve the quality of life for Gazans who live under the rule of terror factions that use them as human shields, it cannot give in to terrorists or allow armed attacks on Israeli communities to pass unanswered. A failure to respond appropriately to terrorist aggression would not only damage Israel’s deterrence in its merciless neighborhood, where other foes watch closely, but would also have adverse effects on the wider international community. In the meantime, the complex Gazan problem continues to fester.