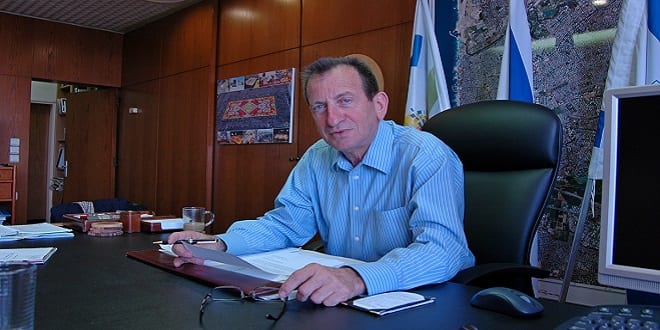 For three years, the Middle East Forum has been engaged in a campaign to wean Americans and Israelis off the deceptive charms of the “peace process” which has, in fact, produced overwhelmingly malign results. Instead, we argue for an Israeli victory and a commensurate Palestinian defeat.

We constantly seek out new ways to bring this argument to the public’s notice, especially in Israel. Although the topic is deadly serious, we’ve had some fun in the process. Israel Victory Project attention-getting tactics have included posters of Hamas leader Ismail Haniyeh in a swimsuit thanking Israel for all the money it sends his organization; a 10-meter tall rubber chicken posed in front of the Israeli parliament and the Defense Ministry; and switching street signs in Tel Aviv (e.g., from Ben-Gurion Street to Yasser Arafat Boulevard).

In this spirit, as the election season heats up ahead of the national vote on March 2, we again sought a creative way to stimulate interest in Israel Victory. We came up with a provocative graphic showing blindfolded Palestinian Authority and Hamas leaders Mahmoud Abbas and Haniyeh photo-shopped against a battlefield scene. Abbas’s hands are raised high while Haniyeh’s hold a white flag. The graphic carries a pungent slogan in Hebrew: “Peace can ONLY be made with defeated enemies.”

To stimulate curiosity, we did not put our name on the posters. The goal, as explained by Nave Dromi, head of the Middle East Forum-Israel office, was to “to spark public discussion about the crying need to change the thinking that characterizes the ‘peace camp.’”

This graphic went up on billboards at five prominent spots in Tel Aviv on Feb. 13.

On Feb. 14, the mayor of Tel Aviv, Ron Huldai, responded by denouncing the signs as Nazi-like incitements to murder. A municipality flack, Eytan Schwartz, actually compared the two depicted monsters to Jewish children in the Holocaust. Well no, the billboards were incitements to victory, not to murder; surrendering prisoners being blindfolded is common the world around. Both Israelis (in Syria) and Americans (in Iran) have experienced this sort of treatment.

The good mayor, who proclaims Tel Aviv to be a city that “celebrates pluralism and tolerance,” is also known for his increasingly autocratic tendencies since coming to office in 1998. In this instance, he peremptorily ordered municipal employees to take down the ads, which they promptly did—freedom of speech and the sanctity of private property be damned.

In other words, without the nicety of first obtaining a court order, Huldai blithely took an illegal step. MEF responded in two ways: we went to court to assert our rights and we released a new version of the poster; this one covers the faces of Abbas and Haniyeh with a “Censored” (in Hebrew) stamp and a list of some of the 30 violent Palestinian attacks in Tel Aviv on Huldai’s watch that left 93 dead.

I draw two conclusions from this incident. First, the concept of Israel Victory, a simple idea with immense implications, gets hugely under some people’s skins. The positive response to it—among Israelis, some Palestinians, and caucuses in the U.S. House of Representatives and the Knesset—enrages those who remain wedded to their “peace process” delusions.

Israel Victory dispenses with the nutty idea of giving an enemy hope, replacing it with the sensible goal of forcing him to give up his war goal. Out goes the saccharine path of appeasement in favor of the bitter doctrine of deterrence. Out goes the illusion of luring Palestinians to give up their foul goal through promises of benefits. When they finally do give up on eliminating the Jewish state, Palestinians can begin to build their polity, economy, society and culture. It’s admittedly a long and tough path, but it will ultimately bring real rewards.

Second, as Israel’s die-hard left continues to decline, it increasingly relies on police methods to discredit its opponents. Prime Minister Benjamin Netanyahu has experienced a barrage of legal cases which (per Alan Dershowitz) in the aggregate “endangers democracy.” Recently, Israel’s police arrested Akiva Smotrich for unauthorized travel to the West Bank and it arrested Yehudah Glick—rabbi, former Likud member of parliament, and victim of a jihadi assassination attempt—for “walking too slowly” on the Temple Mount, then ransacked his house. And Huldai destroyed our billboards.

Where will it end?