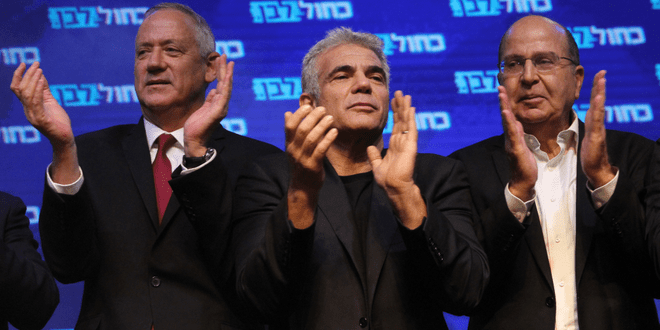 Blue and White Party leaders Benny Gantz and Yair Lapid are establishing their diplomatic credentials in the immediate run-up to Israel’s March 2 election with an insult to a U.S. administration that has arguably provided Israel with more diplomatic gains than any previous administration.

The Times of Israel reported that at a campaign stop in front of English-speaking Israelis, Gantz accused Israeli Prime Minister Benjamin Netanyahu “of neglecting bipartisan ties in favor of exclusive support from U.S. President Donald Trump’s Republican Party,” under the headline “Gantz pledges to mend ties with U.S. Democrats if elected.”

In an interview with The Jerusalem Post, Lapid—Blue and White’s No. 2 on the leadership list and a likely candidate for foreign minister in a government led by the party—similarly criticized Netanyahu’s close relationship to the Trump administration.

He warned that should a Democrat win the presidency later this year, “I think we’re going to be in deep, deep trouble. The Obama time is going to be just a promo for what is going to happen.”

In particular, Lapid chose to take shots at Israeli Ambassador to the United States Ron Dermer. “Dermer is not the Israeli ambassador to Washington; he’s the Bibi ambassador to the Trump administration, and this is not what the job requires,” said Lapid. “He’s not doing his job right,” in part, added Lapid, because he has been focused on strengthening Israel’s ties with evangelical leaders.

In his seven years in Washington, Dermer has been a tour de force for the State of Israel. Dermer’s deep understanding of the American political system made him a key asset for the Jewish state during the hostile Obama administration, as well as the friendly Trump administration.

In his first years in Washington, Dermer was continuously called upon to repair damage to the U.S.-Israel relationship caused by an Obama administration worldview that considered Israel’s continued presence and construction in the disputed territories of Judea and Samaria, as well as much of Jerusalem, as the root cause of all conflict in the region.

Dermer played a critical role in coordinating Netanyahu’s invitation by former House Speaker John Boehner to address a joint session of Congress warning against the dangers of the Joint Comprehensive Plan of Action (JCPOA), aka the Iran nuclear deal. That speech set into motion the opposition that later resulted in the Trump administration’s withdrawal from the deal and the imposition of crippling sanctions against the world’s largest state sponsor of terror.

Dealing with friendlier counterparts in the Trump administration, Dermer has led diplomatic efforts that resulted in significant gains that might not have been possible with a less capable diplomat guiding Israel’s most important strategic relationship.

The trust Dermer has built with members of the Trump administration, including U.S. Ambassador to Israel David Friedman and Jared Kushner, son-in-law and senior adviser to the president, is nearly as strong as the trust he accumulated while serving in his prior capacity as senior adviser to Netanyahu. Netanyahu recently acknowledged Dermer as one of two individuals he believed could successfully succeed him in the future as prime minister (the other being Mossad chief Yossi Cohen).

Dermer is currently positioned as Israel’s point person for the “Peace to Prosperity” framework, a plan that he was heavily involved with over the past three years. He also has extremely strong relationships with numerous Democratic Senators and congressmen. By publicly criticizing Israel’s ambassador to the United States, Lapid is attempting to undermine Dermer’s ability to sell the benefits of the plan to Democrats, who might reflexively reject any initiative presented by the Trump administration as a result of the heated U.S. political climate, including those who continue to profess their bipartisan support for Israel.

Furthermore, the Blue and White leaders are handicapping themselves before possibly entering office, by violating any trust they may have hoped to build with the Trump administration. They are negligently discounting the strong possibility that Trump may win a second term.

The president can be certain that Netanyahu and Dermer will work diligently to apply Israeli sovereignty in the Jordan Valley and settlement communities, as the first step in an exceedingly favorable vision for peace, and to deliver as trusted allies to the United States. Yet now, serious doubts must now be raised about the diplomatic capabilities of a Gantz-Lapid administration, and the strength of any relationship they may hope to have with the Trump administration.

If Trump loses, what may come next is one of a handful of progressive Democratic candidates that have threatened to cut America’s foreign aid to Israel. Lapid and Gantz believe they will be better at handling a Democratic president than Netanyahu was able to handle Obama.

Lapid told The Jerusalem Post that in such a case, “The trick is not only to stand up to the U.S. president, but doing it without burning bridges to half of the American people.”

Meanwhile, Joel Benenson, a former Clinton and Obama adviser who has been imported to help guide Gantz’s campaign, has tweeted condemning “@realDonaldTrump’s racist attacks as well as his use of Israel as a cover for his ‘blatant racism,’” and that “@realDonaldTrump goes about an inch deep when thinking about significant foreign policy matters.”

It appears as though Israel’s potential future foreign minister went “about an inch deep” when considering how his comments may hamstring a Blue and White administration’s ability to work with a U.S. administration that currently views Israel as its most important and reliable ally in the Middle East and possibly the world.

Netanyahu’s ability to build Israel’s position in a hostile region amid a volatile global economy, and to continue to diplomatically engage world leaders—such as Trump, Russian President Vladimir Putin, and more recently, those in the Arab world—to Israel’s immense benefit is among the greatest accomplishments of Israel’s longest-serving prime minister.

By contrast, it is getting increasingly difficult to imagine Gantz and Lapid sitting opposite Trump or opposite Putin, and successfully advancing Israel’s strategic interests.