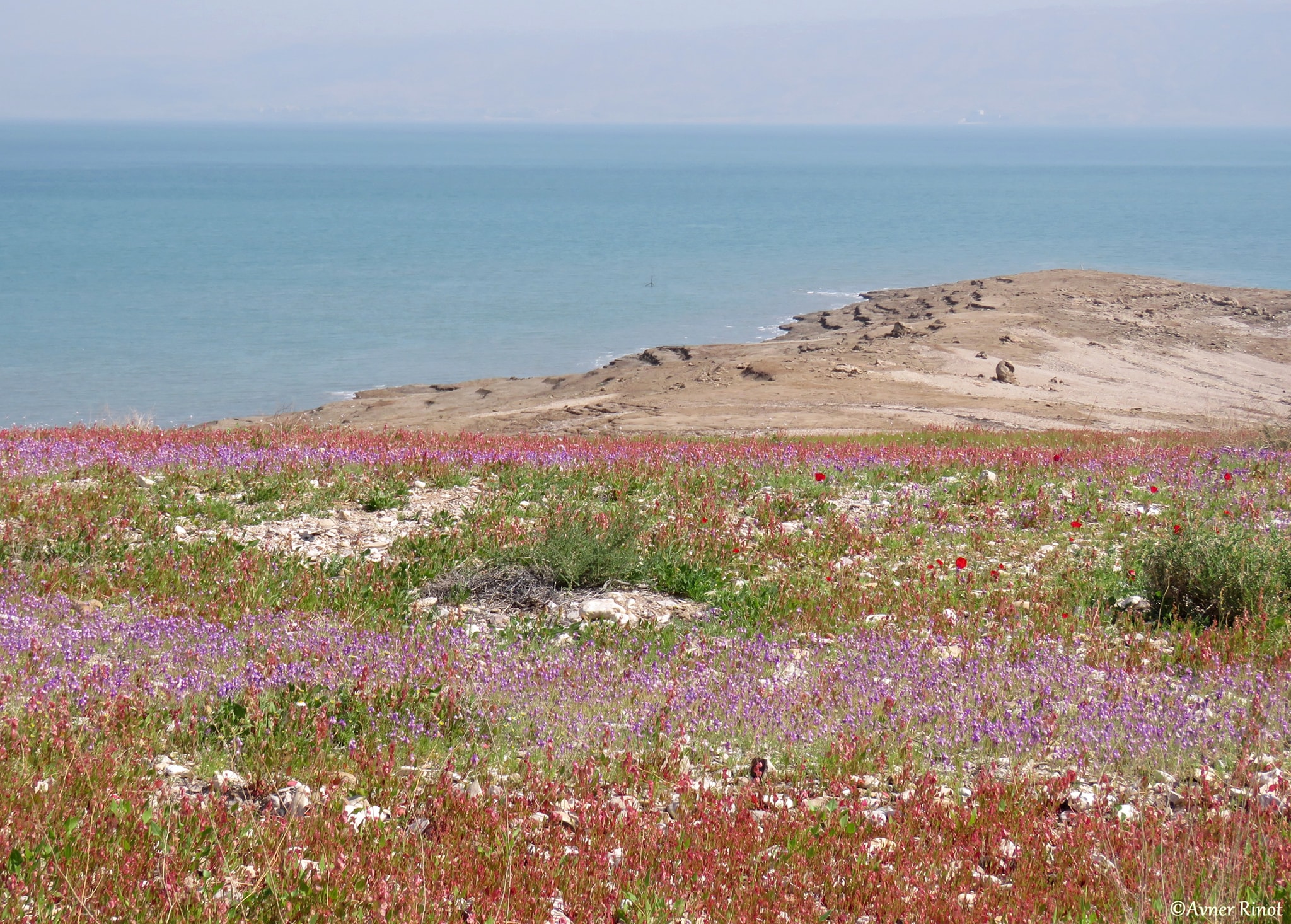 And now, another rare life form has been witnessed across the northern shoreline of the Dead Sea – colorful floral landscapes.

Thanks to Israel’s record rains, the breathtaking flower trails have sprouted from the cliffs to the shoreline of the Northern Dead Sea area.

The four mile stretch from Kibbutz Kalya to Ovnat is alive with newly formed fields of annual species whose seeds can lay dormant in the desert for years until there is enough water for them to sprout.

Known as the Dead Sea in English because of its hypersaline environment (37% salinity – almost ten times saltier than the ocean) and scarcity of aquatic life, Israeli photojournalist Noam Bedein of the Dead Sea Revival Project says that the term Dead Sea – “a political term used mostly by the Romans” – is a misnomer.

The Dead Sea is “anything but dead,” he said, calling it the “eighth wonder of the world.”

Bedein has witnessed fish in Dead Sea sinkholes, microorganisms, growing vegetation and millions of visitors each year who come seeking life through the body of water’s high oxygen levels and special minerals.

Indeed, the existence of fish in the Dead Sea, a reality that seems to contradict the laws of nature, has been explained by science and Biblical prophecy alike.

On the shores of the Dead Sea – more than 400 meters below sea level – are freshwater sinkholes, created as a result of dropping water levels. These large sinkholes were discovered in 2011, carpeted with microorganisms and on the sea’s shores – fish and algae.

“One hundred and sixty researchers and almost every university has something to say about saving the Dead Sea,” said Jackie Ben Zaken, Dead Sea guide and expert on the Dead Sea ecosystem. Sinkholes, he said, are caused by “fresh water running under the ground, meeting the sediment layers and melting them.”

“As a result of these sinkholes, we see habitats with less than 1.5% salinity – water you could drink – surrounded by salt water as well as minerals like bromium, magnesium, and potassium,” he told Breaking Israel News.

But this is no scientific miracle, said Bedein – it’s Biblical prophecy coming to fruition.

“Coming to the Dead Sea, the lowest point on earth, you see prophecy coming true,” he said.

According to the Bible, the landscape changed with the destruction of Sodom and Gomorrah, which turned the valley into a wasteland. The Bible also describes the area as fertile and well-watered in its narrative of Lot looking out onto the valley where the Dead Sea is now:

And Lot lifted up his eyes, and beheld all the plain of the Jordan, that it was well watered everywhere, before Hashem destroyed Sdom and Gomorrah, like the garden of Hashem. (Genesis 13:10)

“A place that was once cursed in Biblical times, now you can come here to the Dead Sea, explore the sinkholes and see fish where the water has receded – fulfilling prophecies from Ezekiel who talked about the land flourishing and blooming when the Jews return,” said Bedein.

I will make the land desolate, so that your enemies who settle in it shall be appalled by it. (Leviticus 26:32)

As the Israel Bible explains, hough this verse is frightening, Nachmanides explains that it is actually a blessing in disguise. “I will make the land desolate; so that your enemies who settle in it will be appalled by it” implies that throughout the ages, no matter how many foreign empires occupy Israel, the land will not cooperate to bring forth its bounty. Indeed, in his book Innocents Abroad, Mark Twain wrote about his visit to Palestine in the 1860’s: “A desolation is here that not even imagination can grace with the pomp of life and action…. Palestine is desolate and unlovely.” Only when the Jewish People return to the Land of Israel does it give forth its blessing and return to its former glory. Today, thanks to the return of its indigenous Jewish population, Eretz Yisrael is once again thriving and prosperous.

Indeed, Biblical prophecy also holds that water will flow east from Jerusalem into the Dead Sea, filling it up with fish and the surrounding desert with life:

“Then said he unto me: ‘These waters issue forth toward the eastern region and shall go down into the Arabah; and when they shall enter into the sea into the sea of the putrid waters the waters shall be healed. And it shall come to pass that every living creature wherewith it swarmeth whithersoever the rivers shall come shall live; and there shall be a very great multitude of fish; for these waters are come thither that all things be healed and may live whithersoever the river cometh.” (Ezekiel 47:8-9)

“The curse is over, and this place and its minerals are now bringing life to people around the world,” he added.

Bedein is no novice in rising to the challenges facing the Jewish people in their Biblical homeland. As director of the Sderot Media Center, Bedein has spent years speaking about the experience of the southern Israeli community of Sderot that is under constant threat of Hamas terrorism.

Now, he’s using the Dead Sea’s story, water treasures and beautiful complexities to inspire the next generation about Israel, hoping that it may also be a solution toward restoring the historical flow of the Dead Sea.