The Return of the Monroe Doctrine

Home » The Return of the Monroe Doctrine 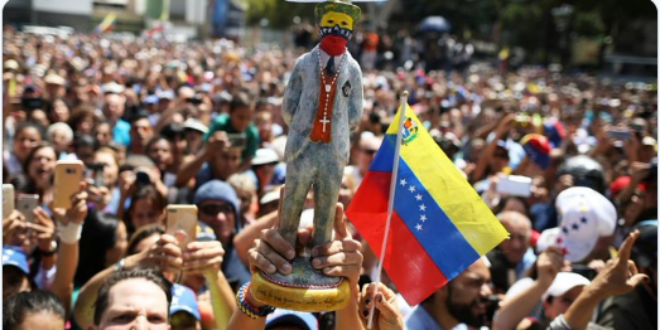 Bipartisanship was in short supply at the State of the Union address earlier this month—with one notable exception.

Nancy Pelosi had been looking dyspeptic, shuffling the papers she would later rip to shreds, when President Donald Trump reminded his audience that “the United States is leading a 59-nation diplomatic coalition against the socialist dictator of Venezuela, Nicolás Maduro.”

Suddenly, the House Speaker applauded. Trump then introduced “the true and legitimate president of Venezuela: Juan Guaidó.” Pelosi rose from her chair, smiled, and put her hands together for the tall, dark and handsome Latin American in the House gallery. When Trump said, “All Americans are united with Venezuelans in their righteous struggle for freedom!” she again stood up and clapped.

I wondered: Was Bernie Sanders, the socialist senator and perhaps leading candidate for the Democratic Party’s presidential nomination, applauding, too? Or was he sitting on his hands and scowling? It turns out he was in New Hampshire, viewing the event on television.

However, Keane Bhatt, one of his policy advisers, tweeted: “There is no better distillation of Washington, DC than a State of the Union in which Pelosi – having just led the impeachment of Donald ‘All Roads Lead to Putin’ Trump – twice joins in a rousing standing ovation of Juan Guaido, Trump’s appointed ‘president’ of Venezuela.”

There’s more. A year ago, Sanders told Univision’s Jorge Ramos that he didn’t recognize Guaidó as Venezuela’s legitimate leader. Asked whether he regarded Maduro as a dictator, he refused to say. That prompted Rep. Donna Shalala, a Miami Democrat, to charge that Sanders “has demonstrated again that he does not understand this situation.”

On the campaign trail, the Brooklyn-born Vermonter likes to say he’s a Scandinavian-style socialist. But in 2003, he signed a letter in support of Maduro’s predecessor, Hugo Chavez, a self-proclaimed Marxist and comrade of Cuba’s Fidel Castro, whom Sanders also has praised. He’s called Daniel Ortega, Nicaragua’s far-left leader, “an impressive guy.” And of course, in 1988, newlyweds Bernie and Jane honeymooned in the Soviet Union.

Want to guess which candidate Maduro is rooting for?

Let me remind you of Venezuela’s riches-to-rags story. Though the country possesses the world’s largest oil reserves, over recent years 90 percent of the population has fallen into abject poverty. Millions of Venezuelans have fled to neighboring countries, burdening those economies.

The nation’s descent began during the 11-year rule of Chavez. He died of cancer in 2013, having designated Maduro as his successor.

On Jan. 10, 2019, following an election widely viewed as neither free nor fair, Maduro was sworn in again. The Organization of American States promptly declared his presidency illegitimate. Venezuela’s National Assembly invoked a state of emergency and, on Jan. 23, Guaidó was declared acting president.

The United States, Canada, Brazil and dozens of other countries are behind him, but a Cuban-Russian axis, also including Iran, China, Nicaragua, North Korea and Syria, supports Maduro. Oh, by the way: The United Nations sides with the authoritarian bloc. U.S. tax dollars at work.

Trump administration efforts to bring about regime change in Venezuela have been principled, persistent and, so far, ineffective.

Russia controls roughly 70 percent of Venezuela’s oil production, profiting to the tune of $2 billion last year, according to estimates I regard as reliable.

No fewer than 25,000 Cubans reside in Venezuela. Some are teachers and doctors but others advise and guard Maduro. Still others are spies and de facto commissars within the country’s bureaucracies, military units and intelligence agencies.

Also playing an especially nefarious role is the Islamic Republic of Iran. Research conducted by Emanuele Ottolenghi, my colleague at the Foundation for Defense of Democracies, reveals that the Maduro regime makes passports and travel documents available to Iranian agents.

Tehran’s regional propaganda headquarters is in Caracas. The two regimes collaborate in a disinformation war against the United States. Their Spanish-language television networks, Hispan TV and Telesur, respectively, share journalists across Latin America.

Hezbollah, the Lebanese proxy of the clerical regime, is firmly ensconced within Venezuela’s large (about 200,000) Lebanese Shi’ite community. “Simply put,” Dr. Ottolenghi notes, “Maduro and his cronies use the trappings of a sovereign state to run a criminal syndicate involved in pillaging state resources and taking commissions from organized crime to use Venezuela as a staging ground for their global smuggling operations.”

He adds: “Hezbollah supporters, concentrated in several areas of Venezuela and along the Venezuela/Colombia border, have, over the years, lent their businesses to trade-based money-laundering schemes designed to repatriate drug money for the cartels—minus a hefty commission for Hezbollah.”

The day after the State of the Union, President Trump met with Guaidó to discuss how “to expedite a democratic transition in Venezuela that will end the ongoing crisis,” according to a White House press statement.

I’d argue that will require additional sanctions, not just on the Maduro regime but also and especially on Russia, which is violating the Monroe Doctrine—President James Monroe’s 1823 warning to Europe that further imperialism in the Western Hemisphere would not be tolerated.

Of course, in 2013, then-Secretary of State John Kerry announced: “The era of the Monroe Doctrine is over.” What he probably meant was that the Obama administration had no wish to dominate the Americas.

Vladimir Putin, the Russian neo-tsar toward whom Bhatt believes Trump is too solicitous, may have interpreted Kerry’s words differently: as an invitation to exploit U.S. neighbors—an invitation he and others have been only too pleased to accept.