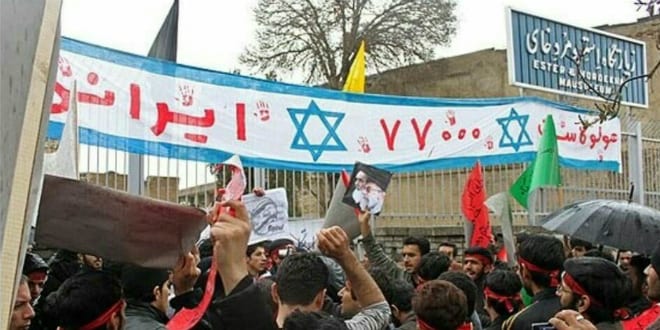 The Iranian branch of the Alliance for Rights of All Minorities (ARAM) organization, which operates in the field of equality of rights in the country, reported on Sunday that the Iranian government is threatening to demolish the Tomb of Mordechai and Ether located in the city of Hamadan.

Breaking: Iranian authorities are threatening to destroy the historic tomb of Ester and Mordechai in Hamedan and convert the site to a consular office for Palestine. @AAzoulay @USCIRF @UNESCO pic.twitter.com/My0dKKJvfo

In a cruelly ironic gesture, the Iranian government plans to turn the burial site of these Biblical Jewish heroes into a Palestinian consular complex.

According to reports, a crowd of Basij, a paramilitary volunteer militia branch of the Iranian Revolutionary Guard, tried to raid the historic site on Sunday as revenge for Trump’s Deal of the Century. Basij, being part of the IRGC, is designated as a terrorist organization by the governments of the United States, Bahrain, and Saudi Arabia.

According to covering reports, members of Iranian #Basij attempted to raid the historic site yesterday in an act of revenge against the Israelis Palestinian peace plan by President Trump. #dealofcentury. #EsterandMordechai pic.twitter.com/TspHom7VWM

The story of the Jewish victory related in the Book of Esther is the basis of the holiday of Purim. Set in ancient Persia, known today as Iran, the arch-enemy of modern Israel. Tucked away in the town of Hamadan in a corner of Iran is a 500-year old building purported to be the burial site of the heroes, Mordechai and Esther. A previous structure is believed to have been destroyed in the 14th century by Mongol invaders.

The Iranian city of Hamadan, 200 miles west of Tehran, claims to be the Biblical city of Shushan, the capital of ancient Persia and the setting for the story of Purim.

In those days, when the king Achashveirosh sat on the throne of his kingdom, which was in Shushan the castle. Esther 1:5

Most would assume that the site commemorating the Jewish heroes would be hidden away or in danger, but until the recent violence, the site was revered and Jews were permitted free access. The site is proudly displayed, known to all, and Persian Jews visit the site annually en masse to read the Book of Esther.

The tomb bears witness to the complicated status of Jews in Iran. Despite Israel being the arch-enemy of the present regime, that was not always the case. In 1970 there were more than 100,000 Jews in the country. Due to a mass exodus after Iran’s 1979 revolution and the founding of the Islamic republic, there remain fewer than 30,000 Jews Iran today. However, the community still constitutes the largest population of Jews in the Middle East outside Israel.

In 2008, the Iranian government added the site to its National Heritage list, thereby putting it under government protection. Three years later, anti-Israel protesters surrounded the tomb and threatened to tear it down. The tomb was removed from the Heritage list, and the official state news agency explained the decision by pointing out that Purim was a celebration by Jews for their massacre of Iranians.

The report is based on a publication in a Christian-Iranian news agency claiming that on February 7 which stated, “The Council for the Exploration of Student Mobilization of Hamadan Universities said in a statement to the United States, Israel and the Arab countries in the region that they will turn the tomb into a Palestinian Consulate if any action is taken.”

However, Ali Malamir, executive director of the Madan District Cultural Heritage and Tourism, was quoted as saying, “This is a national property and has nothing to do with the establishment of a Palestinian consulate.” It is unclear at this point in time whether the plan will remain at the declaration level or whether the plan will be instituted.

Islam is replacement theology, usurping all the religious characters described in the Torah and the New Testament, claiming them all as Muslim prophets. As such, Islam has taken over many Christian and Jewish holy sites, claiming them as exclusively Muslim. A 1,500-year-old synagogue located at Ezekiel’s Tomb in Al Kifl, Iraq was recently destroyed and replaced by a mosque.