‘Idolatrous’ Festival to be Held in Ancient Sodom

Home » ‘Idolatrous’ Festival to be Held in Ancient Sodom 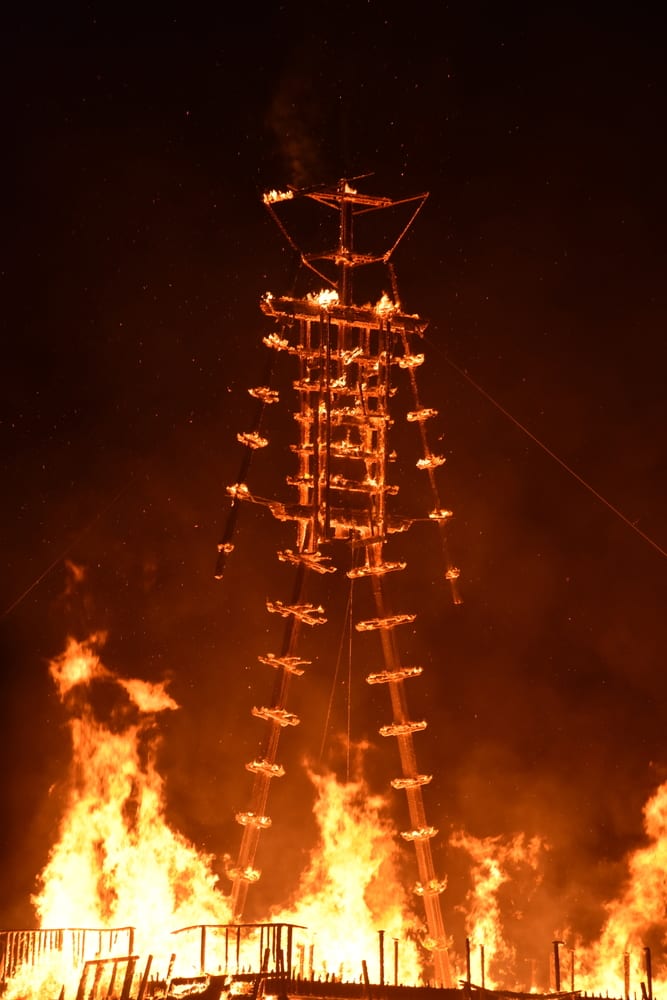 The ten-day Burning Man Festival held in the Nevada Desert began over 30 years ago as a small campfire gathering of California artists. It has evolved into a massive annual festival bringing almost 70,000 people to the middle of the desert in Nevada. Billed as a cultural gathering,  many of Burning Man’s major elements are rooted in idolatry. Regular Burning Man installments are a Temple to the Hindu goddess Shiva and a 70-foot long seven-headed red metal dragon on wheels. The dragon, named for the ancient Egyptian god Abraxas, was clearly intended to reference Satan as described in the Christian Book of Revelations. The massive camp is set up to form a massive pentagram in the desert. The festival culminates in the eponymous ceremony in which a large wooden effigy of a man is burned. This ceremony referred to by Druids as the ‘wicker man’ is almost universal amongst pagan cults and evolved as a replacement for human sacrifice.

The festival is characterized by widespread nudity and areas set aside for licentious behavior. There are also reports of widespread use of illegal drugs, most notably hallucinogens.

An Israeli partner to Burning Man was established. Midburn (a play on the Hebrew word midbar מדבר for ‘desert’) held its first six-day festival in the Negev desert in southern Israel in 2014. The third Midburn event, in 2016, had an attendance of 8,000 participants, making it the 2nd biggest regional event outside the US. As of 2018, it is the only Burning Man regional event in the Middle East. The burn is scheduled to be held every year in May or June, around the holiday of Shavuot.

Complaints from residents of nearby Sde Boker concerning disturbances and noise cause by revelers as well as environmental damage to the desert led organizers to seek an alternative site. Midburn received initial approval to hold the event in a military training zone in the south. But several months before the event, the IDF rescinded the permit, saying it would need to use the area for drills.

When Midburn announced that their next event would be delayed until 2021, some ‘burners’ (as the participants call themselves) decided to hold an alternate event called the Dead Sea Burn. As wide-open spaces in Israel are rare and require permits from the government and the military, the search for alternate sites led them to consider alternate sites in Judea and Samaria. They scheduled an event for April 4-18, receiving approval by Israel’s military for up to 15,000 people to gather on an area that belongs to Kibbutz Beit Ha’arava.

The Facebook invitation notes that by Burning Man standards, the site is unusually accommodating, with no sound restrictions and permission to burn as much as desired. The nearby community will provide running water and electricity.

It is interesting to note that the festival area is across the Jordan River from the region that archaeologists believe was Biblical Sodom and Gomorrah.

The Israeli incarnation of Burning man appears more subdued, with none of the original’s pagan trappings. Breaking from though mimicking the pagan roots of the parent festival, Midburn culminates in a bonfire of wooden sculptures. Also, the Midburn camp, though arranged in a ‘C’ shape like the Nevada Burning Man camp, the camp in the Negev does not feature a pentagram in its center. In truth, it might be an echo of the Congregation of Israel in the Exodus. The event is family-friendly, with several theme camps of parents and children. Midburn even offers a special ticket rate for children under 14.

But Biblical Israel, even a region designated as Israeli Area C by the Oslo Accords, is considered off-limits by the Burning Man community who say that Jews living or partying in Judea and Samaria violate the original event’s founding principles of community and “radical  inclusion.” Midburn claims that holding events in Judea and Samaria would compromise its apolitical nature, so the group chooses to boycott the region. The Dead Sea Burn Facebook page is flooded with criticism, claiming the organizers are selling their political beliefs by holding the event in “occupied territory.”

This is a case of the anti-Israel left-wing eating its own since the organizers are decidedly left-wing. Organizer Yaron Ben Shushan told Haaretz, an extremely left-wing antiIsrael media that referred to the event as “the annexation festival” that he was not, by nature, politically inclined.

“In my worldview, I don’t see a world with borders, with lines between people,” Ben Shoshan said.

Ben Shoshan responded to the criticism on the event’s Facebook group that while “it is indeed beyond the Green Line, in recent days there has been talk about annexing this territory to the State of Israel.”

The organizers have been pushing to invite nearby Palestinians to the event but this would require army permits, which the IDF has been reluctant to provide.

The Palestinian Authority leaders also oppose any opportunity for their people to mingle with Israelis. Saeb Erekat, the secretary-general of the Palestine Liberation Organization (PLO), formerly a terrorist organization, called the invitation “insulting.”

“So they come to the occupied territory, to an area where the occupation negates Palestinian development through a network of checkpoints, roadblocks, and closed military zones, where our natural resources are stolen and our rights, in general, are negated, and then they tell us ‘you can attend’ in a closed military area.”

It is interesting to note that it would be impossible for the festival-goers to visit Erekat in Jericho since it is illegal for Jews to enter the city. While rejecting numerous offers that would have created an independent Palestinian state, the Palestinian Authority actively works to suppress any efforts that would bring about social coexistence with Jews and Palestinians living together and interacting.

The location of the festival was a kibbutz established in 1939 by European members of Zionist youth movements who had fled Nazi Germany to Mandatory Palestine. In 1948, the kibbutz was abandoned after Jordan invaded and illegally occupied the Jordan Valley. In 1980, Beit HaArava was re-established as an IDF Nahal outpost, becoming a civilian community in 1986. In 2000, the Applied Research Insitute Jerusalem (ARIJ), a Palestinian NGO based in Bethlehem, claimed the town was built on Palestinian land so Beit Arava moved 5 kilometers westward. Nabi Musa (the prophet Moses), a Muslim holy site they claim is the tomb of Moses, had a male population of three. Today, 300 Palestinians live nearby. ARIJ claims that Jewish communities in the region were built on over 1,000 acres of land belonging to the original residents of Nabi Musa.