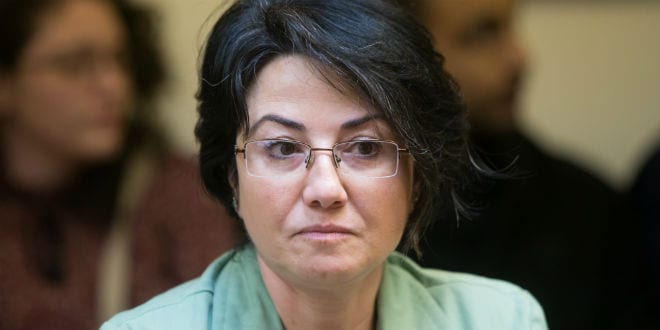 1. negation of the existence of the State of Israel as a Jewish and democratic state;

3. support of armed struggle, by a hostile state or a terrorist organization, against the State of Israel.

Two recent events underscored just how distorted the democratic practice in the nation-state of the Jews has become, and how detached it has become from the laws that are purported to regulate it.

The first was the unanimous disqualification by the Knesset’s Central Election Committee of the newly formed party of Larissa Trimbobler-Amir, wife of Yigal Amir imprisoned for the assassination of for Prime Minister Yitzhak Rabin.

As heinous one might believe the actions for which Amir was convicted may be, questioning the official version is not by any stretch of the imagination an expression of support for a foreign power or a terror organization, a denial of Israel as a Jewish and democratic state, nor an incitement to racism.

However, articulating any doubt as to the validity of the official version of the Rabin assassination is a sacrosanct taboo in Israeli society. Violating it almost inevitably imperils both the professional and personal standing of any foolhardy heretic—as the unfortunate Islamic scholar Mordechai Kedar recently discovered. (Indeed, I might be skating on thin ice myself by merely writing these innocuous few lines.)

Of course, not all challenges to judicial verdicts (even when underpinned by defendants’ confessions) elicit such apoplectic responses. Thus, for example, the more than decade of  doubt that surrounds the grisly 2006 murder of schoolgirl Tair Rada has been the subject of much public debate and even a four-part prime-time TV series (now on Netflix), despite a confession of the convicted suspect and a High Court rejection of his appeal.

As usual, the Central Election Committee’s decision will be appealed in the High Court, which will be the ultimate arbiter of Trimbobler-Amir’s candidacy.

The second event was the ramming attack against Israel Defense Forces’ soldiers in the early hours of Feb. 6, 2020, when a Palestinian Arab drove his vehicle into the group, injuring at least 12, one seriously.

Ofer Kassif, the sole Jewish Knesset member of the dominantly Joint Arab List, responded to the attack as follows: “The liters of blood that was split last night was not the result of a divine decree but of Balfour [a reference to Israeli Prime Minister Benjamin Netanyahu’s residence] with the collaboration of the White House. Netanyahu is heating up the situation, and he will sacrifice both Palestinians and Israelis (including soldiers) on the altar of annexation. They are all needless victims of the [Israeli] occupation and repression.”

From this, we are apparently supposed to believe that on hearing about the “deal of the century” recently aired by the White House, the driver became uncontrollably enraged that he simply had no other option but to hop into his car and drive it headlong into the nearest group of IDF servicemen he came across—all this, of course, after the Palestinians steadfastly refused to engage in any discussion on the US initiative.

But this is not the only instance of naked anti-Israel animosity from the Joint Arab List and its pernicious components. Indeed, only a few days ago in a TV interview, Ayman Odeh, head of the list, reiterated his oft expressed condoning of attacks  against IDF soldiers serving across the 1967 Green Line.

Innate and enduring enmity, both individual and collective

In previous columns, I have cataloged the innate and enduring enmity shown by the Knesset members of the Arab parties comprising the Joint List towards the founding ethos of Israel as the nation-state of the Jewish people, and their unequivocal identification with Israel’s most vehement enemies (see for example here).

For additional chronicles by others, see here and here.

Such malfeasance included, among other things: spying for Hezbollah in 2006; smuggling mobile phones to convicted terrorists in prison; consorting with leaders of enemy states; expressing support of terrorist organizations and justifying attacks against IDF personnel and civilians across the 1967 Green line.

However, it is not only individual acts of specific Knesset members that should be cause for concern.

Indeed, even a cursory perusal of the official platforms both of the Joint List itself and its component factions reflect a stark rejection of Israel as the nation-state of the Jewish people as set out in the Declaration of Independence and an equally stark violation of the letter (and spirit) of the Basic Law: Knesset stipulating the conditions for participating in the national parliamentary elections.

Thus, for example, the Balad platform on the faction’s official site devotes almost 500 words to the transformation of Israel from a Jewish state to a state of all its citizens, including a procedure for the acquisition of Israeli citizenship that would ensure an Arab majority, if it were adopted.

Clear contravention of conditions
For example, the Hadash faction platform declares: “… Israel cannot be a democratic state if it continues its policy of discrimination against the Palestinian-Arab population within Israel [i.e., Israel’s Arab citizens]. National and civic equality is the incontrovertible right of the national Arab minority in Israel, based on its right to justice in its homeland.

Perhaps even more perturbing is the platform of the Joint List itself, today the third-largest party in the Israeli legislature, which promulgates: “… rejection of the Israeli demand that the Palestinians recognize Israel as a Jewish state, and the exposure of the danger this entails to the standing and the rights of the Arab citizens [of Israel] and the rights of the [Palestinian-Arab] refugees.”

Elsewhere it proclaims: “We will work to enact a Basic Law, whose fundamental principle will be civic equality for all citizens based on individual and group human rights, separation of religion from state and the prohibition of all forms of discrimination on the basis of race, nationality, religion, gender, faith or political affiliation; and will provide the legal basis for egalitarian political participation in a state-of-all-its-citizens.”

In addition, the Joint List commits “to work to annul the Nationality Law [Basic Law: Israel as the Nation-State of the Jewish People] and all laws intended to provide legal legitimacy to racism and any racist policy.”

Significantly, the Nationality Bill was passed specifically to ensure the status of Israel as the nation-state of the Jewish people—so the intention to annul it (not modify it) is clearly a repudiation of Israel as such—and thus also a blatant violation of the letter (and spirit) of the Basic Law: Knesset, stipulating the conditions for participating in the national elections for the Knesset.

But the Joint List’s platform does not only focus on legislation that defines the dominant Jewish nature of Israel. It also promotes actions that would undermine its national security.

The first is that, given the range of threats facing Israel (from the surrounding Arab/Muslim world), the IDF—and hence, the security of the nation—is critically dependent on compulsory conscription. Accordingly, the call to annul such subscription is tantamount to crippling the Israeli military and exposing the country to existential threats.

The second is by utter rejection of  participation of Arab society, not only in any format of collective contribution to the security of the state, but also to the wider civil society of Israel, the Joint List unambiguously endorses the detachment of Arab society, as a whole, from any role in shaping the fate of the country and the eschewing of any partnership in a shared destiny for the future.

Time for defensive democracy to kick in

Commitment to the tenets of democratic governance, societal pluralism and sociocultural tolerance is not a suicide pact. Indeed, as one prominent philosopher of the last century astutely pointed out: “In order to maintain a tolerant society, the society must be intolerant of intolerance.”

It is time for defensive democracy to kick in. It is time to apply the letter and the spirit of the laws that are purported to set out the rules for the democratic process in the country. It is time to preclude parties, who would undermine the foundations of Israeli democracy by exploiting the freedoms those foundations afford them.

This of course, does not mean that the Arab citizens of Israel should not be permitted to vote, only that they will not be able to vote for parties that reject the very basis on which the state was founded.

Any further leniency in this regard will lead to disaster—for Jew and Arab alike.