Sanhedrin Gets Authorization to Use Their Trees for Third Temple

Home » Sanhedrin Gets Authorization to Use Their Trees for Third Temple 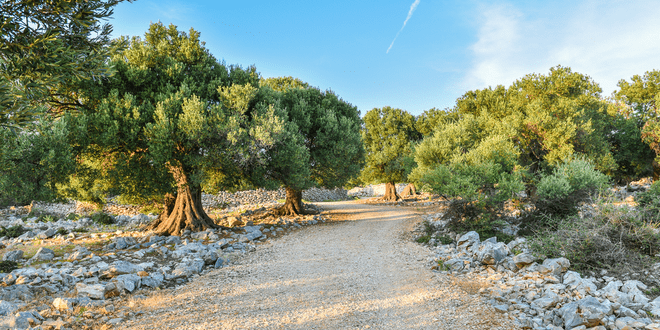 Five years ago, the Sanhedrin began planting in preparation for the needs of the Third Temple and today is the first day the fruit of their labor can be used.

Most people envision the Temple as a form of open-air barbecue with animals being slaughtered and burned on the altar. Though it is true that animal sacrifices play a central role in the Temple service, the plant world also played a significant role.  The wine libation came from vines cultivated using a specific method. Grain offerings were necessary elements in the daily Temple Service. Large amounts of the highest quality olive oil were used in the menorah. Bikurim (firstfruits), brought from the seven species special to the land of Israel, played a seasonal role in the Temple, as did the four species of trees that are used every Sukkoth.

Even the wood burned on the altar was harvested especially for Temple use and individually checked for worms. Ever-present on the altar were three piles of wood: the first for burning the animal sacrifices, the second for making coals to burn the incense, and the third for the perpetual altar fire commanded by the Bible.

And the fire upon the altar shall be burning in it; it shall not be put out: and the Kohen shall burn wood on it every morning. Leviticus 6:5

The wood used in these arrangements were considered sacrifices. In the Second Temple period, the wood was provided as an annual offering.

And we cast lots, the Kohanim, the Leviim, and the people, for the wood-offering, to bring it into the house of our God. Nehemiah 10:35

Some agricultural needs were quite obscure.

“The Mishna (Talmud) states that the Passover Lamb was roasted on a stick from a pomegranate tree,” noted Rabbi Weiss. “When the Temple is built, we will need millions of these sticks.”

In 2017, the Sanhedrin planted 30 pomegranate trees which were a small step towards fulfilling the needs of the Third Temple. But this small step had great spiritual significance.

“Just as the animal sacrifices were used to fix and give sustenance for the world of animals, which includes Man, the vegetative elements of the Temple provided sustenance, spiritual and material, for the plant kingdom,” Rabbi Hillel Weiss, the spokesman for the Sanhedrin explained to Breaking Israel News.

“It is the lack of the Temple that has led to the sad state of the environment,” Rabbi Weiss said. “This year especially, there have been so many forest fires, in Brazil, California, Australia, and in other places around the world. If the UN was really universal and not just a political tool, they would be leading this. But they don’t. Fixing the environment has become big business and politics and this is killing the world.”

“The forests need for us to connect them to their creator. We received this role in Eden and the proper expression of this is in the Temple from which the sustenance of the world begins.”

“All this emphasis on ‘global warming’ is an abomination. The godless secular have taken a deep spiritual truth, that we are caretakers of the planet, and turned it into idolatry in which they claim that we can fix the global environment without Divine help. People who believe in the Bible need to take the lead in fixing the plant world and the proper focal point for this is the Temple.”

Toward this end, the Sanhedrin began planting trees and vineyards five years ago. But, until this day, they were unable to utilize the fruits. For the first three years of their growth, grapevines or fruit trees planted in Israel are categorized as orla (ערלה, literally ‘uncircumcised’ and it is prohibited to eat the fruit. When the Temple stood, the fruit of the fourth year was considered neat revai (נטע רבעי) and had to be brought to be eaten in Jerusalem.

When you enter the land and plant any tree for food, you shall regard its fruit as forbidden. Three years it shall be forbidden for you, not to be eaten. In the fourth year all its fruit shall be set aside for jubilation before Hashem; and only in the fifth year may you use its fruit—that its yield to you may be increased: I Hashem am your God. Leviticus 19:23-25

Fruit that is grown in the fifth year was permitted to be eaten in the normal manner. This commandment is still observed in Israel today even though there is no Temple standing in Jerusalem.

The fifteenth day of the Hebrew month of Shevat, commonly called Tu Beshvat, is named as the New Year for trees in the Mishna (oral law). Any tree planted before this day will be considered one year old on Tu Beshvat. After a tree has seen three of the holidays, it is no longer considered orla and the fruit grown after the fourth Tu Beshvat can be brought to Jerusalem.

On Tuesday, the day after the holiday of  Tu Beshvat, the fruit from the first trees and grapevines planted by the Sanhedrin will be fit to be used in the Temple.

“Israel is a relatively small country but has diverse climates that vary greatly,” Rabbi Weiss explained. “Specific trees thrive in different areas of the country. Understanding this throught planting trees is a way of developing an intimate relationship with the land that embodies the relationship between the Jews and God.”

“Jews have always celebrated the holiday of Tu Beshvat by planting trees but it is really a global holiday, as was seen when the House fo Prayer for All Nations stood in Jerusalem,” Rabbi Weiss said. “People from all nations who believe in the Bible should accept this as the holiday to plant trees wherever they are, to fix the world of the vegetative.”

In the Hebron Hills, the Sanhedrin planted 30 Cedars of Lebanon and several pomegranate trees. In Kochav Hashachar overlooking the Jordan Valley, they planted half an acre of grapevines surrounded by Cedars. In Shaarei Tikvah in Samaria, cinnamon trees, one of the 11 ingredients in the Temple incense, are ready to be planted. In Itamar, a vineyard of 200 vines has been dedicated to Temple use. Seven date palms were planted in the Western Negev for use in the Shavuot offering.

“This relationship with the land of Israel is exclusive to the Jews. The land will only flourish for the Jews and when it does, this is a sign that the Messiah is imminent,” Rabbi Weiss said, citing Ezekiel.

But you, O mountains of Yisrael, shall yield your produce and bear your fruit for My people Yisrael, for their return is near. Ezekiel 36:8

In Biblical times, planting trees was one of the ways ownership of the land was expressed, as was done by Abraham.

[Avraham] planted a tamarisk at Be’er Sheva, and invoked there the name of Hashem, the Everlasting God. Genesis 21:33

“The trees are also a graphic message to Donald Trump and all the other world leaders,” Rabbi Weiss said, noting that this year, the Sanhedrin is planting trees in areas that are going to be surrounded by Palestinian controlled regions should the ‘Deal of the Century’ be enacted. “The Jews have returned and we have taken possession of the land, just as God commanded. The trees bear witness that the land is ours, that it is flourishing as never before, and that it is all for God’s glory in the Temple in Jerusalem. Anyone who tries to divide the land, to defile the covenant, is putting himself where no man can be, no matter how great he thinks he is.”

The Sanhedrin has initiated several projects focused on establishing Jerusalem as a universal House of Prayer for All Nations. One such project was a concert held on the anniversary of the creation of the world. Another project is the establishment of an Organization of 70 Nations. The first meeting of this organization was highlighted by a Noahide sacrifice on the Mount of Olives.