Israeli Sovereignty and the Fate of the Trump Plan

Home » Israeli Sovereignty and the Fate of the Trump Plan 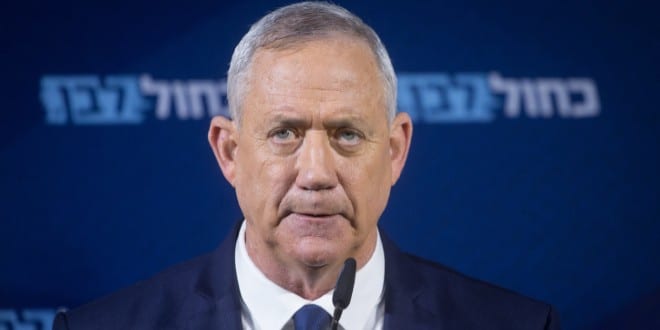 On Wednesday morning, Never Trump propagandist Bill Kristol told his MSNBC audience that Democratic chances of victory over US President Donald Trump will rise if Prime Minister Benjamin Netanyahu is defeated in Israel’s elections on March 2.

Along the same lines, if Netanyahu fails to apply Israeli sovereignty to the Israeli communities in Judea and Samaria before the election, not only will he almost certainly lose those elections, his defeat will bury Trump’s peace plan and harm Trump’s reelection chances.

To understand why this is the case it is first necessary to understand the nature of the Blue and White party and its relationship to Trump and his peace plan.

After Trump’s peace plan was published, Israelis discovered significant problems with the map attached to the plan. Among other things, the map places large sections of Highway 60, which crosses Judea and Samaria from south to north outside Israeli jurisdiction. If left uncorrected, the designation will endanger the security of tens of thousands of Israelis whose communities will be rendered isolated enclaves. Since ensuring Israel’s ability to defend itself and its citizens on a permanent basis is a major goal of the plan, this omission was obviously an oversight. Netanyahu announced this week that he has assembled a team to work on the map.

So long as the map is not adjusted, members of Likud and other parties in the right-religious bloc Netanyahu leads will be unable to vote in favor of the plan, despite their support for Trump and for the plan overall. This then brings us to Benny Gantz and his party.

Just before Gantz traveled to Washington to meet with Trump at the White House last Monday, it came out that his top campaign strategists, Ronen Tzur and Joel Benenson had both separately published multiple posts on Twitter viciously attacking Trump. Both men compared him to Hitler, called him a Russian agent and a racist. In other words, both men parroted Democratic talking points against Trump. (After his posts were reported, Tzur claimed that he no longer believed the things he had written.)

Whereas Tzur – like every garden variety Israeli leftist politico – apparently follows the Democrats on everything related to American public affairs automatically, Benenson shapes Democratic positions. Benenson served as Barack Obama’s senior political strategist in the 2008 and 2012 elections and as Hillary Clinton’s senior political strategist in 2016.

Now Benenson is directing Blue and White’s campaign, and there is little reason for surprise at the seamlessness of his move from Obama and Clinton to Gantz. The Israeli left has been intertwined with the Democratic Party.

In 2016 when Gantz was still a private citizen, he was strongly encouraged to enter the political fray by a public service company called Darcheinu, or “Our Way.”

Darcheinu is the successor to two organizations – V-15 and One Voice. One Voice was established in 2003 by Daniel Lubetsky, a Mexican-American Jewish businessman with close ties to the Obama administration. Lubetsky founded One Voice at the height of the Palestinian terror war to advance the establishment of a Palestinian state and an Israeli withdrawal to the 1949 armistice lines. PLO Chief and Palestinian Authority Chairman Mahmoud Abbas’s son Yasser Mahmoud Abbas is a member of One Voice’s Trustees Advisory Council.

Ahead of the 2015 Knesset elections, One Voice formed V-15 as a spinoff to run a campaign to “change the government” – that is, to bring down Netanyahu. V-15’s campaign was directed by Jeremy Bird, Obama’s field director in his presidential races. It came under scrutiny from the US Senate when it was discovered that the Obama’ State Department funded its efforts.

Establishing a Palestinian state and fomenting an Israeli evacuation of Judea and Samaria replete with the expulsion of hundreds of thousands of Israeli Jews from their homes is a goal all three groups share with the Democratic Party. And like the Democrats, the goal places all three groups in opposition to Trump. Trump’s plan makes the establishment of a Palestinian state contingent on significant changes in Palestinian actions and positions. It also foresees Israel retaining permanently all Israeli communities in Judea and Samaria and the areas surrounding them as well as the Jordan Valley.

In recent years, Darcheinu continued V-15’s efforts to bring down Netanyahu. In 2017-18, it sponsored the weekly leftist protests outside Attorney General Avichai Mandelblit’s home demanding he indicts Netanyahu. Darcheinu also funded and promoted the 2018 campaign by the far-left Commanders for Israeli Security calling for the establishment of a Palestinian state and an Israeli withdrawal to the 1949 armistice lines.

Until 2019, Darcheinu was led by Israeli businessman Kobi Richter. Richter was one of the central activists responsible for forming the Blue and White Party last year. In an interview with Globes, Richter said that he paid for the polls that convinced Gantz to join forces with Moshe Yaalon, Gabi Ashkenazy and Yair Lapid.

According to officials with knowledge of the events, Gantz was well-aware of the substantive problems with the map attached to the Trump peace plan when he left Washington. And it is with this knowledge in mind that we need to consider what he did when he got back.

Upon returning to Israel Gantz declared that he intended to introduce the Trump plan to the Knesset for approval. Some commentators portrayed his move as proof that he supported Trump’s peace plan. But given his awareness of the problems with the map and the implications for the political right, the opposite appears to be the case. Gantz’s announcement can better be seen as a bid to subvert and discredit Trump’s plan and to discredit Netanyahu and Trump personally.

Without corrections to the map, Likud and other right-wing lawmakers who otherwise support the plan and enthusiastically support Trump will be unable to vote in favor of it in a Knesset vote. Forcing them to oppose the plan publicly would serve several interests shared by both Blue and White and the Democrats. It would provide cover for the majority of Blue and White lawmakers who, like the Democrats wish to bury the plan. With the media scope-locked on right-wing opponents of Trump’s plan, they will avoid scrutiny of their own views.

The sight of Likud lawmakers opposing the Trump plan would discredit Netanyahu in the eyes of his voters. They would view him as incompetent and treacherous and many will avoid voting on March 2 as a result.

In light of joint opposition to the Trump plan from Likud and Blue and White lawmakers alike, center-right voters will perceive the parties as indistinguishable and follow the media’s urging to vote for Gantz.

For Trump, a Knesset defeat of his plan, followed in all likelihood by the defeat of Netanyahu would demoralize and anger Trump’s evangelical Christian base. Blue and White would move quickly to bury Trump’s plan. The Democrats would use the Knesset’s opposition to the plan and Gantz’s support for their positions as proof that Trump’s pro-Israel bona fides are skin deep and that Trump’s overall Middle East policy is misguided.

In short, advised by Benenson, after enjoying Trump’s hospitality, and benefiting from the prestige a meeting at the Oval Office confers, Gantz raised an initiative that would cause grievous political harm to Netanyahu and Trump and destroy any prospect of implementing any part of Trump’s peace plan.

And so we return to the issue of applying Israeli sovereignty in Judea and Samaria.

In light of the need to correct the mistakes in the map, it is clear that full implementation of Israeli sovereignty over the areas the Trump deal recommends will take time and will be impossible before March 2. But it is still possible to implement a significant component of the plan in a manner that will avert the damage Gantz and Benenson are seeking to cause.

Gantz has studiously worked to prevent his party from being identified with the ideological left. To achieve this goal despite the fact that the majority of his Knesset faction holds leftist and far-leftist views, Gantz has used the two center-right lawmakers from his party’s minority Telem faction as his campaign’s primary spokesmen on television. Whereas Yoaz Hendel and Zvika Hauser are pushed in front of microphones to extol the virtues of extending Israeli sovereignty to the Jordan Valley, the majority of Blue and White lawmakers, who share Obama’s views, are hidden in the shadows.

Without changing the maps, and while postponing approval of the Trump plan itself, the Netanyahu government can pass a government decision to apply Israeli law to all Israeli cities, towns, and villages in Judea and Samaria immediately in accordance with the Trump peace plan. Doing so will energize right-wing voters. And it will also expose Blue and White.

Applying Israeli law to the Israeli communities will arouse strenuous opposition from the majority of Blue and White faction members. Their opposition to a move that the majority of Israelis support would demonstrate that despite its right-wing fig leaves, Blue and White is a leftist party. Swing voters from the center-right would get the message.

This then brings us to the Democrats. For years, despite their protestations of support for Israel and commitment to Israel’s security, the Democrats have adopted a policy towards Israel that revolves obsessively around their demand to destroy the Israeli communities in Judea and Samaria and transfer the areas Jew free to the PLO. The Obama administration was so hateful towards these communities that it pushed through UN Security Council resolution 2234 that slanderously called them “illegal” after Donald Trump was elected president.

By applying Israeli law to these areas while avoiding a Knesset vote until after the map is corrected, the Netanyahu government will deny Democrats the ability to use Trump’s peace plan against him. It will also demonstrate Trump’s commitment to Israel to his evangelical base. Most importantly, applying Israeli law to the Israeli communities in Judea and Samaria will take the issue of their future off the table and ensure that the Trump peace plan will survive into the next government, regardless of who wins next month.

Senior presidential advisor Jared Kushner has said that it would be best to wait until after the election to begin applying Israeli sovereignty to areas in Judea and Samaria. Under normal circumstances, he would be right. But given the larger context in which this issue must be judged, it is fairly clear that delaying the move until after the elections will cause great harm to President Trump, and effectively bury his peace plan while elevating the Israeli left and the Democrats.