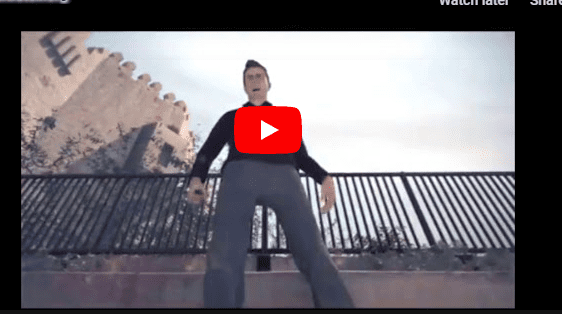 An animated video that encourages murdering Israelis by showing graphic recreated scenes of real terror attacks has appeared on TikTok – a social network popular among children, where users can create and share short videos.

The video shows four lethal terror attacks that were committed against Israelis – a terrorist who rammed his car into Israelis at a Jerusalem light rail station, another who shot at Israeli police, and two stabbers. An eagle – possibly symbolizing the eagle in the emblem used by the Palestinian Authority and the PLO – flies above the carnage throughout the video, at one point moving in unison with 19-year-old Palestinian terrorist Muhannad Halabi as he stabs a religious Jew in the Old City of Jerusalem. The video carries the text “Jerusalem is the dread of the Jews,” followed by a red heart.

The following are screenshots from the animation paired with details of the Palestinian terrorists and the attacks they apparently portray: Car ramming attack: Palestinian terrorist and Hamas member Ibrahim Al-Akari from East Jerusalem deliberately ran over several Israelis with a white van at a light-rail station in Jerusalem on Nov. 5, 2014, murdering Jidan Assad, 38, and Shalom Aharon Badani, 17, and wounding at least 13 others. The terrorist was shot and killed by Israeli police officers who arrived on the scene. Stabbing attack: 19-year-old Palestinian terrorist Muhannad Halabi murdered 2 Israelis, Rabbi Nehemiah Lavi and Aharon Bennett, and injured Bennett’s wife, Adele, and their 2-year-old son in a stabbing attack in the Old City of Jerusalem on Oct. 3, 2015. Following the attack, the terrorist was shot and killed by Israeli security forces. Drive-by shooting attack: Palestinian terrorist Musbah Abu Sbeih murdered 2 Israelis and wounded 5 others in 3 drive-by shooting attacks in Jerusalem on Oct. 9, 2016. Abu Sbeih, who held Israeli residency status, began his shooting spree at the Ammunition Hill light rail stop and continued to the Shimon Hatzadik neighborhood. He was shot and killed by Israeli border police officers during the attack. Stabbing attack: 19-year-old Palestinian terrorist Muhammad Sa’id Ali stabbed several Israeli police officers near Damascus Gate in the Old City of Jerusalem on Oct. 10, 2015. 3 officers were wounded. The terrorist was shot and killed by Israeli Security Forces at the scene of the attack. Another Palestinian video on social media also promoted the murder of Israelis: TikTok is a social networking service and app where people can create and share short videos of up to 60 seconds long. It is owned by a Chinese company, and is available in numerous languages. It has been downloaded more than 80 million times in the US alone, and was the 4th most downloaded app in the world in 2018, following Whatsapp, Facebook, and Facebook Messenger. [Calcalist, Feb. 18, 2019] In Israel it is very popular among children.